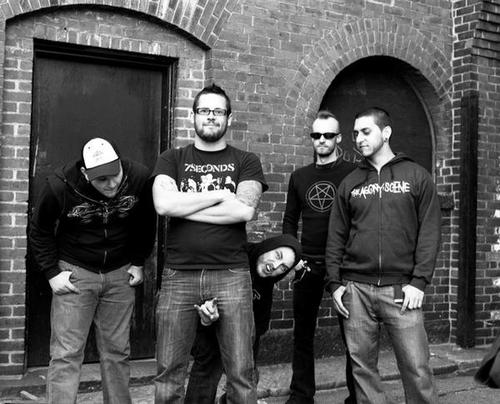 Rocksins were recently lucky to interview Brian Eschbach, guitarist of The Black Dahlia Murder when they hit London with Cannibal Corpse and Devildriver. Here’s what went down:

Hows the tour been going so far?

Good! About three weeks in, got four more days to go.

Whats been the most memorable show of the tour?

Shit man! Berlin was pretty cool, those are some pretty cool cats – they play it cool too like too cool for school sometimes! Sometimes its hard to get them headbanging but this time they went more apeshit. So that was fun, that was a gratifying return!

Are there any particular countries that are harder to connect with?

Germany can be hard in general you have really like any other country a bunch of compressed cultures but for the most part they are listeners so you don’t necessarily know whether you got across to them. But it depends if its Friday night you’re going to see a different german to the guy that was alive the night before.

Last time you toured the UK was with Skeletonwitch – do you have to tailor your setlist depending on the venue you’re playing?

Not really, tailoring the setlist just has to do with, usually how much time we have. A show like this on a big stage is all fine and dandy as long as there are people there to play to and something like underworlds great too because we love shows like that. Its easy for us to get our internal ball rolling when everyone’s crammed up against you.

Do you find it hard playing as a support band and not a headliner?

There’s different pro’s and con’s to each spot throughout the bill – playing first we were opening up the Dethklok tour with all that remains and machine head in the state and so there you are half hour after doors, people are still remembering their crap from work and its your job to try and get them going. Whereas if you’re the second band first band has already done that so you have to get them moving, and by the third band usually everyone’s having a good ol’ time then headlining sets great but people can also get burnt out towards the last quarter of that from the whole fucking show of onslaught.

Do you think there’s a virtue for the fans to be able to come to package tours like this?

Well, what we hope for on something like this is, having never toured with Devildriver before and being slightly different strains of metal coming into this situation we’re hoping to play not just to our fans but also to turn heads of Devildriver fans, or Cannibal fans or Hour Of Penance fans who haven’t seen us before.

What musicians are your biggest influences?

I’ve alwys been into neo-classical stuff, probably starting with Ritchie Blackmore from Deep Purple y’know Rock was pretty heavily pentatonic and bluesy at the time and here’s this guy throwing in this Beethoven shit all the over the place. More than any one specific person, I love melody I love hearing a new take on some old-ass scale.

Have you got any favourite countries or cities to tour through?

Whats fun?… Whats fun?… Erm, I love playing at home in Detroit really, thats where I fell in love with seeing music live and its always to go home and see people enjoying what you’re doing. But other than that, New Yorks fun once you’re parked getting in and out of there kinda sucks.

Which songs do you enjoy plying the most on your current setlist?

We’ve been playing I Will Return all tour and people respond to that. People must really have checked out that Equilibrium video because we usually play that second and people start going apeshit so that’s fun to play. The only ones I don’t like playing live are the ones people take a nap to. I can’t remember any off the top of my head but it just happens once in a while. Its like this is not the song for this crowd.

Do you play the sme setlist each night?

Yeah, each night we play the same.

So you don’t tailor it?

Well we’ve got anywhere from thirty to forty minutes so you gotta pick your songs and stick with it and if you wanna switch stuff out then you gotta rework the time again and all that.

Are there any that you like playing but don’t get to ply that much?

I’d love to be able to play couple more songs off Miasma but as we keep putting out music it becomes harder and harder to squeeze in songs from older stuff especially when you’re trying to showcase newer material.

So is it a challenge to create a balance between old and new?

Definitely, its something that we have to think about every time we put together a tour.

Who are some of your favourite bands to tour with?

Cephalic Carnage are good buddies of ours everytime we go out with them it’s a blast. Albeit they’re amzing musicians but those guys are just nuts and its always a good time, and Ccannibal of course this is like our seventh or eight tour with Cannibal Corpse we’ll have seen at least one Cannibal Corpse show for hundred nights of my life. We don’t watch them everynight just depends whats going on that day.

Are there any new up-and-coming bands that you really dig?

I mean, they’re not insanely new but Surreption from Sweden are awesome they’re recording a new album right now and Trevor did some guest vocals on one of the tracks but they’re just crushing.

Do you think you could deck a horse with one punch?

How old is the horse?

Probably not they’d probably stomp all over me. I don’t believe in myself that much.