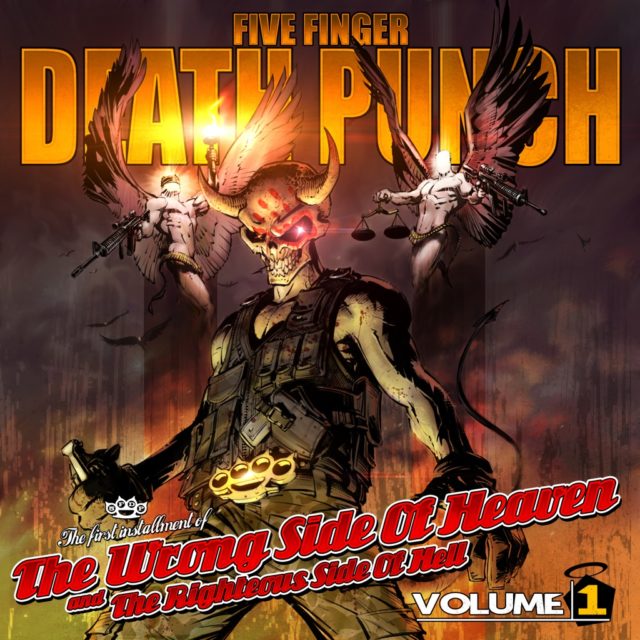 Five Finger Death Punch aren’t everyone in the metal world’s cup of tea. They’ve been called unoriginal and cynically over commercial and that’s just a couple of the more polite things that have been said. Despite their detractors, they’ve amassed a huge fan base, particularly in the US, where they have proved that newer metal bands can still sell albums in impressive quantities. In the UK their popularity has steadily grown, most recently evidenced by the enormous crowd they drew for a great set at the Download Festival (read that review here). Now FFDP stand at an important point in their career, the release of the first half of a double act of albums to be released in 2013: The Wrong Side Of Heaven & The Righteous Side Of Hell, Volume 1.

When Five Finger Death Punch get it right, there are few bands who can live with them in terms of producing a foot stamping, head banging anthem with a mega chorus, and lead single Lift Me Up (featuring the legendary Rob Halford of Judas Priest) meets that description and then some. It is one of the best album openers you’ll hear all year and gives the album great momentum from the beginning. Watch You Bleed carries on where Lift Me Up leaves off, and while Ivan Moody once again proves on “You” that he should leave the rapping in the metal world to Mike Shinoda and Fred Durst, the song has a breakdown that will go down very well live.

Something the band has always done particularly well is the “metal ballad”, and with the title track of the album (abbreviated to Wrong Side Of Heaven) they may have produced their best one so far. This will be a huge sing-along anthem at live shows for years to come. It is not just the first few tracks of the album that are enjoyable, the quality remains high throughout. Burn MF will lodge itself in your head, trying to get you to sing it to yourself at the most inappropriate moments. Dot Your Eyes (featuring Hatebreed’s Jamey Jasta) has a main riff that will invoke headbanging, accidentally or on purpose. M.I.N.E (End This Way) is also worthy of mention, as it is another admirable entry into the slower, sing-along collection of FFDP tracks. Last but certainly not least, the band have chosen brilliantly with their cover of L Cool J’s Mama Said Knock You Out (featuring Tech N9ne), which is about as infectious as they come and is one of the finest metal covers of recent times.

Throughout the album Ivan Moody is in particularly bullish mood, delivering a high quality level of vocal performance of both growled and clean singing with the swagger in his voice that one would come to expect from the frontman of the Death Punch. The riffs and solo’s from Zoltan Bathory and Jason Hook are among the best the band have crafted in their time together, and you could set your watch to Chris Kael and Jeremy Spencer’s rhythm section, who largely keep it simple but very effective.

This is arguably Five Finger Death Punch’s best work to date. The Wrong Side Of Heaven & The Righteous Side Of Hell takes everything that was good from the first two FFDP albums (as well as certain parts of American Capitalist), refines them and improves on them and this is the end result. This is an album that people will have to take notice of, in a very good way (and lays down the gauntlet to FFDP’s future touring buddies Avenged Sevenfold for their forthcoming album Hail To The King). One of the metal mainstream’s finest moments of 2013.