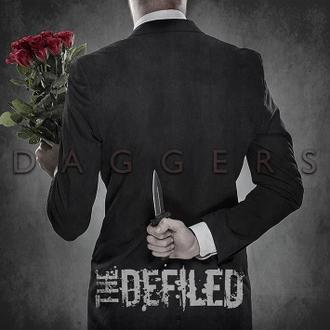 The Defiled’s second album Daggers, the follow up to 2011’s Grave Times, has been a long time coming. It’s been over a year since the band headed to Florida’s Audio Hammer studio to record with acclaimed metal producer Jason Suecof. Anticipation for Daggers has been on a constant rise, with fans eager to her how the band could top their début.

With opening track Sleeper, it’s clear that The Defiled mean business. The track starts with an intense instrumental before bursting into a frenzied riff and Stitch D’s trademark roar. A killer breakdown and a huge chorus make for a perfect album opener. This is followed by Unspoken, with a chorus to rival Grave Times‘ Call To Arms. Straight from the off Daggers in exuding passion and ambition.

Through it’s 11 tracks, Daggers is clearly a more emotive and personal album than it’s predecessor. The range of emotions on the album is emphasised by the final two tracks, firstly there’s the beautiful Five Minutes, with soaring electronics over an acoustic guitar and the sadness and heartbreak in Stitch’s voice. The album then ends with No Place Like Home, a furious track and possibly the bands heaviest yet.

At many points on the album The Defiled wear their influences on their sleeve, with White Zombie levels of groove on tracks like As I Drown, Stitch D’s Marilyn Manson-esque drawl, especially on the magnificently weird Porcelain, (Stitch also sounds like a heavy metal version of Kelly Jones from Stereophonics on The Mourning After, but it’s unlikely that Stitch would admit to him being an influence), and The AvD’s electronics which go from sounding like something Trent Reznor would be proud of, the ending of Fragments of Hope for example, to the black metal style keys on Sleeper.

But Daggers doesn’t sound simply like the sum of its influences, The Defiled have paid homage to the past while still crafting a unique sound. Many will argue that Daggers is an attempt at Americanising the band’s sound to replicate the success of bands such as Motionless In White, but there is an inherent Britishness to the album. Yes, it will likely do well with the American audience and fans of MiW etc. but in no way will it alienate the bands UK fanbase.

Metalcore super-producer Jason Suecof (responsible for making Trivium’s Acendancy and DevilDriver’s The Last Kind Words, amongst others, sound so good) has done an expert job at bringing the best out of The Defiled’s sound. As good as the production is, at some points Stitch D’s voice does feels lost in the mix. This leads to some of the chorus’s on the album that should be at the forefront to get over powered by synths. However, when a slight niggle about the production is the only fault you can find in an album, it speaks wonders for the quality of the songs.

The Defiled’s punky, thrashy, gothy brand of industrial metal is excellently showcased over Daggers‘ 45 minutes. If there’s any justice in the world this album will lead to massive things happening for one of British metals finest hopes.

Daggers is out August 5th 2013 on legendary metal label Nuclear Blast Records. Pick it up!