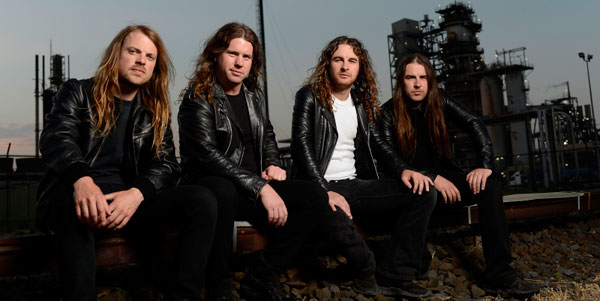 In the middle of a whirlwind schedule of European shows (as well as an awards show), Airbourne jetted in to Donington to make an appearance at the 2013 Download Festival on the final day of the event. A little while before they took to the stage Rocksins caught up with their guitarist David Roads backstage to discuss life on the road, their upcoming plans and what one of the other members of the band might get up to on this particular visit to Donington.

Rocksins: Airbourne have played Download a couple of times in the past. Last time you were here your performance got caught short due to a certain individual in your band scaling the side of the stage…

David: Yeah!
Rocksins: He’s not planning anything like that again today is he?
David: I couldn’t tell ya. What goes through Joel’s mind no-one else knows! He’s an enigma *laughs*. But I guess if they don’t really want us they’ll have a word before, or cut the power again. We don’t want the power cut on us again! But he’ll have something in store.

Rocksins: Would you say that this is one of your favourite festivals to play?

David: Oh yeah, we love coming back here, and coming back to England. When we were last out on tour in 2011 I think we played Knebworth, and it was the year before that we played here when we had the power cut off. But we always love getting back here.
Rocksins: I remember the first time you guys were at Knebworth (in 2009) and Joel climbing the stage and got away with it that day, in the pissing rain as well.
David: Yeah *laughs*, well that’s always the only downer of the festival isn’t it, it’s the weather. You don’t know if it’s gonna piss down with rain or what’s gonna happen. But the energy of this festival is great, the people are always right up for it, rain, hail or shine, they’re here to have a great time.

Rocksins: Are you on the full circuit of European Festivals?

David: Yeah, we’ve just done Rock IM Park and Rock AM Ring in Germany, we’ve done Sonisphere in France, we were in Switzerland last night and then we had to get a 4am flight to England this morning so we’re in the middle of a really brutal four day schedule. But that’s touring!
Rocksins: Is this the end of that run or is there more to come?
David: We’ve got the Metal Hammer Awards tomorrow night, that’s just a small set show, and then we’ve got a day off where we fly back to Rome, then we’ve got a show to do there and then we’re back into it. The routing of the tour is all over Europe so any days off are drive days or travel days.

Rocksins: As you’re off to the Metal Hammer Awards, will you have any time to catch up with any of your friends from other bands?

David: Yes we will. It’s a day off after so hopefully, and we’ll watch a bit of Motorhead as they’re playing after us. We’ll have a few beers and enjoy the rest of the night.

Rocksins: The new album (Black Dog Barking) has done very well for you guys, I know it charted well here in the UK and in various other places, you must be very pleased with the reaction…

David: Yeah it’s been goin great. I’ve been reading great reviews of the album, the feedback from the reviews is everything that we set out to do with the album. We feel like we’ve risen the bar again with this one. The new songs have been going down very well live with the fans, songs like Ready To Rock the crowd have been singing it before we even go on stage!
Rocksins: Awesome.
David: Yeah, so that’s exactly what we set out to do. It’s been going really well.

Rocksins: Why did you choose Black Dog Barking as the title for the album?

David: There’s a few different meanings to it. Joel and I came up with the idea. One of them is that we always have these sayings that come into the band lingo, like No Guts No Glory was the same, like there’s no way but the hard to pick yourself up. Black Dog Barking is like the good times and bad times of touring, there’s times where you feel like you’ve got a black dog on your shoulder riding you the whole way. We felt like that would be a great name for the album. Also there was a bit of a World War II meaning to it as well with Winston Churchill, didn’t they call him The Black Dog? Or something like that. He was a take no bullshit kinda guy, y’know? That’s what I like about rock n’roll.

Rocksins: Once you finish this run of festivals do you have any plans lined up past that?

David: Yep, we’re coming back here for a headline tour in November / December and Europe too, that’s when we’ll play the majority of the songs off of the new album. We’re already doing quite a few of them but it’ll be a proper album headline tour. We’re doing a bit of America and Canada before that too, but after this run we’re going home to Australia for a couple of shows and then back over to the States.
Rocksins: Have you spent much time in the States so far on this album run?
David: Yeah, we were there in April and did some headline shows and did some support shows with Shinedown. Then it was a couple of shows in Canada and straight over here. I guess you could call it a warm up tour as the support slots with Shinedown were only like half hour sets or forty minute sets. We hadn’t really played for the last year and a half as we’d been doing the album so it was a bit of us getting tight as a band again before coming over here and hitting the real stuff, like Download *laughs*.

David Roads and the rest of Airbourne will return to the UK this November and December for an extensive headline tour, with support coming in the shape of Cambridge rockers The Treatment and stoner metal legends Orange Goblin. Full details of the tour can be read here on the original announcement.

Airbourne’s new album Black Dog Barking is out now on Roadrunner Records, click here to read our review of Black Dog Barking. If you want to keep up-to-date with Airbourne on Facebook you can find them at Facebook.com/AirbourneRock.