(This review of ‘Echogenetic’ precedes an interview I recently did with Bill Leeb himself, in which we discuss the background and construction of the album. Check out Rock Sins in the next few days for the interview itself!)

A haunting industrial ‘resonance’ (appropriately it’s title too) starts proceedings and it feels very much like the modern-day industrial EDM you’d come to expect from a band with a such a formidable legacy such as Front Line Assembly.

It feels as if you’ve dived headlong into a mainframe; swirling, deep and crushing rhythms link with the electronically super-charged vocals and it very much has a Nine Inch Nails / Fear Factory vibe. That said, to compare FLA to NIN / FF seems wrong considering the order of precedings; one thing that definitely stands out is the indisputable ‘dub-step’ element of which FLA have introduced to their music. Gone are the crushing guitars of the ‘Millennium’ era and a wall of electronic noise and crescendos interweave as you process the majesty of ‘Leveled’.

‘Killing Grounds’, in many ways, is a great summary of the entire album in one track. Incredible loops and beats flow through circuits with a infectious energy and there is very much a clear indication that this is ‘old school’ industrial messing around with it’s more modern day counter-parts. As the tracks plays out, I imagine myself surrounded by smoke, sweat and pulsating lights in the underground of a secret club. Though the unmistakable blend of that for which they are famed and the modern day styling of ‘dub-step’ (of which I am not a big fan) are undoubtable, I can only struggle to find fault with it. Not only does it sound like a natural progression, but it feels as if Bill, Jeremy and Jared are laying down the gauntlet of how dub-step SHOULD sound.

When I first heard ‘Deadened’, it led to me marching the route to work where normally I would be walking at a snail’s pace. It is indicative of a melodic rhythm captured so perfectly that you literally cannot help but be overcome. I found myself giving those around me the ‘evil-eye’ as Bill Leeb’s hypnotic and heavily charged vocals and lyrics made me feel as if I was listening to the same thing as the T-1000, should he have had a MP3 player…

Mid-album ‘Ghosts’ brings back to visions of the club and I feel this is the soundtrack for a ‘personal’ moment on the dance-floor as you are caressed by the calming and soaring melodies. Dare I say it, but this song is almost a soundtrack for my summer. It’s inspiring, evoking and quite simply, fucking fantastic.

That said, to call the music of 2013-era FLA ‘dub-step’ entirely is unfair to them; yes, it brings in the elements of hypnotic, drudging bass and anvil-esque crescendos, but it is nevertheless industrial to it’s core. Title track ‘Echogenetic’ follows on in the same vein and (along with ‘Exhale’) is arguably the heaviest dub-step influenced one of the lot.

In summary, the album is dark, mesmerising and haunting. But it’s also sheer brilliance; an evolution of genius that can only come from years of honing a craft that is becoming more commonplace. Not as ‘violent’ or as harsh as some of their past work, there are elements fused from all aspects of their peers, familiars and side-projects and it comes together as a welcome and hugely accessible release.

(I wasn’t sure where best to place it, but I wanted to mention the interesting fact that Bill Leeb is also responsible for the side-project Delerium, who’s flawless track ‘Silence’ is probably more well known than any of the material he’s produced elsewhere. I don’t agree it should be that way, but it’s an interesting fact nevertheless… Give ‘Silence’ a listen and you’ll recognise that you’ve heard it in one of it’s many, many, many remixed forms…)

As those that know me or this site will know, I am a huge, long-time fan of all the the outputs of both Front Line Assembly and Skinny Puppy, two bands so closely linked and respected that they are (in my eyes), the two remaining forefathers of modern day electronic industrial music (there is an argument that list could and possibly should include Nine Inch Nails… though I will entertain that another time). I have to say, whilst my love for the two stemmed from my discovery of SP, FLA have most definitely upped the game with ‘Echogenetic’.

Imitators of which there are plenty, visionaries and magicians of the craft there are few, but FLA stand head and shoulders above pretty much every else. 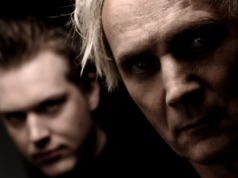 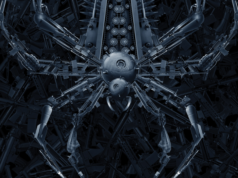