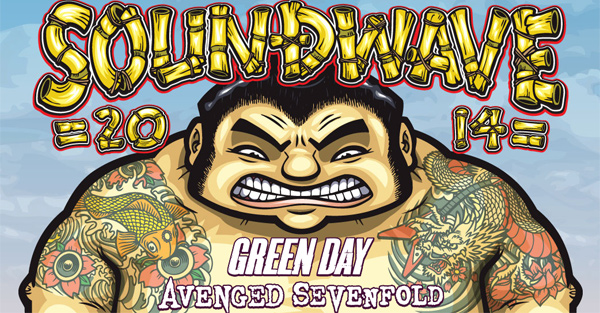 It’s that time of year where we start getting the first festival announcements for 2014! Since our friends down under tend to kick off festival season with Soundwave Festival, it seems only right that we’ve been given the Soundwave 2014 line-up this morning, and to say it’s impressive is something of an understatement.

After having to cancel a previous Australian tour due to frontman Billie Joe Armstrong’s personal issues, Green Day make good on their promise to return to Australia as headliners for the 2014 Soundwave Festival. Sub-headlining them will be California’s metal band of the moment Avenged Sevenfold, who will be showcasing what will potentially be their biggest album so far, Hail To The King.

The rest of the line-up for Soundwave Festival 2014, much like certain European festivals such as Download and Rock AM Ring, is a veritable pic n mix of rock & metal star acts of all shapes and sizes. Among the most prominent names on the bill are The Stone Temple Pilots (complete with Linkin Park’s Chester Bennington on vocals), Alice In Chains, KoRn, Megadeth, Alter Bridge, Placebo and the man who doesn’t know how to put on a bad show, the one and only Rob Zombie!

Those Aussies who love their metal should be pleased with the additions of the likes of Down, Trivium, Devildriver, Amon Amarth, Terror, The Black Dahlia Murder and Whitechapel, not to mention Newsted, thrash veterans Testament and Five Finger Death Punch! Those who enjoy something a little lighter or a bit different should be very pleased with the likes of Skindred, Clutch, Biffy Clyro, and what could be Bowling For Soup’s last ever trip down under! For the full current line up please head over to www.soundwavefestival.com. More additions have been promised and we’ll keep our readers posted when any more acts are announced.

Tickets for Soundwave Festival 2014 go on sale to the general public on Thursday September 5th 2013 at 9am. We imagine there may be quite a rush when they go on sale.