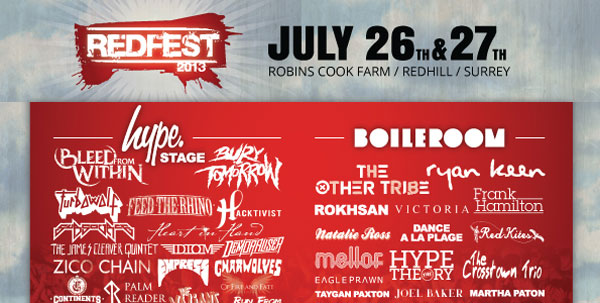 We recently sent James to a field in Sussex to review Redfest – a small, independent festival that’s been going for a few years now. What is especially impressive about Redfest 2013 is just how diverse the line-up is. Any festival that can book Scottish bruisers ‘Bleed from Within’ to play at the same time as Radio One favourites Bastille has our admiration.

After arriving on-site and setting up camp it’s time for the first Rocksins-friendly band of the weekend – Max Raptor. (8) They weave their gritty punk with remarkable skill closing their set with the first (and certainly not the last) wall of death of the weekend. After that it’s a quick dash over to the Hype stage to catch a precious 15 minutes of Palm Reader (7) who put on a visceral enough performance, but Rocksins can’t help but think they’re having a slightly off day.

After a quick chat with Bury Tomorrow it’s off to see Gnarwolves(8) who turn in a solid set of melodic punk (with added blastbeats.) There’s just enough time to catch the first three songs of math rockers Arcane Roots(7) before Idiom(8) take to the Hype stage showcasing their Katatonia meets nu metal sound. It’s an enjoyable performance punctuated by a brief cover of ‘Too Close’ by Alex Clare which works far better than it should do. After a quick chat with Palm Reader, Ska band Dub Pistols(7) entice Rocksins in for a few songs keeping smiles wide and dancing awful.

Heart in Hand(9) the next band up on Hype provide one of the days big surprises with their well-crafted hardcore. Another revelation are Engine Earz(7) on the main-stage– like Dub Pistols they’re hardly your typical Rocksins fare but their mix of hip-hop and dub-step is still enjoyable enough on a summers afternoon with cider in hand. Hacktivist(6) again fail to impress, leaving the day to belong to Bury Tomorrow(9.5) who open with an outrageous double kick of ‘Lionheart’ and ‘Sceptres.’ They’ve got all the ingredients to be huge – fantastic songs like the aforementioned ‘Lionheart’ and a charismatic front man in Dan Winter-Bates, all topped off with a musically tight stage show. It will be interesting to watch the progress of this band over the next 12 months.

So that was Redfest day one! Our report on the second half of Redfest 2013 will be available to read soon so please keep checking back for it.