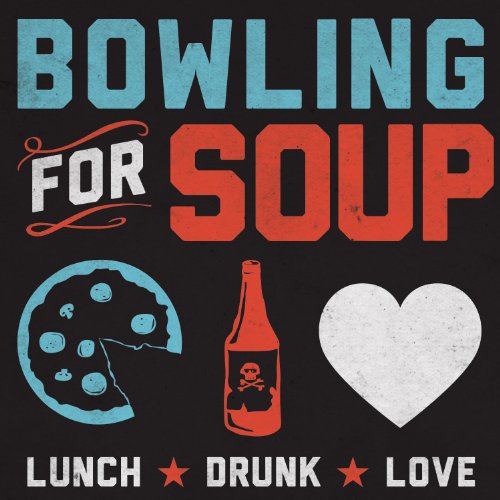 Back in the Spring, Bowling For Soup front man Jaret Reddick announced to the dismay of thousands of their UK fans that their annual October tour of the UK would be the band’s last tour of the British Isles. With the tour rapidly approaching, there also comes a brand new Bowling For Soup album, which has been funded by a very successful PledgeMusic campaign (which achieved well in excess of the pledge target). Following a fully interactive process with their pledgers, which even involved helping to select the name of the album, Lunch. Drunk. Love. was released to the BFS pledgers, and the album will get it’s full UK release in two weeks time. Here’s our lowdown on the album ahead of it’s full release.

Lunch. Drunk. Love. contains everything one might hope to find on a Bowling For Soup album; Plenty of infectious, catchy, up-tempo pop punk songs with massive choruses and lyrics that don’t take themselves too seriously. But there’s also the occasional more serious track which they have proven equally as adept at in more recent years (such as Turbulence from previous album Fishin’ For Woos). Lunch. Drunk. Love. also displays an extra level of maturity and assuredness to the song-writing but still maintains the youthful enthusiasm which is part of the Bowling For Soup sound, perhaps as a result of both Jaret Reddick and Erik Chandler expanding their horizons on their respective side projects over the last couple of years.

It is difficult to pick out the most enjoyable songs on Lunch Drunk Love because virtually every song carries it’s own merits. Opener Critically Disdained begins with an acoustic intro before picking up the pace with a great bass line & firmly tongue-in-cheek lyrics. And I Think You Like Me Too has elements of a folk/country vibe to it (a good thing in this instance). I Am Waking Up Today is a motivational speech wrapped inside a three minute pop punk song. However, the award for pick of the bunch has to go to Normal Chicks, an anthem dedicated to the beautiful “normal” (non size zero or surgically enhanced) ladies in our lives, with lyrics that will make all but those with the most miserable sense of humour crack a grin every time they hear it.

Lunch. Drunk. Love is an album by a band that is entirely comfortable in it’s own skin, completely happy with their trademark sound but still capable of enhancing that sound which has been honed over the last fifteen years plus. It’s also the sweariest Bowling For Soup album this reviewer can remember, perhaps reflecting that a portion of their fans have grown older with them (but there is a clean version also available as a nod to their substantial younger fan base). With previous album Fishin’ For Woos BFS bassist Erik Chandler told Rocksins that the band were looking to return to closer to their original sound after a period of experimenting. Lunch. Drunk. Love. sits somewhere between the two camps, but feels the most natural album to come from the band in a very long time. The forthcoming tour in October promises to be a very bitter-sweet occasion, but if Bowling For Soup keep making albums like Lunch. Drunk. Love. it will make their absence from our shores a lot easier to handle.