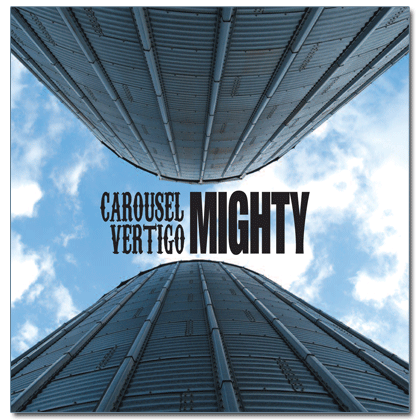 There’s been some interesting things happening in the world of classic rock over the last twelve months or so with a batch of new bands coming to the fore, carrying on the traditional rock & roll approach for the next generation whilst at the same time putting their own slant on things. In addition to the likes of Canada’s Monster Truck and the UK’s own Voodoo Vegas, one such act are American / French act Carousel Vertigo, who are gearing up for the release of their début album Mighty. So, are they, and their début album, any good?

Technically, Carousel Vertigo are very good. There’s some nice riffs and solo’s spread amongst the album, and There are some nice riffs and vocalist Vincent Martinez (who also plays guitar) has an impressive range. Vincent is also able to adapt his style across the album with elements of a southern drawl to his voice at times, a Bostonian effect in the style of Aerosmith’s Steven Tyler and more of the Brian Johnson AC/DC rasp at others.

There are a couple of songs to look out for in particular; The album closing Last Call For Love is a particular stand out, evoking memories of Aerosmith at their blues rock best while I’m A Coming World is a spiky, high impact track with a huge guitar sound, a nice solo from Vincent’s co-guitarist Jansen Press and an impressive turn from Martinez. The solo in Long Highway is also the most memorable piece of instrumental work on the entire album and one any rock guitarist would be proud of.

The problem with Mighty is that for all it’s enjoyable qualities, it’s an album that feels quite safe and that it has all been done before to some extent. This is only Carousel Vertigo’s first album, so there’s plenty of time for them to carve out their own unique niche in the classic rock world and find their signature sound. It’s just a shame they didn’t take a few more risks as they sound like a band who, musically, could have easily pulled it off.

Carousel Vertigo will be playing an exclusive UK album launch gig at London’s The Borderline on the day of the album’s release, October 28th 2013. Tickets are available from the band’s website at https://www.carouselvertigo.com/shop.asp.