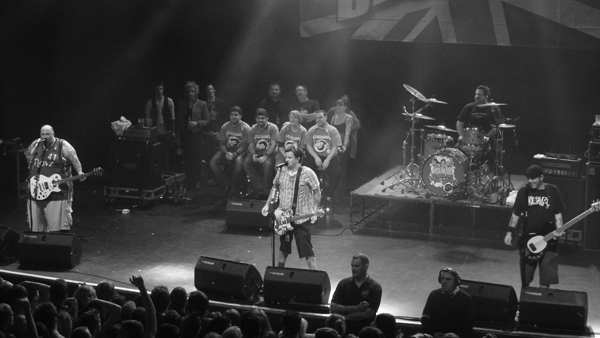 Bowling for Soup return to Glasgow, for what may be the last time ever, to give Scotland another night of upbeat, fun pop-punk.

Earlier this year, pop-punk veterans Bowling For Soup announced that their 2013 UK tour would be the last extended tour they’d ever do on our shores. Their (possibly) final Glasgow show was nothing short of a celebration of a spectacular career. Up first were Patent Pending, who did a stellar job of warming the crowd up. But it was clear that every person inside the Academy was waiting on the arrival of BFS.

Treating fans to a mix of smash hits (Punk Rock 101, 1985), new tracks from this years Lunch Drunk Love, classic album tracks (Almost, Ohio), and even a couple of covers of Fountains of Wayne’s Stacy’s Mom and Britney Spears classic Hit me Baby One More Time. This was everything a Bowling For Soup fan could ask for.

The band, as always, were on top form and their usual stage banter between tracks was as funny as ever. After years of bringing their annual tour to the UK, it definitely feels like this years was the ideal way to wrap it all up. With frontman Jaret Reddick thanking the Glasgow audience for years of support for his band. The ovation as the band ended their set with the classic 1985 was deafening, it’s clear Glasgow will miss the band. Autumn just wont be the same without a Bowling For Soup show.

Bowling For Soup’s new album Lunch Drunk Love is out now on Brando Records. Read our review of the album right here.