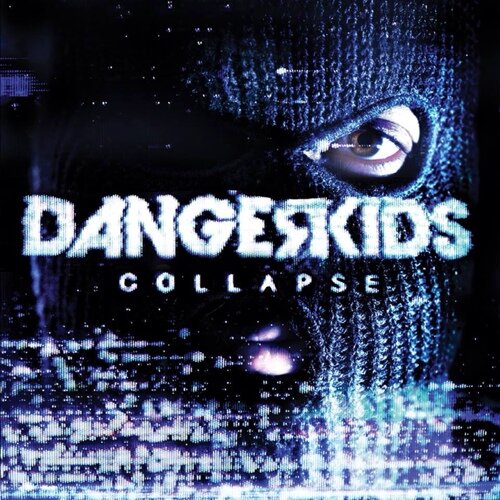 Dangerkids are a 5-piece band from Ohio who were formed in 2012. Having gained considerable attention they were signed up by Rise Records and have recently released an album titled ‘Collapse’. This record has proven evident the group have found the perfect blend of genres between electronic music, rap, rock, hardcore and some nu-metal. Dangerkids have the style that was huge a few years back and a lot of resemblance musically to ‘Linkin Park’, which could potentially grab a lot of listener’s attention.

It all kicks off with ‘Countdown’. Static music comforts a countdown towards the collision of the full band including vocals screaming, “Lets go!” This track shows exactly what they are like and doesn’t waste time getting stuck in. The track fades for the first rap verse then bursts back into life with heavy riffs, shouting and punchy beats that could possibly relate to bands such as ‘Asking Alexandria’ or ‘We Came As Romans’. This song is a great choice to start the record.

The electronic keyboards and drums for intros and rap verses are a re-occurrence throughout the album. ‘Light Escapes’ show this again with the intro pacing the listener to another full band explosion. The lyrics explain how for some people it can be difficult to expose and express, ironically they also reference ‘Linkin Park’ in the song “he’d put his favourite records on ‘Innerparty’ and ‘Linkin Park’”.

‘Hostage’ brings a new level to the band with more head banging riffs, another powerful chorus and tough breakdowns. Many of the lyrics can portray being in a mosh pit, just one example: “so give me your worst”. Fans of nu metal will find much to enjoy here. ‘We’re All In Danger’ is one of the highlights; the vocals have more presence in this song and grab your full attention with remembrance of teenage angst.

‘Waking Up’ is quite raw, about being hurt and wishing to be someone else; where as ‘Destroy Yourself’ lyrically is a progression from that state, growing from the inside “Destroy yourself and start again”. With the soft vocals and great synth sections they also add some extra sound effects for the vocals.

‘Unmade’ stands out because it’s a little different to the rest of the record. The softer and welcoming vocals steer you towards the chorus with a big mixture of gated synths, The instrumental ‘Where The Sky Breaks’ then serves as a well thought out orchestral ambient piece which leads beautifully into ‘Paper Thin’.

‘Paper Thin’ is a very strong track. Catchy hook, well balanced mix of what they have already brought to ear. This song has anthem ability for this group, lyrics in particular: “Until you’re broken you don’t know what you’re made of” Then during another eargasm of a breakdown – “from the top of the world – I can see where the sky breaks”.

‘Fractions’ has another opportunity for singing along; with a lot of group vocals near the end giving off a unity feel. ‘Dust’ then appears as another instrumental giving suspense and depth for the next song with more synths and drum beats disintegrating for the last track of the record ‘Cut Me Out’ which is more generic compared to the rest of the record, but still is good as an outro.

This album shows a lot of promise. With the skills each member has, if they experiment in an adventurous way with future releases they may be able to define their own unique sound. If they can achieve this, they could be an influential band.

For Fans Of: Linkin Park, We Came As Romans
Stand Out Tracks: Paper Thin, Hostage, and Unmade