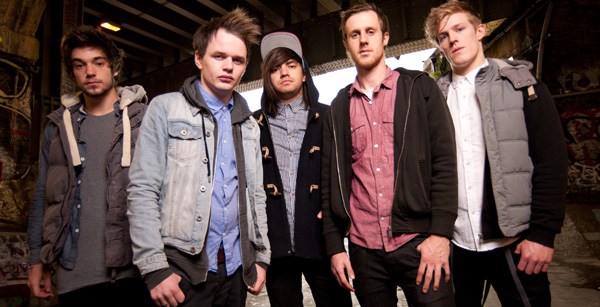 In our latest installment of backstage coverage from the 2013 Download Festival, Jamie caught up with guitarists Henry Selley and Josh Wreford from UK rockers I Divide. Having shot to prominence at Download previously having won the Redbull Bedroom Jam, 2013 saw them opening the Zippo Encore Stage on the Saturday of the event. Read on for their thoughts on that, touring, this years’ Redbull Bedroom Jam and more…

Rocksins: The obvious question first lads, how did it go?

Henry: It was amazing, so good.
Josh: There were so many people. We were a bit worried about the weather and things, and playing an outdoor stage, that time of the morning as well. But the fans turned out for us, we managed to get a massive crowd and put on a good show.
Henry: We’re very happy!

Rocksins: It must be quite something for you guys having won the Red Bull Bedroom Jam and playing the fourth stage to get to where you are now.

Josh: It’s a scary jump really isn’t it?! We played fourth stage last year and that was incredible, there were people spilling outside of the tent and stuff like that. Then we were speaking to Dave from Live Nation and he was like you guys are playing this year. So we thought cool, are we playing the Pepsi Max (third) stage? Then he just went “so you’re playing the second stage” and we just went “uh, what?!”.
Henry: “Like, really, really?!” and he was telling us we’d be fine and we were just thinking “oh god, lets go for it”.
Josh: We were very excited definitely but it was just such a mental stage and it’s massive and all the crew backstage are great; There’s like thirty or forty people backstage doing everything for you…
Henry: Best crew ever.
Josh: I hardly touched my gear until we played.

Rocksins: Fantastic! Did you guys come up this morning or have you been here for the whole weekend?

Josh: We came up on Wednesday so we’ve been here for a few days.
Henry: First band here pretty much. We’ve been getting around, spreading the word a little bit and partying hard, it’s been really good, a really good few days.
Rocksins: Do you have leave today? Or will you be here for the duration?
Josh: We’re here right through until Monday, partying on and having a good time. We’ve got a lot of our friends in other bands here and a lot of bands we want to see. I’m really looking forward to checking out Enter Shikari after we finish doing our press, and then Rammstein tomorrow.
Rocksins: Rammstein are something special.
Josh: Yeah, and Slipknot last night were incredible, I’d never seen them before. Europe was pretty cool as well.
Rocksins: Sadly I missed Europe.
Josh: Mate! You missed out, they were really cool.
Henry: Papa Roach as well, they were mental, really enjoyed them yesterday. It’s cool to be able to catch a few bands because last year we came here and we hardly saw anything because we were so busy. This year today is our busy day but later today and tomorrow we can go back to watching other bands, it’ll be cool.
Rocksins: It’s nice as you say that you’ve been able to spend some time on the ground as it were and spread the word, have you been up in the village and trying to see as many people as possible?
Henry: Yeah, we’ve been up there flyering, wandering around, trying to hand out loads of flyers while having fun.

Rocksins: Have you just come off of tour? I know you played a show in Exeter last week.

Josh: We’ve done a few shows and a few tours recently, we’ve done a couple of headline tours like the OurZone Found tour with bands like The First and Underline The Sky which was awesome. It was amazing for us because it was our first real headline tour, and we’d just come from the Funeral (For A Friend) tour which was just amazing, we had nearly a whole month with those guys and they were a big influence on us. It was nice to see what was going on in the rest of the world, Devon’s rather far away from everything else.
Henry: We managed to do sold out shows in London and Birmingham which was wicked for us with us headlining, it was really nice to see the fan base and kids were telling us they’d travelled 200 miles to come to the shows which was awesome. We love Exeter but coming from there there’s just nothing around there.

Rocksins: There must be nothing like someone telling you that they’ve come from half the country away to see your show….

Josh: It’s crazy. At the London show we had people come from Norway and Germany.
Rocksins: Awesome.
Henry: When people tell you that you almost don’t know what to say to them. They tell you they got on a flight to come see you and it’s just mental.
Josh: Thank you?!
Henry: So we just have to make sure our shows are as good as possible, give it a hundred and twenty percent!

Rocksins: Do you have much in the diary for after Download?

Josh: We just finished recording our début album in the last month or so which we’re really, really happy with so we’re going to do a hell of a lot of promotional tours. We’re playing a few other festivals like Make A Scene Festival so it’s just going to be a lot of promotion for the album and then touring for a few months straight after that which will be announced soon.

Rocksins: Does it feel quite strange for you having come through the Red Bull process and now seeing the next batch coming through, what do you think of the current crop if you’ve seen anything of them?

Henry: We’ve been following it as much as we can, we’ve checked out some of the videos and we’ve been trying to keep up with the Top 8. The format is a bit different to when we did it last year but to give bands like us the chance to play somewhere like Download Festival and take that experience and potentially go on to do better things with it, it can be life changing, it can change the whole course of your life.
Rocksins: Do you think after appearing here last year everything completely changed for you?
Josh: It was a massive, massive help. It led to a lot of press and a lot of people saw us who didn’t know who we were before. We were plugging away before then but it was really good promotion, we got things like the Funeral tour off the back of that and we’ve managed to get a really good management team and our record label. We’ve got an A team behind us now to help us push the album this year.

Rocksins: Is there any tentative release date for the album yet?

Henry: All we know is Autumn, pretty much. Autumn but nothing’s been set in stone just yet, like the scheduling for the release of singles and things. We’ll have a few out before the album. We released our single Follow Me last week and we’ve done a music video for it and things like that.
Josh: It was this Monday just gone and we’ve had an amazing response from that.

Rocksins: One last question which we’re asking to everyone across the weekend; Can you give us an interesting or funny story involving yourselves or the others in the band from your time on the road?

Josh: We have got a few funny stories, for a start how Henry played our tour with a broken arm because he broke his arm in a mosh pit at the Slam Dunk Festival!
Rocksins: Oh shit!
Josh: Yeah.
Henry: There were wires in it and everything. But I still managed to play a couple of songs a day which was fun.
Josh: We’ve done some pretty mental stuff, we were on tour with Funeral For A Friend earlier this year and we decided to stage invade their last song wearing only our underwear *laughs* without them having a clue that was going to happen.
Rocksins: That’s pretty cool *laughs*
Henry: Yeah, you never know how they’re going to take stuff like that, but we just went with it spur of the moment.
Rocksins: Did they take it well?
Josh: Yeah they did, it was the last night of the tour and it was a good laugh. We were just running around in their underwear and we saw everyone’s cameras coming out taking pictures you just think “oooh god, this is gonna end really badly”.
Rocksins: This’ll be on Facebook and Twitter in the morning….
Henry: Yeah, and it’s never going away *laughs* but there are lots of pictures of that, I’ve seen a few, and it’s funny!

I Divide are currently hard at work on finishing off their debut album, which is scheduled for release in early 2014. Any further updates from I Divide will be available here when we have them. Please keep checking back with Rocksins for the latest in interviews with the great and the good from the world of rock & metal.