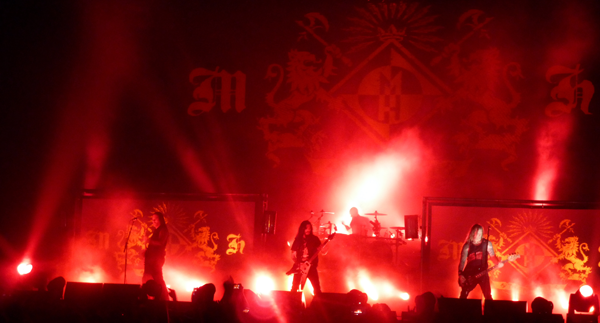 Following months of speculation as to where they might end up following the conclusion of their record deal with Roadrunner Records and a lot of negotiations, it has been announced that the mighty Machine Head have joined forces with the equally mighty Nuclear Blast!

In what seems like a match made in metal heaven, the deal will see Machine Head reunited with former Roadrunner legendary A&R man Monte Connor, who has made them his highest profile signing so far since coming on board at Nuclear Blast. Machine Head’s new musical home will be with the newly created sub-division of NB, Nuclear Blast Entertainment, which is being headed up by none other than Monte Connor himself. Needless to say, Mr Connor is quite excited about the news:

“I feel incredibly fortunate to say I have signed MACHINE HEAD – for the third time! They wrote one of the greatest metal albums of all-time as their debut and then turned around and beat it 13 years later. MACHINE HEAD have produced some of the best material of their storied career over the course of their last three records, and like a fine wine, they just keep getting better with age. The songwriting in this band is beyond evolved compared to the majority of their peers, and as a lyricist, Robb Flynn is second to none. On the live front, you’d be hard-pressed to find a more commanding and dominating band.

Ever since the launch of Nuclear Blast Entertainment, one of my main goals has been to reunite with MACHINE HEAD. I am grateful to MACHINE HEAD for continuing to put their trust in me as well as my new partners at Nuclear Blast, who share my passion for and commitment to the band.”

Equally as enthusiastic is The General himself, Machine Head frontman Robb Flynn:

“Monte Conner has believed in Machine Head for 20 years, his belief has never wavered, and we are extremely proud to work alongside him once again. When I visited the Nuclear Blast compounds in both Germany and Los Angeles last year, the vibe and spirit that Markus Staiger, Gerardo Martinez and their respective teams created took me back to the spirit of the old Roadrunner Records days, back when bands like Obituary and Sepultura were changing the world with their music. Everyone believes, everyone wants it for the right reasons, it’s about creating and respecting a culture, about pioneering new ways for people to discover great music.”

Machine Head, complete with new bassist Jared MacEachern who came onboard during the summer replacing long time bassist Adam Duce, will be heading into the studio shortly to begin creating their first album for Nuclear Blast Entertainment with extensive touring planned for 2014 once the album is complete.

Any futher news from the Machine Head camp or Nuclear Blast Entertainment as well as the daily best in rock and metal news will be found here at Rocksins so keep checking back.