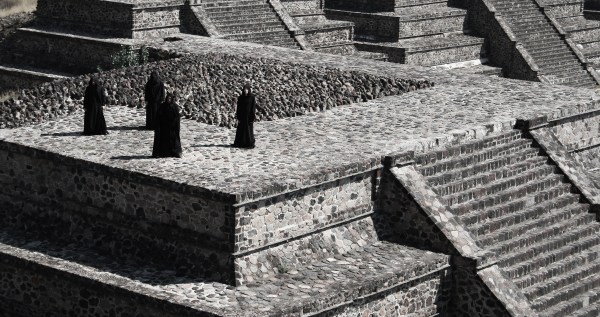 After a long time and periods of hard deliberation, drone noise legends SUNN O))) have today announced they have decided to establish a permanent web presence for the band in conjunction with their record label Southern Lord. The site, which can be found at https://sunn.southernlord.com/, will be the primary location to get hold of all of the bands releases. In addition, SUNN O))) plan to re-release and reprint classic merch designs to be available exclusively through the site with new items available roughly every three months. The website will also be the only place to acquire certain rare SUNN O))) musical offerings.

One of the first exclusives to be made available through the SUNN O))) site will be a deluxe vinyl release of their 2005 acclaimed album Black One. Several special different coloured pressings of the vinyl will be available both through the bands site, through Southern Lord and an exclusive Record Store Day version of 1,000 copies on black vinyl will which be made available November 26th 2013 as part of Record Store Day celebrations. Through the SUNN O))) online store special White and Grey versions of the Vinyl will be available, each limited again to 1,000 copies. A white version of the vinyl will be made available through Southern Lord’s European arm (visit their Facebook page here) soon. This will be a European only exclusive release. Details of the Black One Vinyl release can be found below:

Side A
Sin-Nanna 2:19
It Took The Night To Believe
Cursed Realms

Side B
Orthodox Caveman
Candlegoat

Side C
Cry For The Weeper

In addition to revamping their online world and the Black One album special release, SUNN O))) have also announced plans for two shows in Belgium and The Netherlands. The performing line up for the band for these shows has not yet been confirmed, but regardless of who is behind the instruments, it’s guaranteed to be quite the experience. Full details of the shows can be found below:

Further updates from the masters of drone will be available here when they make any further announcements. Thanks to Southern Lord and Gisele Vienne for the awesome photo.