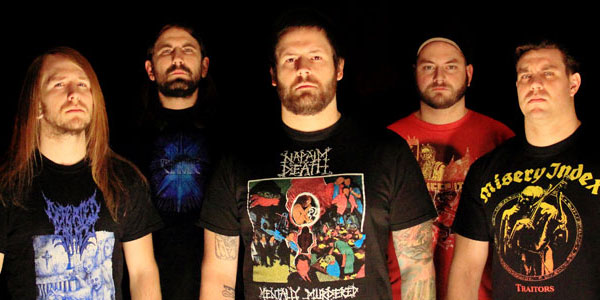 There’s not been many yet but how have the first couple dates of this tour gone for you guys?

Alan: They’ve been cool, France last night Trevor was like “I wanna see everyone get here and go crazy”, he just meant stage diving and stuff but we literally ended up with half the crowd up there, they just stood there and headbanged or taking pictures with their friends up there, it was pretty funny.

Are there any shows coming up that you reckon could be stand out shows?

Alan: I don’t know for sure because I’ve only done a European tour once and we’re playing smaller shows but I dunno, I missed Norway last time we were here so that’ll stand out to me I guess.

How has the rest of your summer been?  Particularly Warped Tour?

Alan: It was interesting, there’s like 80 or 90 bands playing each day so it’s definitely one of the biggest tours I’ve ever done, but that definitely had its perks, like we’d play places with like a waterpark or theme park right next door so we’d all get in for free. The bands were also pretty different for us guys, we were like the deathmetal band of the tour so it was cool getting to play to people we don’t usually play to, but it’s nice being back on tour with heavier bands (laughs).
Rocksins: So like you said, you were by quite far one of the heaviest bands on Warped, did that put any pressure on the tour?
Alan: No, definitely not, I think it just made us do what we do but even harder to try and really show people what we’re like.
Rocksins: Did you meet or watch any bands there you really got on with or enjoyed their sets?
Alan: Letlive. were really badass, they have a great live show and just great musicians, and I really love Billy Talent so I was stoked that I got to see them.

So moving onto the album, it was said quite a bit that you believed Everblack had a lot to live up to after Ritual, do you think it achieved what you wanted it to?

Alan: I think so yeah, we just wanted to put out a variation of our sounds, and I think it achieved exactly what we wanted it to, it was very successful.
Rocksins: Did having a completely new rhythm section in the band change the writing style of Everblack?
Alan: Not too much, all that stuff was pretty much ready to go by the time I heard it, so I kind of followed s lot of the drums that they had demoed, I added my own things here and there, but it’s pretty close to what they had it as.

Are you basing your setlist for this tour particularly on Everblack?

Alan: No definitely not, we’re playing just over half the album  but we have songs still from every album so you’ll get to here the whole catalogue.

This is quite an extensive tour and then you’ve got shows like Soundwave in the not so distant future, but have you got any other plans for this rest of 2013 and early next year?

Alan: I think we’re going to talk off December and January, maybe we’ll get something going after that but as of now, Soundwave’s all we’ve got.

It’s talked about between fans sometimes but what do you guys consider your music as? Death Metal, Extreme Metal or totally something else?

Alan: I would say it’s Melodic Death Metal, for obvious reasons, you just listen to the guitar work and that sums it up right there.

Last question, what do you think is crazier, a kid breaking his leg during one of your lets or the couple who supposedly had sex in the middle of the pit at your Bloodstock show last year?

Alan: Oh God, having sex for sure (laughs), you know, you’re surrounded by people watching, you’re hoping you don’t get trampled and you’re hoping you finish too! That’s definitely the craziest and most surprising thing to me (laughs).

The Black Dahlia Murder’s current album Into The Everblack is out now on Metal Blade Records. Stay tuned to Rocksins for an exclusive photo gallery from their London show on their 2013 European Tour.