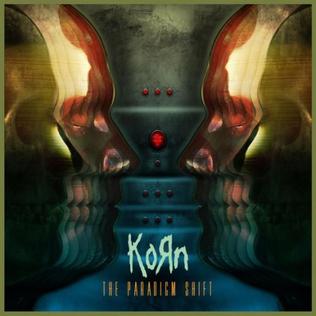 On their last album The Path Of Totality, Nu-Metal legends Korn began to reinvent themselves by introducing dubstep to their sound which helped to bring new life to the band. Now on their latest release The Paradigm shift it seems that Korn are taking a step back to their 90s roots, perhaps helped by the fact this is album marks the return of original guitarist Brian “Head” Welch. It’s immediately clear on opening track “Don’t Prey For Me” that importance has been placed on guitars instead of electronics with it’s crunchy Nu Metal riff. This emphasis placed on guitars continues throughout the album with plenty downtuned guitar riffs on almost every song.

That’s not to say electronics have been completely left out. Ambient electronics are sprinkled throughout the album and just help to add the nice bit of variety. In particular lead single “Never Never” sounds like it would have been at home on The Path Of Totality but still doesn’t feel out of place here. Following this it’s straight back to the old school, Nu Metal style Korn on “Punishment Time”. All of this is held together by Johnathan Davis’ trademark vocals which are still as unique as ever. One of the albums only real misstep comes what is arguably the albums ballad “Lullaby For A Sadist”, which just drags the album down a bit towards the end and just feels out of place considering the more aggressive nature of the album. And despite all it’s throw backs to Nu Metal the album doesn’t really break new ground but I doubt this will be a problem to most fans.

In many ways The Paradigm shift is the album Korn fans have been waiting years for. Head returning really had made a difference to Korn in a good way. Whilst it’s not the best album Korn have ever released it’s still impressive that 11 albums into their career Korn can still release quality albums when so many bands from the 90s have just faded away. If anything The Paradigm Shift does a great job at showing that the Nu Metal revival is happening, whether you want it to or not.