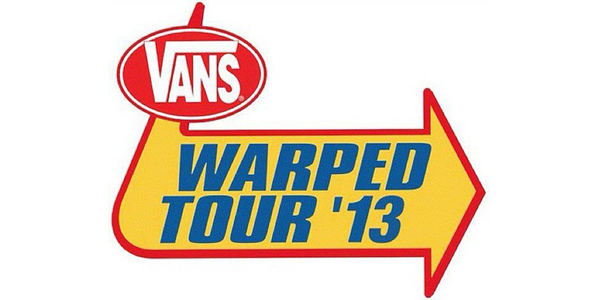 After the success of the Vans Warped Tour returning to the UK in 2012, anticipation was very high for the 2013 instalment. We sent Sam Dignon along to enjoy the ride and here’s his report from day one….

Opening up the Monster Energy Stage at Warped this year Attila (5) begin to get the crowd warmed up with their brainless Deathcore. Whilst a lot of the crowd seem to be loving it the poor sound combined with front-man Chris “Fronz” Fronzaks already hard to understand vocals really hurt Attila’s performance. Still looking at the size of the pits very few seem to care but if it wasn’t for the crowd, Attila would have been completely forgettable today. Crossfaith (9.5) on the other hand were absolutely phenomenal, they have already built up a reputation as being one of the best new live bands around and this afternoon further proves why.  The band are explosive on stage as they fire out tunes from their Zion EP and latest album Apocalyze, it’s almost shocking that a band this good could be playing this early on in the day. There really is no stopping Crossfaith right now, and when “Leviathan” wraps things up Crossfaith leave the stage with an almost impossible act to follow.

Over on the Jagermeister stage Blood Command (6) struggle with poor sound which seriously limits the impact they can make. They play all the best songs from their brilliant album Funeral Beach but the sound issues mean the vocals can hardly be heard. Also on the Jagermeister stage, Lonely The Brave (6) provide a nice change of pace with their melodic rock showing a lot of potential despite playing to a small crowd. Following this The Defiled (7.5) immediately pick the pace back up with the their Gothic Industrial Metal getting most of the crowd bouncing. Despite their Gothic image The Defiled love having fun on stage, especially keyboardist The AVD who spends almost as much time throwing his keyboard around as he does playing.

Back on the Monster Energy Stage, Yellowcard (8) played their first set of the weekend to huge crowd. Filling their 45 minute set with a mixture of old and new songs it’s very noticeable how a large portion of tonights audience aren’t very familiar with the bands recent album Southern Air. Still Yellowcard put a lot of energy in and seem genuinely happy to be playing tonight and even manage to find time for We Are The In Crowds Tay Jardine to join them and provide guest vocals on “Here I Am Alive” before “Ocean Avenue” ends things with one of the biggest sing-alongs of the day. Billy Talent (9.5) know exactly what to do during a 45 minute festival set, they just fill it with all their biggest songs. Every song the band fire out gets an amazing reaction from the huge crowd watching them. It perfectly sums up how many brilliant songs Billy Talent has and shows why they are one of the best modern Punk-Rock bands around.

Changing things up a bit, Parkway Drive (9.5) play the first headline slot on the Monster Energy Stage tonight. The Australian Metalcore titans seem to have toned down the onstage antics for this performance but instead have brought along their biggest stage show ever, steam cannons being used and a snowstorm of confetti used during the amazing “Home Is For The Heartless”. Parkway smash through their hour long set mixing old and new songs with Winston McCalls vocals sounding as brilliant as ever. The crowd are as passionate as the band too, with everyone singing along and moshing to every song. “Swing” see’s easily the biggest circle pit of the day open up and ending on fan favourite Carrion was a perfect way to close a set that felt truly special to the band. Finally it was time for Rise Against (8) to make their long overdue return to the UK and wrap up the first day of Warped Tour. Unfortunately for them sound issues strike once again, with Tim Mcllraths vocals being far too loud and the guitars being too quiet. The band perform with an incredible amount of passion and play a fantastic setlist filled with their biggest songs but the problems with the sound do hurt their performance. Still when they fire out “Ready To Fall”, “Give It All” and “Savior” at the end of their set it’s impossible not to enjoy it. Still it’s a shame their entire set wasn’t this good.

Check back with us on Thursday for part two of Sam’s coverage of the 2013 Vans Warped Tour UK!