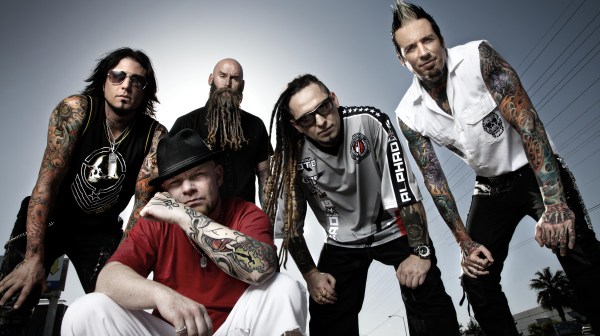 Eagerly awaited by a lot of people ever since they completed their short run of arena shows with Avenged Sevenfold back at the end of 2013, Friday 28th March 2014 sees the start of the first Five Finger Death Punch UK headline tour for several years in Birmingham. With the tour either sold out or virtually sold out on every day, and the smartly dressed Texans Upon A Burning Body also onboard to warm up the crowd prior to 5FDP taking the stage, it promises to be one of THE tours of 2014. Full confirmation of the dates can be found below:

Not content with the UK tour that’s about to start, as well as a series of crushing shows on the touring Australian festival Soundwave 2014 and performing for the troops at the US Air Force base in Okinawa, Five Finger Death Punch have also unveiled their most ambitious video to date. For their cover of House Of The Rising Sun, taken from The Wrong Side Of Heaven & The Righteous Side Of Hell Volume 2, FFDP have filmed a mini epic (an extended version of which will be available soon to experience the full magnitude of the filming) which needs to be seen to be fully appreciated. So without anything further from us, enjoy the video for House Of The Rising Sun below:

Stay tuned for more FFDP updates including reviews from their UK tour next week and any other news as it is announced.