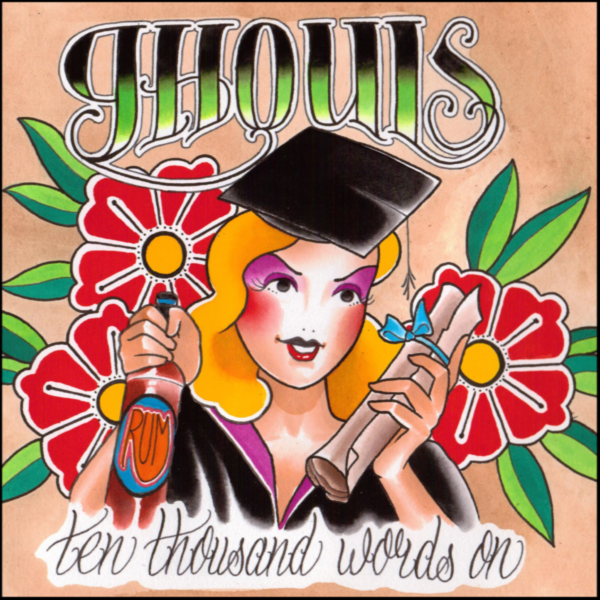 Introducing Ghouls, a six-piece band currently based in London, with members originally from across the UK. Ghouls were founded in late 2011 and describe themselves as Alt/Gypsy/Punk. After the success of their acoustic EP, they are soon to release ‘Ten Thousand Words On’ (available from the 4th of April 2014) which is being produced by James Routh from Sonic Boom Six. Ghouls are making big moves for 2014 by already booking loads of gigs and festivals, such as Takedown, Hit The Deck and The Secret Garden Party. They are also holding a FREE album Launch party on the 4th of April 2014 at The Monarch in London (the poster for which is at the bottom of the review).

‘Letters’ provides a slam-dunk intro to the album. In just 36 seconds they show their passion and zest. The fast paced drums, powerful riffs and the brass section gives them the edge that makes them stick out and provides high expectations for the rest of the album.

In no time at all ‘Live’ then takes it up a notch, starting off with mainly guitar, bass and drums until the vocals scream down the microphone resulting in a full band explosion. The song will not only get listeners moving but will leave them randomly chanting “Does anybody wanna get out of here?” and “Life’s made for living my darling.”, lyrically introducing the listeners to the band’s relationships with women, Saturday nights and alcohol.

‘Live’ leads perfectly into the enjoyable song ‘Devil’s Water’, inspired by having too much to drink and still wanting to continue. With lyrics like “Devil’s water’s calling you.” and “You got yourself in such a mess, woke up and said you’d never do it again.” – It’s one for the party animal in all of us. This is a predicament that many will relate to and is a great party tune.

They defiantly provide fire in their belly but they also have a sensitive side and ‘A Note Of Advice’ is a perfect example, Involving people crumbling and being haunted by the past. “It’s alright not to be alright” is one line of some really good advice in the song. Even with such a difficult topic it’s still a surprisingly danceable song.

‘Oceans’ softens the record a little more introducing a female vocalist into the mix accompanied by a fantastic brass break later on in the song. ‘The Beautiful Game’ picks it back up and tells of the darker side of finding love, with the stand-out influences of Blues, Ska and Punk all merged into one. This song packs a huge impression, similar to ‘Hollow Victories’ and the groovy, catchy and punchy ‘Night Creatures’.

‘Dive In’ continues to amaze; the hook is addictive, the energy displayed in this song is brilliant and the lyrics really stand out, especially “Life’s like a swimming pool, the further you swim out the deeper it gets.“ and “It’s easier to learn to drown than swim.”. The atmosphere alone in the recording of these songs makes it evident that they will put on a great show live.

Although I believe they have lost a little flavour comparing to previous recordings of ‘Quit While You’re Ahead’, this is still a strong track and is an inspirational anthem with great vocals, acoustic guitar, brass, and lyrics fans will want to shout out when they see them live. ‘London’s Burning’ blasts back into their last song of the album, keeping things high paced, saving the best for last. The calm section in the song makes people want to softly skank until the build up gets the listener slowly rowdy and wanting to go nuts for the final explosion of the album.

For a début album this is more than impressive, packed with brilliant metaphors, catchy choruses and intense moments and will be extremely difficult to follow. All Ghouls need is the right publicity and they have the potential to be GREAT.

Stand out tracks: ‘London’s Burning’, ‘Dive In’, ‘Quit While You’re Ahead’ and ‘Live’
For fans of: Imperial Leisure, Faintest Idea, Larry And His Flask, Riskee And The Ridicule

Once again here’s a reminder for Ghouls’ album launch show at The Monarch in Camden on the 4th of April 2014: 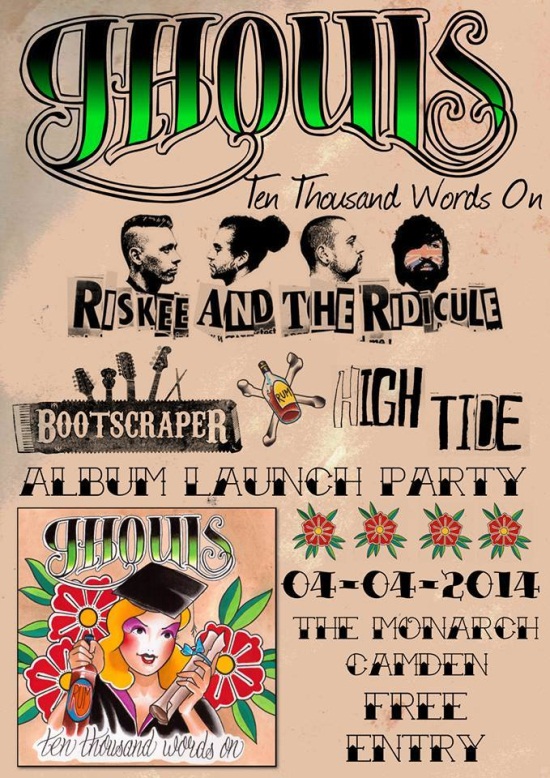