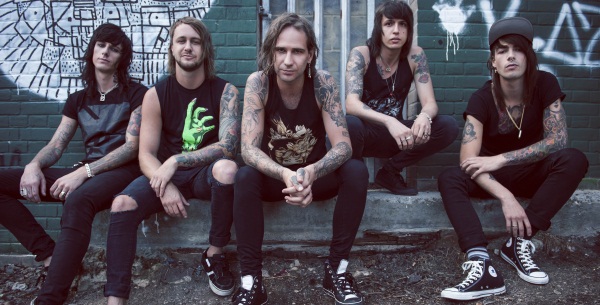 The Howling are one of the most original rock bands to come along in the UK scene in a very long time. Oozing punk attitude and rock and roll vibes from their music, Rock Sins first saw them opening for Rise To Remain at The Portland Arms in Cambridge in September 2011. Fast forward two and a half years and the band are gearing up for the release of their first official single in May with the album to follow. Our Lisa caught up with Rev and Blacky from The Howling backstage at Takedown Festival 2014 in Southampton to find out when they’ll be unleashing their music upon us all, as well as various other things….

Hi, this is Lisa Fox for Rock Sins and I’m with The Howling.

I’m very well. How are you guys doing?

How was the set?

REV:  It was great. I loved it. I really liked it; I like the smaller shows and the ambience. I really enjoyed it man, to be honest with you.

REV:  It’s always good when they don’t know your songs and they’re still getting into them. I love that it’s an initial impact and it shows how strong the set is.

REV:  That’s because we’re not. We’re keeping it to ourselves quite a lot but there’s a bit of a strategy with the release and we’ve got the first single dropping on May 18th, a song called “Possessed” which will be available online. And then there will be like another single and then there will be an album. It’s a bit of plan being put together now, so we’ve purposely held back the material.

And is that just to build up the hype or is it to make sure the release happens properly when you’re ready?

REV:  Yeah to do it properly really. We’ve got videos online and other tracks.

BLACKY:             There is music out there available if you look for it. We’ve given two free downloads away in the last couple of shows.

REV:  Yeah, we’re just trying to keep it off till we’re ready. People come to the live shows to hear it.

I think you guys are very much a live band.

If it rains, you’ll be absolutely laughing.

REV:  Well SikTh have reformed and they’re going to be headlining the stage. We’re main support to those guys and it’s good because the guitarist Dan Weller produced some of the tracks on the album, including the one that we’re doing as a free download. So it’s going to be really good, it’s going to be a good vibe backstage and we’re excited to see those boys and there’s a real good billing for this years festival.

So what have you guys got going on at the minute, apart from planning the album release?

BLACKY:             We’re shooting a video at the moment for the single; we’re about to start it next week and the week after. We’ve started writing the album for album two, just to keep it fresh for ourselves.

REV:  We’re just about to head off on tour with Feed the Rhino and Zoax in May.

Is that a UK tour?

BLACKY:             Yeah, we’re doing regional universities. It’s all available on our Facebook, all the dates.

It’s not me. [Laughter] What does it say?

You haven’t done the ironing!.

REV:  You’re never home anymore and when you are, you’re pissed.

It actually almost sounds like a relationship you know.

Is it getting serious?

REV:  I take him out to museums and stuff like that.

So you’re going for all the romantic, highbrow stuff.

REV:  It confuses me to be honest, but I take him out to museums, sightseeing.

Holding hands and skipping through meadows?

So what would you guys say is the mission of The Howling? As I mentioned it before, I think you’re very much a live band. Is the aim to be the next Motely Crue? The next Rolling Stones?

BLACKY:             At the start of the band, when me and Rev had a conversation, we saw a huge gap in the market for what we’re doing, no one is really modernising rock and having great songs and great lyrics and great voices so we set about doing it. We knew we had the talent in the band to do that and it’s worked out that way to be honest.

REV:  I feel really proud of the album.

BLACKY:             Yeah, I think we’re more from a street level really. We’ve got a serious work ethic as a band and we bring that across in what we do live and just taking control of every opportunity we’re given really. I don’t think we compare ourselves to any of those kind of like cliché bands from the past. That’s what we’re really trying not to be anything like, because that’s just been done time and time again. We’re trying to bring something fresh, we’re trying to twist things around, we’re trying to bring new, modern elements into the sound, but still maintain the fact that we make rock and roll music, different music.

Do you think there’s that many places for rock and roll music to go now?

BLACKY:             Every so often you get a scene that emerges and a lot of bands start to sound very very similar, doing the same sort of things and it takes one band to come along and do something that is way and interesting and completely different and music has definitely got places go still and there are still things you can be doing with it. I guess that’s what we’re trying to do really. We’re just trying to do something new, different and combining lots of different genres and interests that we have within the band.

And do you love the music you make, are you in love with that.

REV:  But there would be no other reason to do it, we’d go and watch bands like Prodigy, Chase and Status and the same time we were going to watch Aerosmith, Black Sabbath at the same time we’d watch like up and coming bands, watch punk bands. And we love it, we go to festivals and we love it all, it’s all like a good song.

BLACKY:             Our eyes are well open to what’s going on around us as well, you know there is a lot of fashion music, bands coming through, we’re pretty switched on, so we know what’s happening out there and we know where we want to go with it.

It’s quite interesting because I interviewed a band not that long ago and the lead singer was like “Of course it’s a job. I do it to make money and if I didn’t make money, then I wouldn’t do it.”

REV:  Yeah, it’s not really about money for me really. We’ve been in bands and tried to take everything that we love and put it into one band finally. As I say, we saw a gap in the market and no one was doing it anyway and we wanted to do it for ourselves and prove to ourselves that we could create a new genre and that’s what keeps us going.

I think that’s a good philosophy, definitely, I like that. You’re very quiet both of you, not what I was expecting, I was like, “I’m going to interview The Howling and they’re going to be jumping up and down on the table and like hanging off the lights, (although they’re a bit high in here).

REV:  We’ll wait until you switch the recorder off and then we’ll rip your face off.

[Laughter] Finally, I’ll end on one message about The Howling, what would your final message be for the fans out there? People who haven’t heard you yet.

REV:  It’s happening, it’s coming now, the album is going to be dropping this year, come and see it! There are some brand new sounds so come and see it on Facebook.

I’ve got a feeling that you guys are going to be massive this time next year, so thank you for taking the time to chat.

The Howling’s first single Possessed will be released on the 18th of May 2014. They’ll also be hitting the road in may as discussed with UK hardcore favourites Feed The Rhino as well as Zoax. You can keep up with the band in the meantime on Twitter at @TheHowlingmusic. 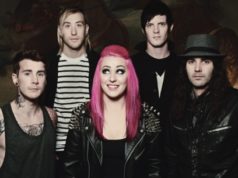 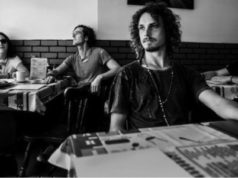