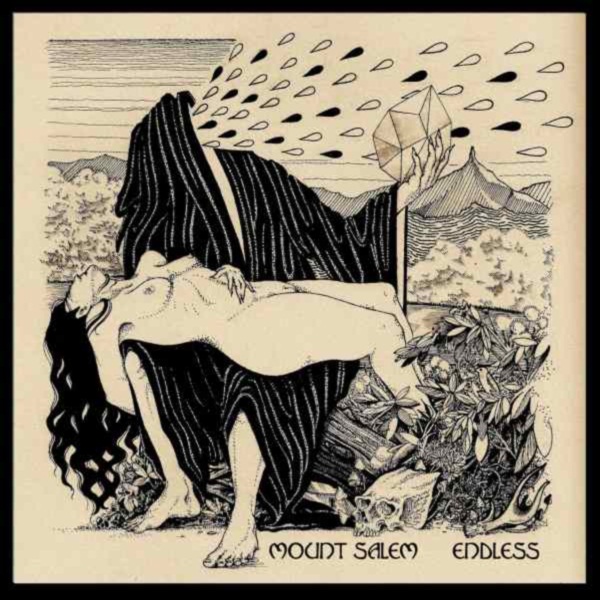 Having been signed by Metal Blade Records, Chicago’s Mount Salem are about to release an extended version of their 2013 E.P. The band only formed in 2012, yet album Endless is very mature. Bringing together a mix of torture driven souls, metal riffs and chilly elegant gothic glamour. With haunting melodies, angst infused lyrics and echoing guitar, this is the perfect mix of doom metal. Drawing inspiration from fathers of prog, Black Sabbath, and its easy to hear the bands influence in Mount Salem’s music.

Opening track ‘Good Times’ expertly combines a catchy grunge bass riff with the soft feminine vocals of Emily Kopplin. Combined with a subtle organ sound that is reminiscent of classic John Lord, this is a beast of a song. ‘Lucid’ brings yet more thumping bass lines and vibrato guitars, and sounds like a modern take on the classic prog sound of the 1970’s. ‘Full Moon’ continues the retro feel with slow, blues vocals and soaring guitar before becoming faster and heavier; a metallic element in a kingdom of doom. ‘The Tower’ is a classic slice of crushing doom. Kopplin’s skills with an organ are demonstrated on ‘Mescaline’, before she extends her vocal range with some banshie style wailing on ‘Mescaline II’. Closing the album is ‘The End’, which has all of the feel of a late night jamming session between The Doors, Jefferson Airplane, and of course, Black Sabbath.

All this contributes to a feeling of fragility and angst which is an undertone of the album, almost like the personification of something beautiful and pure being tortured till it decides to fight back. Its easy to be cynical about female fronted prog bands, and Mount Salem were a band we were unsure about at first.  One thing quickly banished that worry, and that was simply the strength of the performances on the album. Mount Salem prove themselves capable of bringing together amazing riffs, graveyard atmospherics, strong feminine vocals and some game changing bass lines.

Vintage rock, paying tribute to the giants of prog past has been done many times before, but doing it well is pretty rare, which is what makes Endless a pleasure to listen to.