The festival announcement pendulum has swung back in the direction of the Download Festival 2014 as Andy Copping and his team have confirmed another dozen and a half (that’s eighteen in layman’s terms) bands to appear across the weekend this coming June.

Top of the pile this time around are UK rock favourites The Wildhearts, appearing for the first time since 2008. Their guitarist CJ had this to say on their return to Donington in 2014:

Well they just can’t get rid of us. It’s only 20 years since we first played Donington and in 2008 they turned the power off on us. Who knows what will happen this year…Bring it on!

There’s plenty more homegrown talent of all sorts on display as stoner / doom favourites Orange Goblin will be bringing their trademark grooves to Download 2014 alongside Midlands thrash veterans Lawnmower Deth. Returning to Download alongside them will be their Midland neighbours Page 44, Brighton rock outfit Royal Blood and two of the bands of the moment in the shape of The Dirty Youth and Marmozets. Then there’s also Bristol ska / hip-hop fusion act The Magnus Puto, their fellow Bristolians rock n roll collective Tax The Heat, Cumbrian rockers Colt 45, hardcore punk outfit Drones and a pair of acts from across the Irish sea in the shape of No Hot Ashes and Kid Karate.

From across the pond, the legendary stoner rock stylings of Monster Magnet will finally be making their Download Festival return having not played since 2004, while their compatriots Chevelle will be appearing for the first time, having had to cancel their only previously planned appearance at the first Download in 2003. Legendary punk veterans Against Me! will also be appearing at Donington for the first time in their near twenty years as a band.

Also making their Donington bow will be the Japanese rock duo of Vamps (JPN), joining their compatriots Crossfaith and Coldrain on the Download 2014 stages. Finally, continuing the resurgence in power metal at Donington alongside Sabaton this year will be Italians Arthemis, who’s resident axeman Andy Martongelli is rather excited about playing Download 2014:

Arthemis at Download Festival 2014! Hell yeah! Do we need to say more? There’s nothing better than playing in front of the massive Download crowd. Last year we had a blast and it’s such a true honour for us to be back! We’ll deliver a very special, face-melting-show for this event so make sure you’re there to share the awesome moment with us: Arthemis strikes back!

These eighteen bands join headliners Avenged Sevenfold, Linkin Park and Aerosmith plus several dozen other bands (who you can see on the new Download line up poster below) on the 2014 edition of the festival. Day tickets have been confirmed to go on sale this coming Friday (28th March 2014) priced at £75 plus the usual fees and can be obtained from the official Download Festival website www.downloadfestival.co.uk as well as Ticketmaster, Live Nation and the other usual online outlets. Further updates on Download 2014 will follow when we receive them. In the meantime if you haven’t read it check out the interview we did with Download promoter Andy Copping back at the start of February. 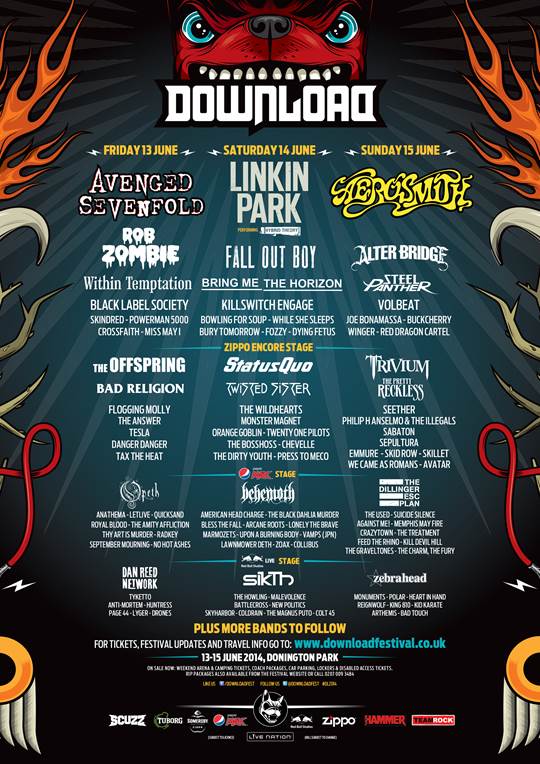