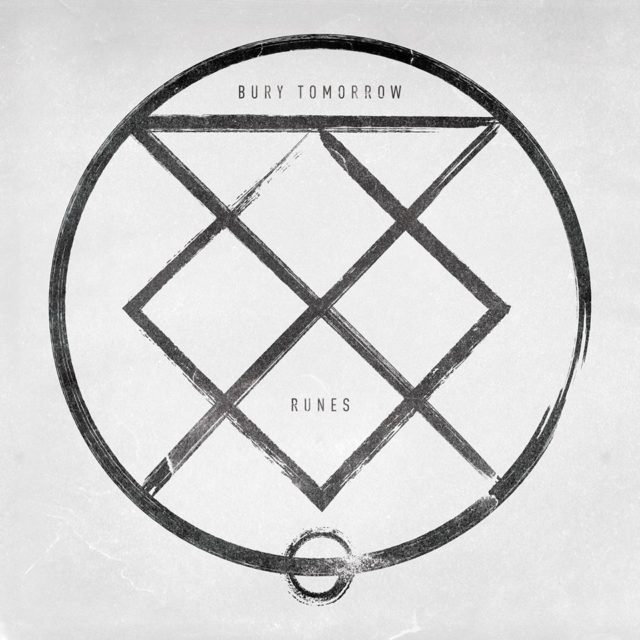 Bury Tomorrow cemented themselves firmly in the UK metal scene back in 2012 with the release of their breakthrough album, The Union Of Crowns. Now – two years later – they’re back with their latest effort, Runes.

Early single Man On Fire kicks things off with a blast. In the months since its release, it has swiftly become a fan favourite and despite having heard it many times by now it still packs a weighty punch. Vocalist Dani Winter Bates reaches almost Amon Amarth levels of brutality in his growls at points. Riffs are a dime a dozen in this tune, from the distorted opening to the intricate guitar works towards the end. This is just one of the many great songs featured on Runes with Garden Of Thorns being another particularly heavy highlight. As a whole, Runes is a more old school metalcore album than their previous releases, bearing a heavy Killswitch Engage influence. The influence of new guitarist Kristan Dawson is felt throughout; Runes is the most melodic offering from Bury Tomorrow so far, partly due to Dawson’s riffs and solos.

The only problem is that none of these songs, although enjoyable, feel challenging, new or exciting. Indeed, album closer The Last Of The Ice almost feels like a parody of metalcore itself. A Maiden-esque riff is played over a boring beatdown, and before long Dani Winter Bates is spiting his most conventional lyrics thus far. Telling the listener not to “let them pull you down” and “just be you” It’s the weakest, most conventional song on the album and a poor choice to end on.

Runes’ biggest flaw is also its greatest virtue; as a collection of metalcore bangers, it’s pretty damn fine. As a cohesive album however, each song feels far too similar to the last, making repeat listens a trek. Nearly every song on Runes has the same structure: Either a beatdown or an acapella vocal will open the song, before leading to a venomous, screamed verse which gives way to a melodic, clean chorus. Each song features at least one breakdown, with the exception of the short acoustic track Divine Breath. There’s nothing here to justify listening to Runes over Killswitch Engage’s The End Of Heartbreak, Bullet For My Valentine’s The Poison or even Bury Tomorrow’s previous effort, which contained some outstanding tunes.

Runes isn’t a bad album; indeed, the songs themselves are all decent enough, and if you’re already a fan of the band it’s definitely worth a listen. Unfortunately, there are no mega choruses and no beatdowns that make you want to punch lions in the face, certainly not in the vein of The Union Of Crowns. Put simply, there’s just no Knight Life on this album. In a world where Architects just released the superb Lost Forever // Lost Together, why would you spend your time on this generic effort?