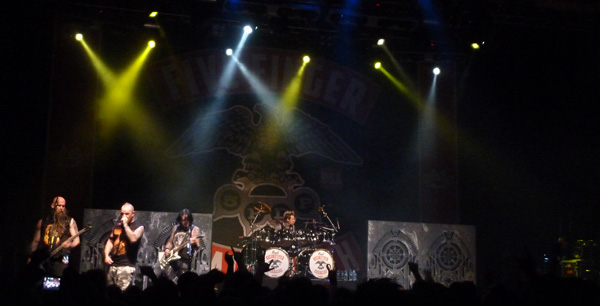 Currently in the news for a bit of a controversy stateside involving their singer Ivan Moody trying to get a nine year old girl to sing the lyrics to “Burn MF” on stage, the second in our series of classic Download Festival video performances this year features Five Finger Death Punch. Their performance last year of “Under & Over It” was the start of a performance that made an awful lot of people sit up and take notice of the band in a new way and was part of a stellar 2013 for Five Finger Death Punch (although we’ve got to say, you could hear the bass drum a lot better when you were there in the flesh at Donington). Without anything more from us, you can enjoy Under & Over It from The Download Festival 2013 right here:

Whilst there is no FFDP at Download 2014, there are over 100 very impressive bands performing across five stages including the likes of Rival Sons, Anathema, Powerman 5000, Crossfaith, Bowling For Soup, Fozzy, Status Quo, The Offspring, Opeth, Steel Panther, Trivium, Bring Me The Horizon, Killswitch Engage, While She Sleeps, Bury Tomorrow, Volbeat, Joe Bonamassa, Alter Bridge, Rob Zombie, Fall Out Boy and headliners Avenged Sevenfold, Linkin Park and Aerosmith. Tickets for Download 2014 are still available via www.downloadfestival.co.uk as well as Ticketmaster and various other online ticketing websites. Rock Sins will have extensive Download coverage in the coming weeks including previews as well as classic Download performance videos and interviews with some of the bands battling it out to play Download 2014 in the annual Red Bull Studios Live At Download contest – so keep checking back regularly!