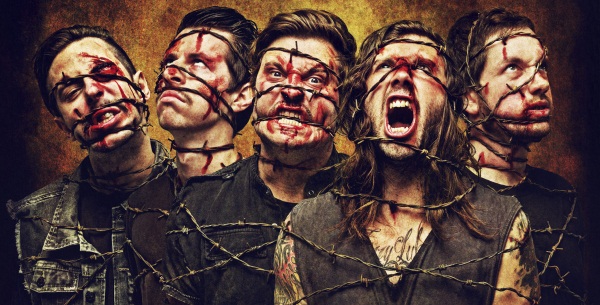 Australian Metalcore crew Buried In Verona are currently on tour with Born Of Osiris and Rock Sins had the chance to chat with them before the show in Manchester. We caught up with guitarist Richie Newman and bassist Sean Gynn to discuss touring the UK, their new album “Faceless” and how good Australian Metalcore is right now.

So you’re a few shows into the UK tour with Born Of Osiris, how has it been so far?

Richie: It’s been awesome the Born Of Osiris guys are all really cool. All the bands like After The Burial and Betraying the Martyrs have been super cool. The tour itself has been going great, they’re pulling big crowds here in the UK and Europe and we’re just fortunate enough to be opening the tour for everybody and we’re having a great time partying a lot too and seeing a lot of stuff too so it’s really good.

Sean: I mean obviously it’s gonna be a little bit different for us coming over here but in the UK in particular for some reason we tend to do really well  which is awesome. Wales and Scotland don’t quite know who we are yet but judging off the one Southampton show so far so many people knew us which was awesome.

You’ve been to the UK a few times now, do UK crowds differ much to Australian crowds?

Richie: I think so, my theory is Australian people only have 200 years of culture and music and I think people in the UK and Europe live and breathe music a lot more than some Australian people do, I’m not doubting my own country I’m just saying because of the background and history there. So that’s always a bonus for bands coming over here because everyone lives and breathes music.

Speaking of Australian music you have got a very strong metalcore scene, how do you guys feel being part of this scene?

Sean: Dude it’s the biggest, like I mean heavy music in Australia is the biggest form. I mean above all else, it’s above pop music above rock it’s above everything else. Like when you’ve got bands like Parkway, Amity, Northlane and In Hearts Wake more recently have all cracked the top 5 on our Arya charts that’s huge.

Richie: I mean that’s our equivilant to the billboards

Sean: You’re up against all the same bands everyone else is

Richie: And we’ve been up there too, I mean we’ve charted top 10 and top 20 on every album so it’s incredible

You recently released your fourth album “Faceless”, are you pleased with how it’s been received?

Richie: Erm yeah, Faceless was like we knew it was gonna be a different record from the start compared to the last record Notorious but that’s what we do. We do game changers for ourselves and we change shit up all the time and people who like Notorious and Saturday Night Sever also like this new record as it’s a combination of both.

Sean: I think we tried to find a middle ground, we like to switch it up for ourselves. I mean we’re never super happy with anything we do like we always wish that we’d done something better so that carries across to the new album. We wanna make it faster, make it heavier, we need tomake this chorus better or  make something catchier so we’re always trying to progress in that sense.

Was there a particular message or theme you wanted this album to have?

Richie: Well erm individually I guess we all have our own personalities of kinda theme that we want to have but Brett being our vocalist he has a message and he focuses on the dark side instead of the good side, if that makes any sense. Like he’s kinda the Sith Lord from Star Wars. And we do live in a world that’s not that great and he’s trying to flourish and make known to kids that there is a dark side too. And that there is a negative aspect that people have to embrace, it’s not all roses.

Listening to it I felt there was more of a Nu Metal feel to some of the songs on the album, were you influenced by any Nu Metal bands this time?

Sean: Definitely, we definitely took that approach, without a doubt

Richie: I mean cos of our age and cos we’ve all grown up listening to Nu Metal. I mean my whole heavy life I’ve listened to Nu Metal so I thought why would you not put something of your youth back into I mean I love Nu Metal and I love heavy stuff like Grindcore and I love pop, I love anything so if can through it all together and make something cool out of it then why not?

What else would you say are your biggest influences as a band?

Richie: Well we’re not a political band, we don’t really voice our opinions politically or anything like that. Me personally when I’m writing something it’s just how you feel. If you feel shitty you’re just gonna write darker stuff, if you’re happy which I usually am it’s kinda like an uplifting vibe or a happy vibe. So yeah that’s what I’m influenced by, that’s just my story.

Do you have much else planned for the rest of the year?

Sean: Exactly, we did a lot of overseas stuff and we should have been doing stuff more stuff there so we’re gonna enjoy another couple of runs this year at home. I mean we have numerous other overseas tours but we’re just trying to stay as busy as we can.

Richie: We’ve got Australia, New Zealand, The USA and Europe and UK again to do.

Sean: We’ll be busy for the rest of the year

Finally, do you think any of you could knock out a horse with one punch?

Sean: Aha I reckon you could knock a horse out.

Richie: I reckon I could come close but when I was a kid…

Sean: I actually punched a horse in the head!

Richie: No when I was a kid my uncles used to have horses and stables and stuff like that. And I know how powerful they are and their skull and bones are really really thick. So in theory if you hit them as hard as you could you’d probably break a bone before you’d crack any of their bones, like they have an inch thick cranium. I dunno it depends if it was a running punch and a full on “someone just killed my mother, I’m gonna kill this horse” then maybe I could knock it out.

Sean: “This horse just kicked my mum in the face or the neck”.

Richie: Yeah, maybe you could knock it out depending on how angry you got.

Sean: I dunno dude I’ve seen you punch some shit before like that little punching bag thing.

Richie: Yeah I use my fists a lot.

Aha cheers that’s all then guys.

Buried In Verona’s UK tour with Born Of Osiris wraps up tonight (Friday 16th of May 2014) in Leeds. Further updates from the Buried In Verona camp will be available here when we have news to report. Follow the band on Twitter at @buriedinverona. 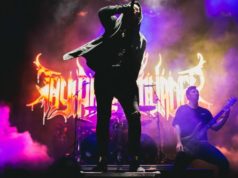 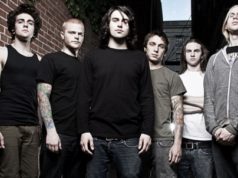