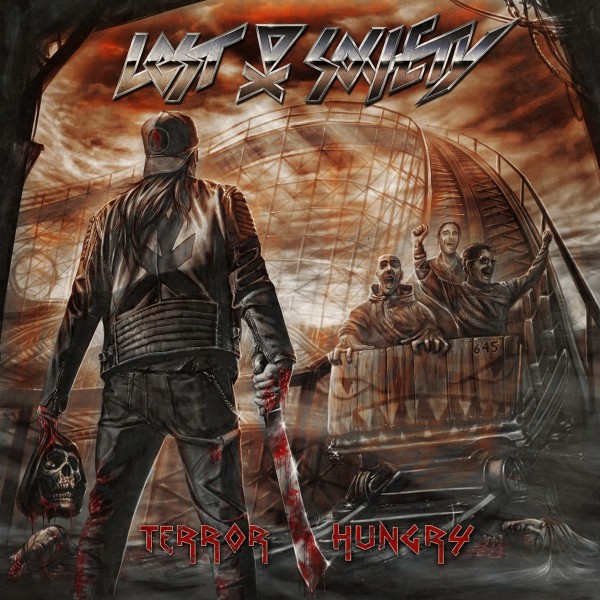 Unlike no other, Lost Society have thrown a spanner in the works with their second studio album Terror Hungry encasing playfulness and an unending amount of energy. From start to finish this thrash metal quartet seem intent on emulating the 80’s Thrash sound and whilst it may seem meaningless to many, there are plentiful fans who want to re-live what was one of the heydays of metal. Grab a beer, bang your head to the face contorting riffs that are Lost Society.

Opening track ‘Spurgatory’ lays down their position with the sound of a can opening (most likely to a nice cold beer) followed by a bellowing yell. A short track nonetheless, with a repetitive yet menacing riff plays the song out to the end. It seems if the whole album if stuffed full of riffs like this, we’re in for a treat.

Rapidly we’re introduced to a funky bass line in second track ‘Game Over’ and yet again familiarised with a typical thrash guitar attitude, where Samy Elbanna gives us a first proper taste of his vocals with a passionate scream. His raw vocals sit unlimited amongst simple yet accomplished fast riffs, readily available to bang your head to. Simple yet catchy, “Game Over” is repeatedly yelled and although it might give you a bit of a headache, it’ll sneak into the realms of your brain.

Terror Hungry marks the second studio album for ‘Lost Society’ and already you can hear that they’ve put in a lot of hard work. Every track possesses a solid direction with funky riffs and brain wrecking solos and not forgetting that 80’s style screaming which makes you wanna grab a bottle of JD and gargle that shit for breakfast.

Title track Terror Hungry instantly leads us into madness, accompanied by drumming that resembles the speed of light, quickly followed by “Fuck!” The ‘fuck’ really congeals the sense of how much they don’t give one. Dominating the whole track, and much like every other track on the album is typical Thrash metal riffs. Don’t get me wrong they are so awesome that you’ll even lose a few brain cells but even then it becomes so brain numbing it’s tempting to shut the computer and throw it out of the window. It’s not all bad though (promise).

‘Mosh It Up.’ That’s a fucking order, specifically from Lost Society. As this track drops you’ll feel obligated to give yourself whiplash to this devil driven music. It’s the fastest, bone crushing, incendiary track of this solid album and as you’re screaming “mosh it up” in your room with Samy Elbanna you’ll have found the sound track to your almost miserable life.

Turn it up and bang your head. You’ll have no problems with getting into this album as it encompasses everything you could need in a Trash Metal album. Raw riffs, fiery solos, harsh vocals, silly lyrics and much more. Buy this album and travel back to the 80s for dirty Thrash Metal at it’s finest.