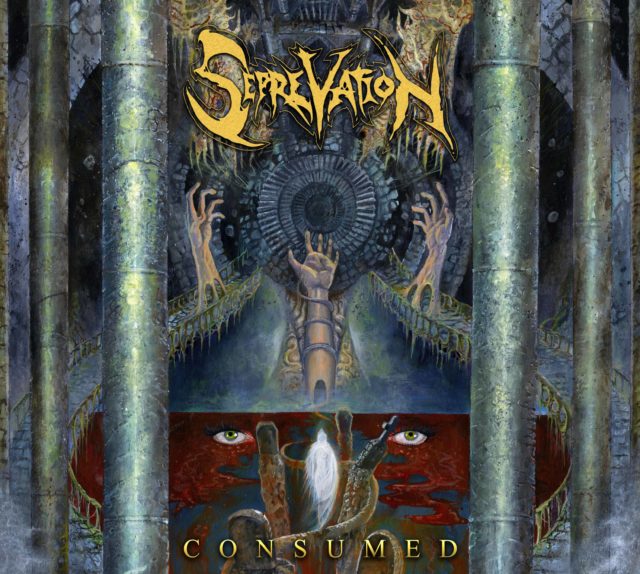 Bristol thrash metal band Seprevation have, for a while, been one to “keep an eye on.” Their debut album Consumed shifts them firmly from aforementioned category into essential listening to those keeping a close eye on the more visceral end of Britain’s expansive music scene. Showcasing Seprevation’s competent moulding of death metal disorientation and the ferocious speed of thrash; ‘Consumed,’ is a powerful statement of intent.

It’s not hard to pick out Consumed’s primary influences but the music never feels contrived or forced. Seprevation moulds all of these influences into a cohesive, exciting package. Much like Kreator before them Seprevation take the more extreme end of thrash metal, maintaining its blisteringly vital crunch. Each brief pause in the attack is perfectly timed to pack more of a punch when its resumption inevitably hammers home straight between your eyes. Opener “Divine Devastation” may take a lot from “Pleasure to Kill” era Kreator but it moulds this seamlessly with a fantastic Morbid Angel-lite mid-section. The slight whiff of death metal comes largely through the bass playing which rarely allows itself to be pulled along fully with the guitar line creating disorientating soundscapes in the rare mid-paced sections.

Consumed is a hard record to pick out individual tracks from. Certainly this is a negative in that it shows there are not any tracks head and shoulders above the rest forming the peaks and troughs of every truly great album but a sense of journey is still maintained by the occasional more esoteric section. Take, for example, closing track “Between Two Worlds” which features a NWOBHM-inspired galloping mid-section, or the disorientating bass flourishes of “In Torment They Burn”. Consumed’s blasts still maintain their bite because of these more interesting sections.

Well worth a listen by any thrash fan who wants something a bit more on the extreme end of the spectrum. ‘Consumed’ is certainly one of the better albums released in that world this year.

Seprevation’s Consumed is released on the 10th of May 2014. Pick the album up directly from the band at https://www.seprevation.bigcartel.com/.