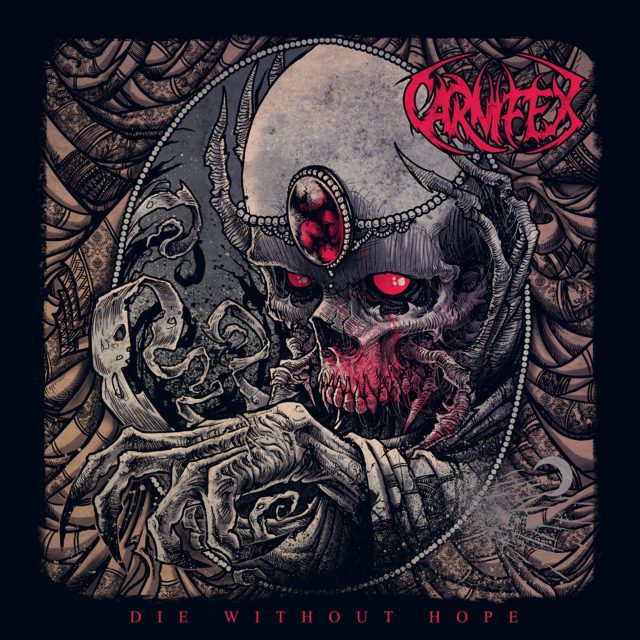 In the three years since deathcore veterans Carnifex released their last album, Until I Feel Nothing, their scene has floundered somewhat. It’s certainly no longer the juggernaut it was in the mid-2000s. But, on their first album back from a short hiatus, Carnifex are bigger, better and bolder than ever.

Having something of an orchestral presence isn’t exactly a rarity in this genre, but on Die Without Hope, Carnifex arguably do it better than anyone. The interplay of piano and strings with slabs of deathcore creates a sinister, almost black metal-esque tone that sits just underneath the surface of the album throughout. The second track “Dark Days” mixes a haunting piano melody with some of the heaviest metal Carnifex have ever written, creating one of the stand out tracks not only on the album, but of 2014 so far.

As with every Carnifex release, vocalist Scott Lewis is one of the best aspects of Die Without Hope. His vocals are among the best in the genre, with a great range from high fry screams to gnarly gutturals. Another of Lewis’ talents sits at the forefront of this release: the lyrics and their delivery really stand out. Carnifex have managed to achieve that rare quality that we shall call ‘The Lamb of God Factor’ that is; huge, anthemic choruses without a single clean vocal in sight.

These choruses are backed up by immense guitar work from both Corey Arford and Jordan Lockrey, with plenty of excellent riffs throughout. That isn’t surprising. What is surprising, however, is just how good the solos are on Die Without Hope. Lead guitar has long been the bane of deathcore but on many of the songs here Lockrey’s guitar work is a huge highlight. The melodic pauses featured in a few tracks further expand both guitarists horizons. Everything is held together well by drummer Shawn Cameron who keeps up a consistently impressive beat throughout, with some tricky drum fills bringing a real sense of flair to the proceedings beyond the deathcore standard.

With each new album Carnifex grow more experimental, whilst sticking to the deathcore template they have grown so good at. Die Without Hope perfects that formula, and is by far the bands best album yet.

Die Without Hope is out now on Nuclear Blast Records.