With the first two parts of our Download preview under our belts (you can check out Part One of our preview for Friday here and also Part Two for Saturday of the festival here if you’ve missed them), our attention now turns to the final day. For Download 2014 the Sunday has once again adopted the approach of Classic Rock Sunday after a year off from this last year, and who better to kick off the last part of our Download preview than the day’s rather famous headliners….

Last in the UK four years ago when they also closed the Download Festival (their first trip to Donington in two decades), Boston’s favourite sons are back to headline Download for the Second time. On the top of a day that is very much Classic Rock Sunday (at least on the main stage), everything is set up perfectly for Aerosmith to provide one hell of an end to the festival. They’ve even released a new album since they were last here, the rather enjoyable Music From Another Dimension which will likely get a decent airings. But as far as bands who headline Download being loaded with classic songs, Aerosmith are up there with the biggest and best. Hearing thousands of people belt out Dream On, Love In An Elevator and I Don’t Wanna Miss A Thing will be a special experience. Let’s hope the Sun Shines for Messrs. Tyler, Perry and friends. They would advise you to Walk This Way, and we’d advise you to go and see them. Unless of course you’re planning on seeing our next highlighted band…

A slightly strange experience for Trivium at Download 2014. Originally scheduled to headline the Red Bull tent by the band’s own request as they wanted to replicate the set they played in 2005 on the stage they were originally going to play prior to being bumped up to open the main stage, the swell of public demand and worries over health and safety saw Trivium promoted to second stage headliners for the final day of 2014’s Donington festivities. Then drummer Nick Augusto left the band and frontman Matt Heafy blew his voice out at a festival in the US, so the original plan to play their 2005 set plus a few extras has had to be dropped for a combination of the reasons above. So long as Matt’s voice has recovered sufficiently whatever they happen to play it should be a great performance and a very good alternative for those who consider Aerosmith not their thing. If you like both bands it’s a hard choice.

Arguably the performance of the day could come from US hard rock four piece Alter Bridge. With two near sold out UK arena tours under their belts and most recent album Fortress hitting number six in the UK album charts Myles, Mark, Scott and Brian have seen their increased profile rewarded with a sub-headline slot on the main stage at Download for the first time. The current leaders of the 00’s hard rock / rock n roll pack of bands which includes the likes of their friends Black Stone Cherry and Volbeat to name but two, Alter Bridge could just be one or two steps away from taking a headline slot here in the future (don’t take our word for it, see what Andy Copping, Download promoter, had to say on the matter).

Lots of banter, a fair few girls showing their boobs and maybe a special guest or two, it’s all in a standard festival appearance for Steel Panther. With their third album All You Can Eat now available and a recent sold out UK tour (their biggest one yet), things have never been bigger or better for Steel Panther in the UK. A band who’ve traditionally done very well at Download, we’d be surprised if things go any differently this time around. Ladies beware, The Panther are coming.

Swedish power metal favourites Sabaton make their long awaited Download festival début this year. After previous appearances at Knebworth and Bloodstock it’s not Donington’s turn to hear glorious tales of war and battle and victory delivered in the power metal style that only Sabaton can manage. With new album Heroes recently released and an always entertaining live show, Sabaton’s appearance at Download 2014 is most welcome. They might have a hard time coming on The Zippo Encore stage after our next band though….

Sepultura don’t really need an introduction do they? The Brazilian metal legends may not be quite the force they were in some people’s eyes compared to their 90’s heyday when they were led by the Cavalera brothers but with Derrick Green and Andreas Kisser plus original member Paulo Xisto Pinto, Jr on bass they are still a fierce live outfit. Their most recent album, last year’s The Mediator Between Head and Hands Must Be the Heart has been hailed as their best work this millennium and possibly even since Chaos A.D. so that’s a giant statement of intent that Sepultura are back to their best and not going anywhere anytime soon. Mosh pits guaranteed. Having not played at Donington in many years we would advise they are not to be missed.

Let’s face it, Phil Anselmo is one of THE true legendary metal frontmen. Be it from his work with Pantera, Down or even the epically named Superjoint Ritual, Phil is one of the most watchable singers going. This time around he returns to Download with his solo project, Philip H Anselmo & The Illegals. With their début album Walk Through Exits Only released last year receiving comparisons with arguably the heaviest of all the Pantera albums, The Great Southern Trendkill, this is Mr Anselmo at his heaviest. Top of the triple header on the Zippo Encore stage also involving Sabaton and Sepultura, all three will likely provide a couple of hours of hugely enjoyable heavy metal. Plus we wouldn’t put it past Phil to have an interesting tale or two to tell into the bargain.

They lay waste to any venue or festival they play at and are currently renown as one of the UK’s tightest and most fearsome live outfits, we can only be talking about Feed The Rhino. Their singer Lee Tobin inspires an almost religious fervour and devotion in their hardcore fans and extracts the maximum audience participation out of every single show. Even non-hardcore fans can be drawn in by the sheer force of their performances. If you want more evidence check out James’ review of their recent hometown show at the Folkestone Quarterhouse.

Always great entertainment and fun live, US ska-punk rockers Zebrahead are regular visitors to the UK and will provide a fine conclusion to the music in the Red Bull Studios Tent on Sunday night. Having played Slam Dunk as well as a huge tour with Less Than Jake and Reel Big Fish earlier in the year, not to mention countless other tours (including with Bowling For Soup) in recent times, Zebrahead have built up a solid not to mention rowdy UK fanbase. Seeing them in the somewhat cozy confines of the Red Bull Tent has the potential to be one of the sets of the day. A band who could easily play a much higher slot on the festival and slay it, they’re a great alternative to the other Sunday night headliners.

Our wildcard of the day goes to Taylor Momsen’s group The Pretty Reckless. Having originally been taken for something of a vanity project for the former Gossip Girl actress, their second album Going To Hell has silenced many of the doubters. With songs like the title track and the ridiculously catchy Heaven Knows, TPR are becoming an established rock band in their own right, not just because of their singer’s previous TV roles. Momsen also has the X-Factor as a frontwoman because you never quite know what she’s going to do next, although there’s a reasonable chance of nudity being involved (see The Pretty Reckless’ only previous trip to Donington three years ago where the only thing covering her boobs was a bit of tape). The Pretty Reckless are on the verge of becoming huge, a great Download performance will only push them closer to the top.

Honourable mentions: Volbeat’s rapid rise to rock and roll stardom continues apace and they’ll be a great watch on the main stage prior to Steel Panther, Alter Bridge and Aerosmith. The Dillinger Escape Plan’s brand of math metal has always gone down a storm in the UK and Download 2014 is likely to be no different as they headline The Pepsi Max Tent. Suicide Silence’s first UK festival appearance with new singer Eddie Hermida is likely to be quite the event, particularly as it’s inside The Pepsi Max Tent while over in the Red Bull Tent UK hardcore upstarts Polar have the potential to flatten the stage for good with the known ferocity of their live performances.

And that concludes our Download Festival previews for another year! Stay tuned to Rock Sins for enormous amounts of Download Festival coverage including live tweeting and other social media updates as well as in-depth day-by-day coverage and loads of interviews with the bands playing across the weekend. 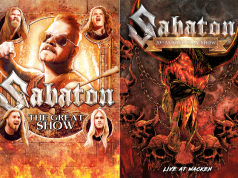