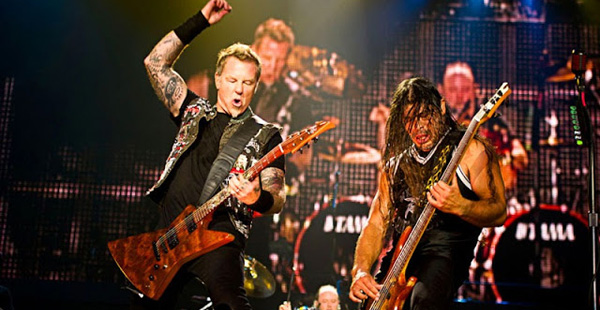 In his first article for Rock Sins in some time, Nick Holmes rose from his sick bed with one thing on his mind; Metallica. He braved the braying hordes of hipsters and puddles of mud (sic) to witness metal finally hitting Glastonbury in the flesh….

When Metallica were announced as the big Saturday night headliner for this year’s Glastonbury Festival it caused quite a stir. Some groaned the band aren’t in keeping with the “spirit” of the event and others moaned about James Hetfield’s hobby of killing animals. Two immediate thoughts sprung to mind. Firstly these are no longer the days of Alcohol-ica type spirits and roars of “Fuck you, muthafuckers!” at the audience. Since the infamous “Some Kind of Monster” era ‘Papa Het’ has become something of a hippy himself, all be it one that still hunts four-legged beasties on occasion. It should be added he has the correct licenses and what he does, while unsavoury to many, is perfectly legal.

That leads to the second thought, namely the ridiculous hypocrisy of the “ban them ’cause the singer kills things” brigade. Glastonbury Festival is held on a working dairy farm. When dairy cows have been thoroughly milked they are put in a lorry and carted off to become burgers. The Eavis family, who own and run farm and festival, allowed fox hunting on their land when it was legal and they also support badger culling to attempt combatting the spread of tuberculosis in cattle. So logically, on a pure animal rights level, then Glastonbury Festival should be banned completely, right? What total bollocks. A large majority of the whiners almost certainly wear leather or other animal-derived clothing and without doubt most are not vegetarian or vegan. Total hypocrites throwing rocks in their glass houses.

A funny and incredibly cheeky T-shirt was revealed as a two-fingered gesture to the naysayers, with the back print featuring insults from Glastonbury favourites including Pulp’s Jarvis Cocker, Alex Turner of Arctic Monkeys and Scottish post-rockers Mogwai. This is surely a must-have Metalli-collectible! 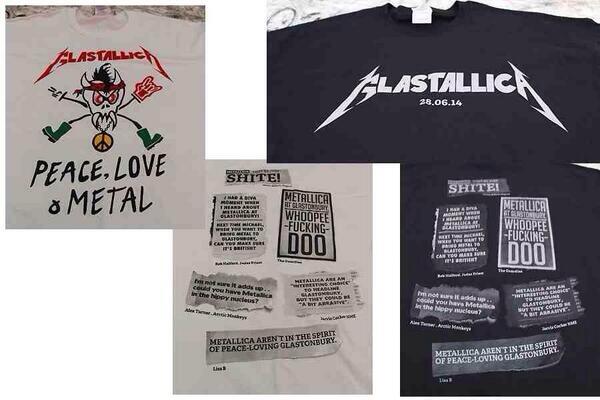 Anyway enough of that and on with the show. The music should do the talking. Was it any good and was it worth it?

Metallica are hardened veterans of headlining festivals and filling stadiums around the world for over two decades now. This was obviously not a normal gig and even experienced types would be forgiven a few nerves. They need not have worried. The field in front of the main Pyramid stage was rammed right to the back where punters meet campsite. It was more than just fleeting curiosity too as most stayed the course. An added bonus was while the ground was boggy after earlier storms the rain managed to hold off.

Before the riffing began there was a surprising and very provocative film. The traditional intro of “The Good, The Bad and the Ugly” had been modified to show as a tribute to actor Eli Wallach, who recently died. Then the mood turned to tongue-in-cheek Metalli-farce. No spoilers! Take a look at the band’s antics with “Great Rock N’ Roll Swindle” director Julien Temple!

There was no gentle start up as regular opening favourite of many years “Creeping Death” immediately gave the audience both barrels. The band had brought some friends, presumably a special MetClub fan group outing, and the stage behind Lars Ulrich’s drum kit was very, very crowded! Hetfield and co. ripped through a short (by their standards) and sweet set free of solo spot wankery and with much reverence and praise to the hosts. There were brief intermissions for unrestrained hippy-dom too as the frontman called for unity and togetherness and stuff. He also made what was almost certainly a barbed quip at Iron Maiden singer Bruce Dickinson, who has been scathing about Glastonbury Festival and Metallica’s decision to play it. Would Steve Harris say “Yes!” to Michael Eavis though?

Though many of the audience may have been unfamiliar with the back catalogue they made a good attempt at joining in with choruses and “Woah” chants. Ever the genial conductor Hetfield led them by the hand with the biggest sing-a-longs being biggest UK hit “Enter Sandman” and the finale, a pumped up cover of “Whiskey In The Jar” and early classic “Seek and Destroy”, as giant black Metalli-balls were thrown across the crowd.

The verdict? Judging by the reaction of band it was mission accomplished. All four bade fond farewell, with Lars making an unusually concise speech and he genuinely seemed quite overwhelmed by what had just happened. Metallica had defied expectations and some initially hostility to score a considerable victory for heavy music. Some metal heads might argue the band have lost touch with their core audience and are less relevant than they were, but it’s possible after this Glastonbury Festival and the Eavis family will be more open to inviting such acts. That can only be a good thing as ghetto-ising and pigeonholing is unnecessary and self-defeating.

When I first saw Metallica at Milton Keynes Bowl just over 20 years ago I would never have imagined seeing them play at, let alone headline, Glastonbury Festival. It’s taken a very long time and the event’s founder has said not very nice things about metal and its fans over the years. With all that in mind last night was a good moment for metal…and for certain people’s bank balances! 😉

Metallica will headline the final day of Sonisphere at Knebworth Park on Sunday 6th July with their special “By Request” set voted on by Sonisphere ticket holders. More information and tickets available at https://sonisphere.co.uk/.

Thanks to Metallica.com for the photo of the band at the top of the article.