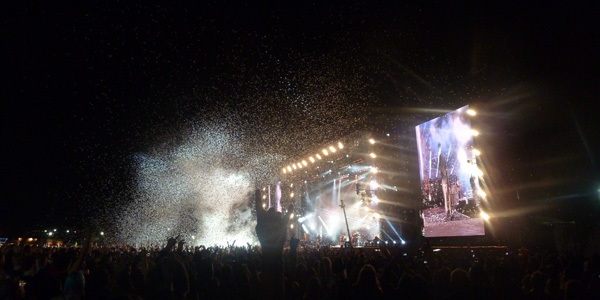 Once again, after several days of fantastic rock, metal and partying, it comes down to the final day of the Download Festival. 2014’s edition had been highly enjoyable so far, and with a number of fantastic bands playing the final day it was hoped things would finish in style. Once again Rock Sins’ team members had very different experiences on the day so our review is brought to you from two different perspectives. If you’ve missed out on our coverage of the first two days of the event, you can catch up on the following links:

Now it’s over to Jamie for his coverage from the final day of Download 2014. Keep an eye out for Sam’s report which will be online tomorrow….

Due to various media commitments, Rock Sins missed out on a number of artists early in the day on Download’s final day of music, though the long wait for live music was ended in some style. The modern day Sepultura may be derided in some quarters these days but none of these people can have seen Sepultura live recently. In the flesh they remain as imposing and impressive as ever, with Derrick Green commanding the stage with aplomb. New material from their most recent album The Mediator’ such as Manipulation of Tragedy translates very well, backing up the opinion that it is one of Sepultura’s finest records for many a year. 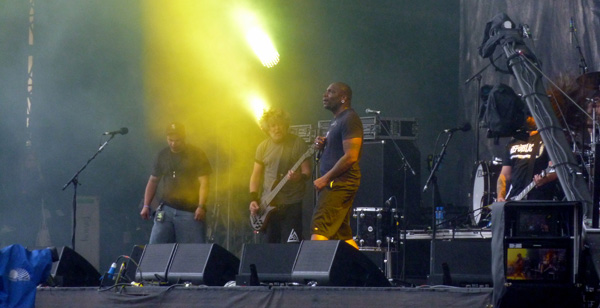 That notwithstanding the loudest reactions are reserved for the classics, and Ratamahatta goes down a storm before Derrick informs the assembled masses that there is “time for one more music” (one of the quotes of the weekend) before correcting himself and then launching into the obligatory Roots Bloody Roots. A fantastic conclusion to a short, sweet and impressive performance, Sepultura remain throughly impressive in a live setting (7.5).

Following Sepultura, Rock Sins headed back over to the main Stephen Sutton stage for the first visit of the day in time for Danish rock n’ rollers Volbeat. Their most recent album Outlaw Gentlemen & Shady Ladies has propelled them to new heights and it wasn’t hard to see why with material like Dead But Rising and Lola Montez going down a storm with an impressively large crowd. 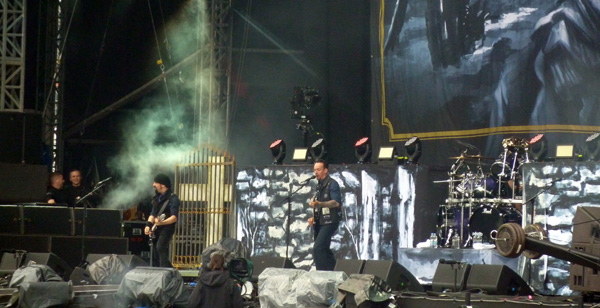 Former Anthrax axe man Rob Caggiano has added another dimension to Volbeat’s live sound and performance energetically roaming the stage and he acts as a good foil for frontman Michael Poulsen. With old favourites like Fallen and Still Counting sounding as great as ever an hour with Volbeat passed by all too quickly and Download 2014 is likely to be seen as yet another success for Denmark’s best rock and roll export (7).

Steel Panther had an unexpected obstacle to overcome at this years’ Download as the camera operators had seemingly been instructed to show no boobs on the screen, much to the dismay of Michael Starr and Satchel that every time they were trying to get boobs on the screen, the camera would pan to Lexi Foxx! Lack of boobs aside the chosen material from Steel Panther’s new album All You Can Eat such as Pussywhipped and If I Was The King went down very well, and the sight of tens of thousands of people singing along to Gloryhole is a memory that won’t fade anytime soon. 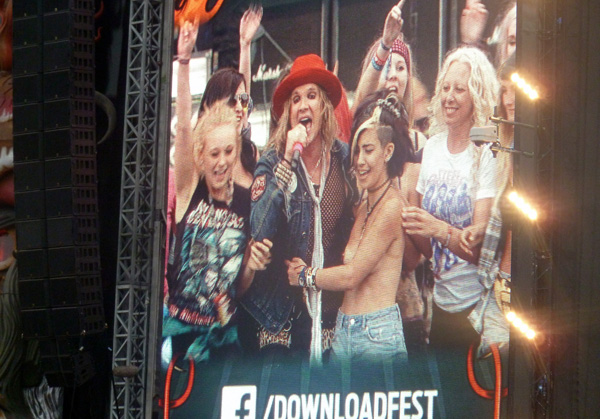 Despite the banter being of familiar nature Steel Panther were no less entertaining and the last half hour of the set was full of audience participation as the crowd threatened to outdo Michael Starr on both Girl From Oklahoma and Community Property before 17 Girls In A Row provided Steel Panther with an opportunity to get one over the Download producers by inviting (yes, you guessed it) 17 girls on stage to get down with The Panther with boobs on show aplenty. The camera director wisely accepted defeat at this point, leaving Steel Panther to rip through a corking rendition of Death To All But Metal to close the performance on a high (7.5).

With their biggest Download slot thus far Alter Bridge had their opportunity to back up Rock Sins assertions that they are future headliners of this festival & they got things off to a storming start with lead single from Fortress Addicted To Pain, though the impact of the song was slightly lessened by some dodgy sound in the beginning. With old favourites like Come To Life and a very popular Ghost Of Days Gone By mixed in with new songs like the epic Cry For Achilles and Waters Rising (with an excellent vocal performance from Mark Tremonti) Alter Bridge fans old and new were being kept very happy. 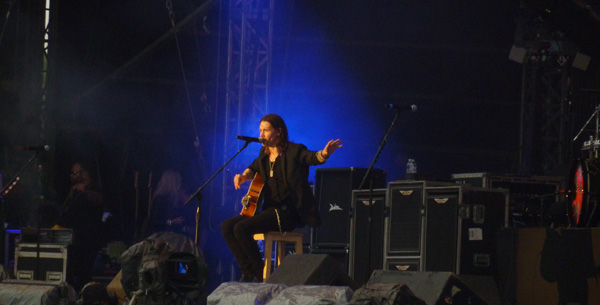 For the more casual listeners the intro to Metalingus brought a huge cheer of recognition from those who knew the song via it’s WWE connections as Edge’s long time entrance music before a magnificent rendition of the emotional one-two punch of Blackbird and an acoustic Watch Over You took things up several levels. All that was left to finish things off with the traditional closer Rise Today, which Myles promptly fucked up, getting hugely lost in the second verse which meant things finished off on a slightly less high note than they could have done but it was still a great showing. On this evidence, Rock Sins’ opinion that they will one day headline this festival stands (8).

With an almost brand new drummer and a frontman on his way back from blowing his voice out a month ago Trivium seemed like facing an uphill struggle to turn in the kind of performance those who’ve seen them live know they are capable of. The beginning of their set was engineered in such a fashion to clearly protect Matt Heafy’s voice but that made it no less enjoyable with a rip roaring Brave This Storm kicking things off before the likes of Strife and Black had enormous circle pits whirring almost in time with the CO2 cannons going off on stage. 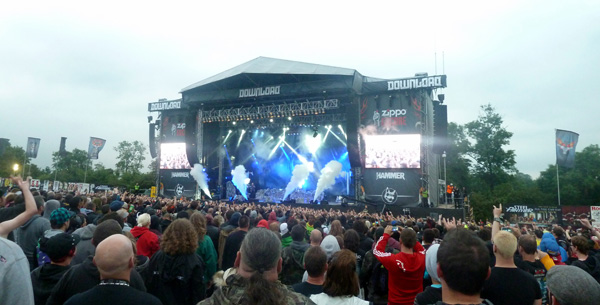 Fire in the hole!

When the time did come for the masses to hear the trademark Heafy growls with A Gunshot To The Head Of Trepidation Matt performed admirably, assisted more than ably by Corey Beaulieu as he was throughout the whole set. Both Corey and bassist Paolo contributed far more than usual on the vocal front and it worked well, particularly on huge crowd favourite Like Light To The Flies. With huge singalongs for the likes of Anthem We Are The Fire and Dying In Your Arms Trivium had the crowd in the path of their hands and the fact that almost no-one was leaving to catch the start of Aerosmith who had just begun on the main stage was testament to how well they were performing. 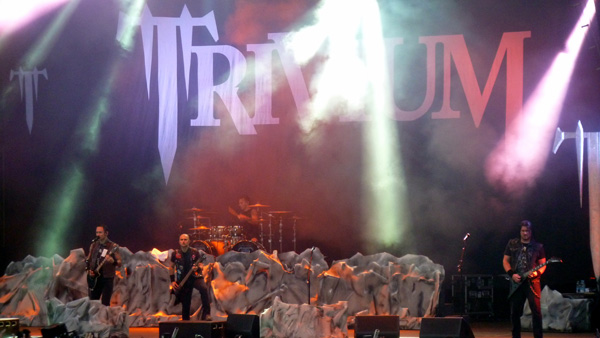 With the obligatory Pull Harder On The Strings Of Your Martyr unleashed on Donington with Matt holding nothing back on his voice the circle pits grew ever larger, and even larger still with Down From The Sky which concluded the main portion of the set. Trivium are a band who don’t usually do encores, but then it’s not everyday you headline a stage at one of Europe’s biggest festivals so they indulged themselves (and those watching) with the full Capsizing The Sea intro leading into one of the most heartfelt, loudest renditions of In Waves that has ever taken place. Matt thanked everyone once again for everything the UK has done for Trivium, acknowledging what a special place it is for them and it was a fantastic end to a performance that has gone brilliantly with the odds stacked against them (9).

There may not have been many who left Trivium early but with their performance over there was a mass sprint by several thousand people back to the Stephen Sutton stage to catch the good portion of Aerosmith’s set that was still to take place. Arriving during an excellent rendition of Same Old Song & Dance set the tone for what left to come (and as told after, mirrored much of what had already taken place).

Seeing 60,000 – 70,000 people singing along to Aerosmith’s worldwide mega hit I Don’t Wanna Miss A Thing is a sight that everyone should witness in the flesh at least once, as it was simply spine tingling with Steve Tyler on incredible form. Few bands can cover The Beatles in a deserving manner but Aerosmith’s rendition of Come Together, particularly in a live setting such as Donington has more bite and power than the original and more than does it justice. Going from Come Together to Dude Looks Like A Lady and then Walk This Way just intensified the party atmosphere – quite frankly if anyone in attendance wasn’t enjoying this then they don’t know how to have fun as it was a joy to behold one of rock’s greatest ever bands still at the very top of their game. 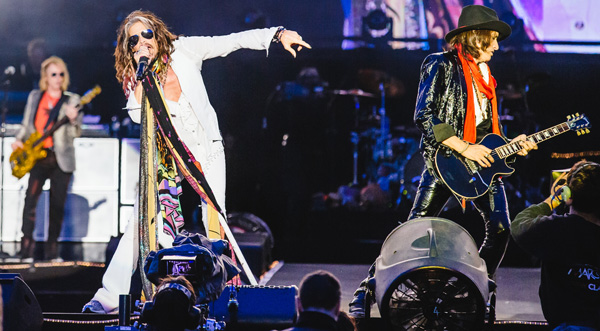 Aerosmith doing what they do best. Photo by Andrew Whitton.

The encore was magic. Steve Tyler playing Dream On on a piano on the runway in the middle of the crowd with Joe Perry solo’ing atop the piano while the entire field of Donington Park belted out the chorus will live long in the memory. Sweet Emotion’s trademark bass riff then permeated across Download marking the beginning of another massive sing-and-dance-along to seemingly bring things to a magnificient conclusion, but after milking the crowd for a few minutes Mr Tyler declared “Fuck curfew, we’ll play one more song”. Said song was Aerosmith’s original hit Mama Kin, and Download 2014 was closed in a spectacular display of blues rock and confetti.

Seeing a band like Aerosmith who’ve been doing what they do for forty years and still being able to do it to such a high level was an amazing sight. Their level of performance even eclipsed their excellent showing at Donington four years earlier – though perhaps the fact it hadn’t been raining all day this time around had some bearing on that. Nevertheless, just as with Rammstein twelve months earlier, it was the perfect way to close the festival (9).

And with that Download, aside from some last night partying and packing up, was done for another year. What was regarded by some as perhaps one of the weaker Download Festival line-up’s on paper turned out to be one of the most enjoyable in the event’s twelve year history. Special nod must go to the organisers for making it definitely the most well run Download Rock Sins has had the pleasure of attending – with everything from the toilets to the food to the media set up being far better run than in previous years. We’ll leave you with Jamie’s top 5 bands each from the weekend, and here’s to Download 2015!