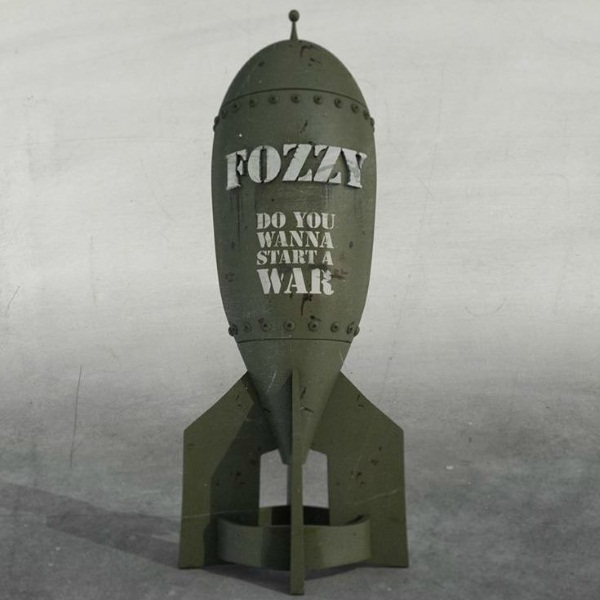 In 2014, Fozzy are well on the way to becoming the “huge rock stars” they always professed to be back in the early days of the band (complete with fabricated backstory and frontman Chris Jericho’s alter ego Mongoose McQueen). Their last two albums, Chasing The Grail and in particular Sin & Bones have solidified their reputation as a genuine, entertaining hard rock band capable of writing great songs, and one that has eradicated all accusations of the band being a vanity project for Jericho. Now with their sixth album Do You Wanna Start A War being released next week, can Rich, Chris, Billy, Paul and Frank keep up their momentum?

Do You Wanna Start A War starts in promising fashion with the album’s title track. A typically groove laden main riff, effective use of gang vocals and a catchy chorus mean that once this song enters your head, it’s not leaving any time soon. The album’s first single, Lights Go Out, is very different to a typical Fozzy song in that it uses an electro style dance beat but is still extremely headbang worthy courtesy of the heavy riffs that accompany it. It’s a gamble that pays off extremely well as the contrasting sounds mesh very well and it’s huge chorus means it’s a song that goes down a storm live (or, as Chris Jericho himself would tell you, in a rock club).

There are numerous other enjoyable moments throughout the album; Brides Of Fire feels like a natural successor to Sin & Bones’ Blood Happens with Rich Ward turning the growls on alongside some great drumming from Frank Fontsere and a galloping main riff while Tonight is an enjoyable track with nods to old school rock & roll. Something Fozzy experimented with on Sin & Bones was the use of a female backing singing on “She’s My Addiction” and they’ve taken things a step further here. “Unstoppable”, featuring the considerable vocal talents of Christie Cook, is something of a three way duet as Christie takes it in turns alongside Chris and Rich. Unstoppable has mainstream radio hit written all over it with its vocal hooks, inspirational chorus and yet more great guitar work from Rich and Billy Grey – it’s arguably the finest track on the album. Anyone who’s feeling down should listen to Unstoppable and they should hopefully feel a lot better about things.

Last but definitely not least, Fozzy’s fun party going side surfaces once again with quite possibly their greatest cover to date, a metalled up romp through no less than ABBA’s SOS. It is virtually impossible to listen to this without a big smile on your face. Overall, Do You Wanna Start A War is another fine effort from Fozzy. It doesn’t quite have the consistency of Sin & Bones throughout but contains several songs that deserve to be huge hits and it’s an album that flows very well. Do You Wanna Start A War should see Fozzy continue to climb the proverbial rock & metal ladder several more rungs. Thoroughly entertaining and enjoyable.

Do You Wanna Start A War is released on the 21st and 22nd of July (Europe / North America respectively) on Century Media Records. Follow Fozzy on Twitter for up-to-the-minute updates at @FOZZYROCK.