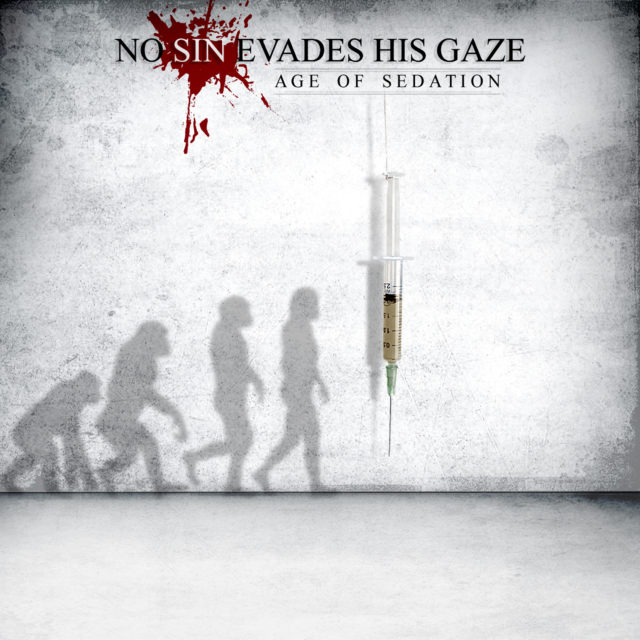 When début single “Age Of Sedation” dropped, No Sin Evades His Gaze began to turn heads. Since then, that single has had over 45,000 YouTube hits and with their first full length – also titled “Age Of Sedation” – the tech metallers are sure to not only turn heads, but blow them.

Following a slightly cheesy opening monologue proclaiming us all to be doomed, a distorted, djenty guitar begins to play, and from the opening seconds it’s positively dripping with groove. Although the bands Lamb Of God influence is quite clear, it’s by no means a straight rip. There’s parts of Meshuggah, Pantera and even a bit of Megadeth thrown in there for good measure, and this blends into a sound that is unmistakably their own. Groovy, technical and aggressive are three buzzwords used when talking about 21st century metal, but they’re all incredibly relevant here.

Each member of the band brings their A Game to every single song on “Age Of Sedation” Vocalist James Denton delivers an apocalyptic snarl that any frontman would be proud of. His range extends from demonic death growls to hardcore shouts and is sometimes tested with some impressively high screeches. Drummer Theo Harvey was only 17 at the time of recording, which is an insane concept in and of itself – his playing ability far outstrips his physical age. “Age Of Sedation” contains tonnes of interesting fills and bruising blastbeats are aplenty. To top off Harvey’s incredible talents, he also provides the clean vocal line – which provides a rare break from the downright brutality that pervades this album. Guitarists Kevin Pearson and Dan Thornton work together with bassist Moat Lowe to create an aggressive, stomping guitar groove. The riffs fly out at breakneck pace, just as you begin to truly appreciate one, another takes its place and hits you over the head all over again

With an average age of 21, No Sin Evades His Gaze are almost unfairly talented, and its exciting to think of how many years worth of intense, vital and breathtaking metal music we can expect from these guys. The album is, without question, the best début release from a metal band in years. It appears as though No Sin Evades His Gaze have landed as a fully formed beast and they are definitely one to watch.  Age Of Sedation will be released independently on bandcamp on August 8th, but with an album as good as this the idea that they won’t be signed by next year at the latest is frankly ludicrous.