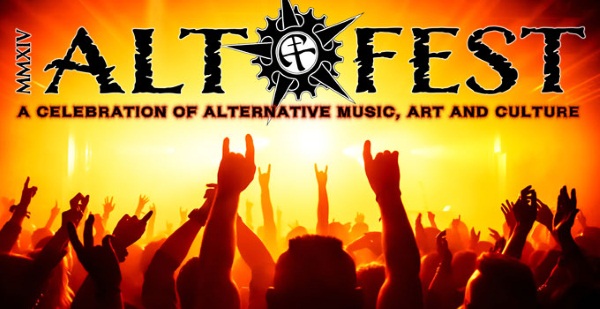 After days (and in some circles weeks) of speculation over the fate of the partially crowd-funded festival Alt Fest 2014, on Friday night the festival’s organisers Dom and Missy posted a very lengthy and detailed statement confirming that the festival IS cancelled as widely speculated. The statement goes into some detail about the efforts that the organisers went to to try and save the event but ultimately it has not been possible to do so.

Rather than us regurgitate the contents of the statement for our readers, you can read the original in full below:

It is with a heavy heart that we must confirm we have had to cancel Alt-Fest. We tried to put on a ground-breaking event for you & the alternative scene, and it was your support that was helping to make it happen. From our early days on Kickstarter through to all of you who have purchased tickets we thank you. We the organisers of Alt-Fest have done everything we can to save it, but this week we ran out of time to raise all the required funds that was needed upfront of the festival.

We also wish to apologise for the delay in releasing a formal statement cancelling the festival. We realise this has severely damaged our personal and professional reputations, we can only sincerely apologise for any additional stress and upset this has caused, we were honestly looking to act in your best interests.

We are very sorry to tell you that we have been advised to not reply to any individual comments or emails regarding the festival and instead make a comprehensive statement. It’s not how we like to do things, it feels wrong to walk off and let your questions, thoughts and opinions go unanswered. So we’ll try to answer them all briefly here.

We were doing very well for a first year festival. We sold over 7.5 thousand weekend tickets, and as you were aware we had a great line up with plenty going on. This however meant we had to pay for over half of all the band’s fees, with the remainder due just before & at the festival itself. Securing bands was not the only cost. The festival was going to cost £1,703,000 in total to put on, including artists, riders, travel, accommodation, production: power, staging, sound, lighting, track way, fencing, water, waste, the venue fee, security, medical assistance, traffic management, health & safety, marketing and much more. We ourselves and all of the Alt-Fest team have put in huge amounts of effort and time over the past two years and done everything within our power to make this work.

If we were to sell a minimum of another 1,000 tickets between now and the festival, we’d have suffered a significant loss that we couldn’t carry. This recently came to light based on a costing error explained below & inevitably down to the fact that the investor unfortunately pulled out last minute. We were expecting to sell more tickets based on our line-up, and if we had sold just 3000 tickets more then we would have been over the breakeven line, or if we could have deferred a percentage of our contractor’s payment, which they sadly were not prepared to do.

We thought our logic was sound and this was also backed by other promoters and people we respect in the music industry in general – Marilyn Manson can easily sell out a 5000 capacity venue, as can The Cult, Arch Enemy or Cradle of Filth. Then there’s the rest of the line-up plus the circus, steampunk, traders and art installations. Perhaps the people who would go to see them at a gig wouldn’t go to a 3 day festival, but they could still have bought day tickets and seen some of the 60-odd bands on that day as well as the headliners, and bring their kids along for free too – we are still trying to understand why we haven’t sold more tickets despite the offering & energy that has gone into it.

We’ve also been contending with a costing error made and ultimately poor advice in the early stages by a company who were supposed to help us work out what the festival would cost to put on. Coupled with the fact that in order for us to compete against the larger festivals then we had to put in very strong offers to be listened to by the agents & hence secure the talent. Additionally during the latter planning stages we were forced to move our main arena, through no fault of our own. This caused many extra costs that further increased the budget upfront of the event.

We have held continuous meetings and tried for months to secure investment & had genuine interest to cover this shortfall from individuals, investment firms and equity funding companies. Whilst there was every likelihood of this happening due to the positive feedback we were receiving, it was this week that our last option had run out. This was mainly because they didn’t understand the festival market or the alternative scene. We even tried, as a last resort to save the festival for you all, going to the corporations that dominate the music and festival industry to offer an ownership over the event to ensure it’s facilitated for our customers, but to no avail. We had exhausted all options but please know that we did everything within our power to make this happen.

We even looked at how we could make it to the festival and then recover this year’s loss from next year’s sales to get back on track. Unfortunately, we can’t manage that either because of the way the festival industry and its operators are prone to work. We would have to pay all the contractors before they even come on site to build the festival – they all want the full fee upfront due to the state of the market. We also had the remainder of band deposits to make up before and at the event. We just could not raise all the money needed upfront to continue, nor offset it against any revenue coming after the event – bar, car parking revenue as examples.

We are so, so deeply sorry, it’s awful to think of all the people who bought a ticket in good faith, who booked travel, some from the other side of the world. We massively appreciate the support you have shown, especially all the people who championed and defended us.

We do want you to know though, that it was never a scam or a con. We tried to do something new and different for you and the alternative scene, which was not easy. We have not gone on any exotic holidays or feathered our own nest, in fact exactly the opposite. We did not embezzle the money, or spend it recklessly, we used it to secure some of those great bands we had in the line-up, who required considerable deposits, and other aspects of the event as previously mentioned. We intended to make it an exciting event that would be enjoyed by every single one of you who supported us, so that we could grow even more in future years. Those of you who know us, we work tirelessly to put on excellent events. We never expected it to turn out this way and tried desperately to stop it from happening. However we could have done with better costing advice at the start and stronger ticket sales in this final period to get us through to the event.

We feel we have let the alternative community down, this saddens us immensely & the process we are about to go through is going to bankrupt us, which as I’m sure you can imagine adds huge strain on us as people & as a family.

It is just simply awful and we can only thank those of you who have shown us kindness and endless support, especially now in our most testing hour.

To claim a refund on your tickets, please look carefully at the following list, and at your email confirmation, to ensure you claim a refund from the correct retailer.

Festival Tickets via Amazon = Amazon Local are contacting their customers direct and processing refunds now.
Festival tickets, Dismembership and addons (car parking etc) purchased through our website via clubtickets.com = by email at [email protected]
Festival Tickets via Festickets = direct with them festicket.com

Now that we have had to cancel the festival we need to take steps to place the Company into Liquidation and we want to express our deepest regrets to the artists and to thank all our staff, suppliers and contractors who worked so hard with us.

Our deepest & sincerest apologies go out to you.
Missy and Dom

This is a very sad development as Alt Fest looked like an interesting addition to the UK rock / metal / alternative festival calendar with some fantastic acts playing across their multiple stages. Anyone who’s concerned about obtaining a refund please follow the instructions in the statement above. If there is anything further to report from the fall out then we will report on it in due course. Interested parties can keep also their eyes on the Alt Fest Facebook page for the latest info – https://www.facebook.com/AlternativeFest.