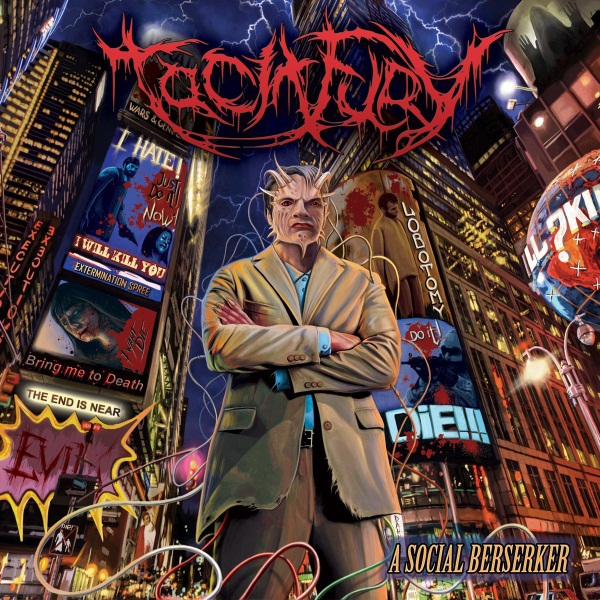 Hailing from the place once known as Stalingrad, Russia, Tacit Fury deliver a brand of death metal not unlike viral stars Dying Fetus (“Why Not Dying Fetus?”), with influences such as Sepultura, Carcass and Metallica adding tight groove to the trio’s sheer extremeness. Their new album, “A Social Berserker”, is a thoroughly enjoyable piece of Russian brutality with foot stomping grooves, top class solos and overall everything you’d want in a modern death metal release.

Straight from opener “Lacerated, Strangled, Impaled”, you know exactly what you’re in for with this album. Vulgar lyrics are part and parcel of death metal nowadays and this more than fulfils this role, which is rather a letdown but not something which will take away from the overall experience of the album. Pinch harmonics are very popular with guitarist/vocalist Enoth, but not to the point where the riffs are disjointed by them, with LSI and “Chronology Bleached” (while perhaps being one of the weaker tracks) being examples of well executed harmonics not taking away from the overall quality of the songs while Enoth growls away at the forefront of the music and imidaZo’s drumming is something to be admired, working perfectly with Enoth and German.

Aside from the rather basic lyrics, the only other real complaint is the band’s refusal to break out of their comfort zone, except for their cover of Metallica’s “Creeping Death” (following Sepultura’s “Territory” as something of a tradition of covers from Tacit Fury). If you grow tired of monotony then this will be a problem for you, but considering this is death metal, it shouldn’t be much of a problem for your standard death metal fan. As long as the grooves are tight, the riffs are heavy, and the solos are great, you’re on to a winner. And Tacit Fury certainly ticks all of those boxes.

In a year which has seen Misery Index earn much deserved acclaim and Dying Fetus appearing at Download Festival, it would not be a surprise to see artists like Tacit Fury breaking out in sooner or later in the death metal scene. One to watch.

Tacit Fury’s new album “A Social Berserker” is out now (self release). You can catch up with Tacit Fury at their official website www.tacitfury.net.