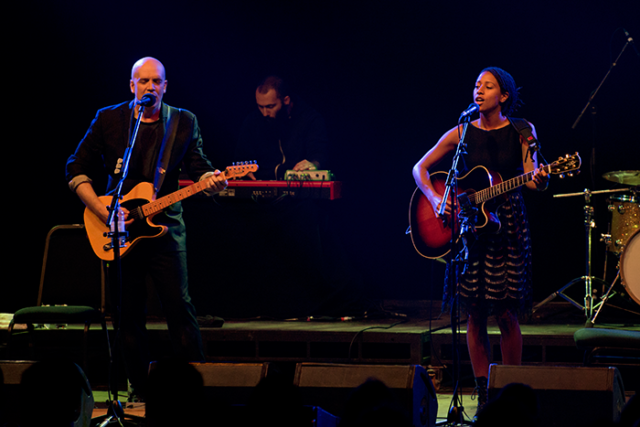 Over his twenty year career Devin Townsend has morphed musically and personally through several versions of himself. Earlier this year he took what was arguably one of the bigger gambles in his time, launching a crowd-funding project to help make a country album. Known for his full-on electric riffage, Devin seemed almost apologetic at first when speaking about the idea. “Some of you guys might hate it”, “Maybe nobody will like it” and similar statements appeared. He need not have worried.

The Pledgemusic campaign went stratospheric, reaching more than 500% of its target in a short few weeks. Casualties of Cool was go. Young folk singer and fellow Canadian Che Aimee Dorval, who had previously guested on The Devin Townsend Project’s “Ki” album, was unveiled as his creative partner and the self-titled album was released in mid-May. The response was phenomenal, with lofty media outlets such as The Guardian and The Independent heaping praise on the songs. Townsend’s regular rock/metal audience also exploded with acclaim across social media.

A while later a trio of live dates were announced, with the first being at Beautiful Days festival in Devon hosted by alternative crusty types The Levellers. It may have seemed a curious choice especially playing the second stage right before the The Levs closed the event. But it actually made a sort of sense. Sold out ages before Casualties of Cool were announced, it provided a relatively neutral audience to test the water. Aside from the odd hardcore fans who either already had a ticket or managed to squeeze in!

Here is the start of the very first live performance by Casualties of Cool, featuring the album’s opener “Daddy” and “The Code”. It’s obvious there are a few nerves but take a listen…

They played for almost exactly an hour and the reaction was great. Those lucky few who witnessed it will most likely treasure the experience as the tent was filled by the swirling sound from a set of superb musicians. Nobody will forget their first hearing of the incredible live voice of Che. After a brief return to Canada to finalise some other record about a coffee-loving alien there would be more from Casualties of Cool.

Fast forward a couple of weeks and an eager throng of people queued at a little patch of serenity among the urban bustle of North London. The Union Chapel has played host to some notable shows before, including DTP back in 2012, and the anticipation was obvious from punters who had their first (hopefully not only!) chance to catch Casualties of Cool live.

An honourable mention must go to Messenger, who warmed up the crowd in style. A very impressive prog-influenced young band which should have a bright future. They were excellent. As Bjork’s “It’s Oh So Quiet” played over the PA, Che nipped out briefly to assess the crowd. Neatly seated in the pews of the old building, the waiting was almost over. Huge cheers greeted Devin, Che and the band as they took the stage. Che then asserted herself, clearly knowing of Devin’s lovable but often infantile banter. He humbly accepted the rule that he was only allowed to say “thank you”, a total of three times throughout the show.

With that boundary laid down they kicked off with rolling rhythms of “Daddy”. That was one “thank you” gone already! Then a squeaky keyboard intro led into “The Code”, which was where Che’s voice really let it rip. As well as soft whispery tones she can switch to sassy mode in the blink of an eye, invoking the spirit of singers such as Ella Fitzgerald and the late Amy Winehouse, who lived and died not far away in Camden. Old structures such as the chapel were built for this kind of thing and the songs came alive in an incredible way. Wonderful as the album is, there are a few moments of arguably fussy over-production. In concert the groove wins. The audience were swinging in their seats.

The mood changed with the double whammy of thoughtful “Mountaintop” and an absolutely heart-rending “Flight”. There were audible sniffs and sobs as the combination of the twinkling melody and Che’s weary lament-style vocal cracked even the toughest of beardy metal dudes. The emotional punch got harder when Devin joined in with his refrain toward the end. Truly magical.

The rest of set was made up mostly of the standard edition of the album plus “Gone Is Gone” from the second disc of the double version. The groovy shuffle of “Ether”, Pink Floyd-isms of “Moon” and ‘Bones”, which has the vibe of Canadian legend Leonard Cohen, were a treat to the ears. It was also lovely to see Devin and Che’s obvious respect for each other. He would graciously step into the shadows to allow all attention to focus on her while she would sit on her haunches when he was on a roll or playing a solo.

The set finished with the Celtic-tinged chant-a-long of “The Bridge”. Once again the hankies were reached for as the phenomenal cinematic sound took hold. Devin’s delivery, firmly backed by Che, wrung the emotions of audience and band one last time. Then he said his third “thank you”. As expected the crowd called for more but that was it. After a slightly awkward bow they disappeared, returning to meet fans soon after.

When one writes reviews it’s not the done thing to be sycophantic and generally critics behave cynically. Even sound-desk managers with perfectionist tendencies can sometimes declare a “great success”. So it was in this case. There are times when, to coin the Lego Movie expression, everything is most certainly awesome.

Now Devin must surely be more than reassured about his quirky little project. In fact he has recently said it’s maybe the thing he’s most proud of in his entire career. If that really is so there must be hope that he, Che and his fantastic ensemble of musicians will keep Casualties of Cool a going concern.

More information, albums and goodies at: