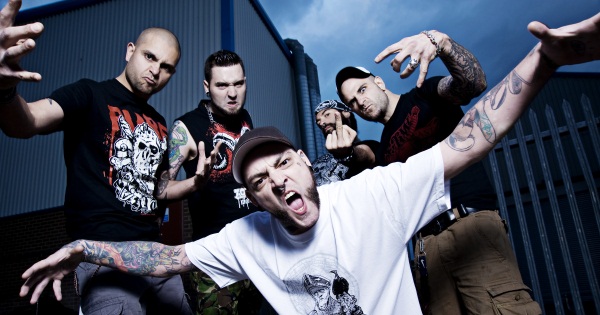 London crossover-metal bruisers Dripback have been tucked away in several bands for years now. Labrat and Ted Maul luminaries now reside in this supergroup that have been playing some crushingly-heavy, critically-acclaimed shows in preparation for their debut album Failed Futures. As one of the most intriguing metal bands to come out of these shores in recent times, we were more than happy to chat to Luca and Lee at Sonisphere.

This is Lisa Fox for Rock Sins and I’m here with DripBack.

Cool.  So how was the show guys?

Luca: Yeah, really good fun.  I’ll say out of all the festivals we’ve done it was probably the smallest attendance, but as we’ve said before, the most important thing for us is that we’re all together having a laugh, do you know what I mean?

Yeah!  Did you enjoy it?

It’s fucking awesome to have Sonisphere back isn’t it?

So you guys released your album earlier in the year?

Luca: Yeah. It’s called Failed Futures, it’s out on 4 Family Records which is our own label because, you know, like not a lot of people know us anyway so we thought, let’s keep it underground and the people that actually know us can enjoy us and we –

Lee: It worked out better that way anyway way man.

Luca: And we can give them good deals.

Lee: It worked out better, you know, we made the money back on the pre-orders so it was a lot simpler, a lot easier, you know what I mean?  No labels –

Luca: Yeah but the people that wanted to hear us heard us didn’t they?

Luca: You know, like – And we may be a small outfit at the moment but, you know, maybe they’ll hear more, maybe they wont, who cares?  How many bands have we heard in the last three or four years that were going in the fucking – Like A Band Called Death for example, 1973, playing hardcore fucking punk music influenced by The Who back in the day and no one even knew they fucking existed.  You know, with a bit of luck when we’re all dead and gone someone will go, ‘Bloody hell, did you hear these wankers from Holloway making, you know, hardcore?’  It might be a cool thing to…

Lee: It was produced by our bro, Russ Russell who does Napalm Death stuff, awesome guy, he’s a real close bro to us man so it was really nice to work with him.

Luca: Yeah man. Biggest director, Gary who did our sound today man, he really helped us out. Actually Gary used to fix all my guitars up for me back in the day.  He’d come in and be like – I’ll bring my guitar in and be like, “Yeah bro, can you fix this up for me?” and he’d look at it and be like disgusted because it’s like covered in blood and fucking shit stickers.  But, you know.

That sums up a lot of DripBack, you guys are one of these really raw, brittle but also sort of post-apocalyptic angry, but angry intelligently, bands.

Luca: Yeah, I mean most of us have got BTECs or GCSEs so! Although for years I did lie to our drummer because we were in the same class at school and I told him that I got a D in music but I actually got an E. What did you get, a D or a C?

So you’re the highest qualified Lee?

Luca: We played Mandatory Suicide by Slayer and Shades of Grey by Biohazard and said it was our own.  But then we gave in our demo and brought the whole band in and played it, we still fucking failed.

Luca: Sorry man.  If I was a corduroy wearing teacher and my fucking students come in and said, “Look, I’ve been playing at the shit holes of fucking North London for free at age 13”, I would have said, you know, “Here’s a line man, don’t tell your parents.”  “Don’t tell them about when I squeezed your arse at parents evening”.

What else do you guys have going on then?  What’s going on for the rest of the year?

Luca: We’ve got two tours in the pipeline that we’re trying to sort out but I don’t want to tempt fate and say, you know, what they are.  In October we’re recording. We did it only on 7 inch and only pre-order and on iTunes, so that’s going to be cool.  I think it’s kind of cool to do stuff that not everyone can get so you’ll only get it if you can order it in time and if you can’t get it, you know.  There’s 16 people at our next show might not know the songs but they might know the songs and if they do you feel cool because you know them.

I don’t think you give yourself enough credit because there is quite a buzz about DripBack.

Luca: I’m sure there is man but like if the banks would give us a little bit more credit maybe we can do more shows.

And equally you guys aren’t in it for the money, you’re in it because you love music.

Lee: Yeah, we love it, yeah.  We love hanging out man and…

Luca: It’s a mixture between the music and the friendship because as you get older you all know, anyone who’s out there who’s into metal, I bet you go to work every day. I bet you come home and see your missus and pay your rent and pay for all your stuff and at the end of the month you’ve got a few quid spare and you pay it to go and see a band you really like. We do the same but we end up playing to gigs that we want to play because to hang out with these boys and fucking have a laugh and play shows – and look how lucky we’ve been.  We’ve played with half our favourite bands.  Fucking Biohazard, fucking all these guys man.  That’s an honour to us.

Luca: Pig Destroyer.  Lock Up, you know, people that we used to look up to when we were kids.  And for us, we’re honoured, you know, to have those guys kip on our sofa and then the next morning go to fucking Belgium or wherever, like that’s blinding. But, as you know, the music tastes have changed these days and not everybody’s in to what we’re playing, but 25 years ago there was a small portion of people that were into it but, you know.  We’re happy.  As long as we get to hang out with each other and have a good time, play some tunes, we’re all good.

To wrap up the interview, because I’m interviewing you guys for Rock Sins and I’m fucking looking forward to asking you guys, you in particular, this question; What is your biggest rock sin?

Luca: My biggest rock sin is probably Alice Cooper’s ‘Poison’ because, I mean like it’s such an awesome tune but at the same time it’s so cheesy and crap that it’s a sin.

You’re going to stick with that one?

Lee: He can just have that one.

Luca: No Lee, tell us your biggest rock sin.

Lee: My biggest rock sin?  You know what?  When I was a kid man I used to love Meatloaf!

That is a sin.

Luca: Even Jesus is pissed off with you right now.

Luca: He let’s you off, but Meatloaf is – You’re going to fucking hell for that.

You can follow Dripback on Twitter at @Dripback and on Facebook at https://www.facebook.com/Dripback. Dripback will also be appearing at The Underworld in Camden Town, London, this coming Saturday (20th September 2014) as part of Wrongstock 2014 along with Oaf, Evil Scarecrow and many other bands who’ve all worked with the legendary Russ Russell. Tickets are still available on the following link – https://www.theunderworldcamden.co.uk/gigs/events/20-sep-14-wrongstock-the-underworld/. 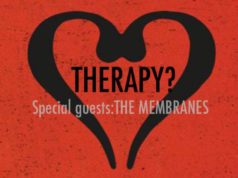 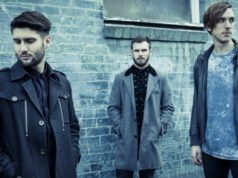 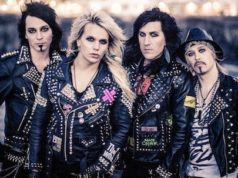 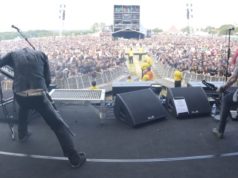 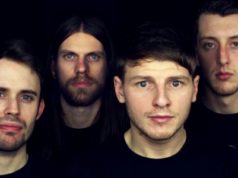 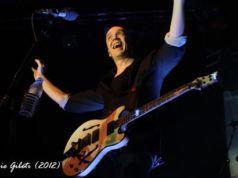 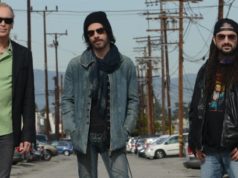 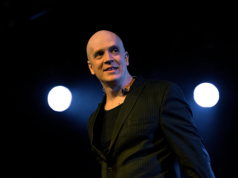 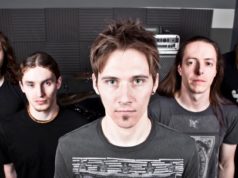