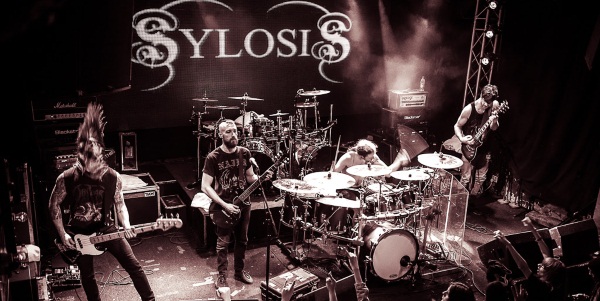 Rock Sins is on something of a news catch up this week after some holiday and the first thing we wanted to bring to our readers attention is the news that Sylosis‘ longtime (not to mention excellent) drummer Rob Callard has stepped down from his position after nine years with the band. Moving quickly to fill the breach, the remaining members of Sylosis – Carl Parnell, Alex Bailey and frontman Josh Middleton have announced that Bleed From Within drummer Ali Richardson will be taking Rob’s place. Ali will also remain a part of Bleed From Within.

Reflecting on the last decade, Sylosis now former sticksman Rob had this to say:

‘Having spent the last 9 years recording music and touring around the world with Sylosis, I have had some of the most memorable experiences of my life. Sylosis has some of the most dedicated and awesome fans and I am honoured to have played a part in music that is so well received. Unfortunately I can no longer dedicate 100% of my time to the touring schedule and therefore to be fair to the band and fans I will step down and allow another drummer to take my place.

I want to say a massive thanks to Alex Bailey, Carl Parnell, Josh Middleton, Adam Foster, Julia Matthews, John Matthews, Stuart Callard, Andrew Matthews, Neil Callard, Abby Vickers, Mike Creech, Malcolm McKenzie, Kelly Renda, Jaap Wagemaker, anyone else involved with the band and every single fan that loves our music or came to one of our shows. It’s been an absolute pleasure!’

“Very excited to announce that I am now a part of the Sylosis family. I filled in for Rob when Sylosis toured together with my band, Bleed From Within, and Devildriver. I had a total blast on the tour and had great fun playing the songs in a live environment, so it was a no brainer when they asked me to join full time due to Rob’s departure. Thanks to my brothers in Bleed From Within for letting me take on another band as well as my own, thanks to Josh, Bailey and Carl for this opportunity, and I want to wish Rob all the best for the future. Cheers!”

Ali is not an entirely new face to Sylosis fans (even those not familiar with Bleed From Within) as he filled in for Rob on Sylosis’ tour with BFW and Devildriver earlier this year. The band have released a drumcam video of Ali smashing his way through longtime Sylosis favourite Altered States of Consciousness which can be enjoyed below:

Sylosis are hard at work on their fourth album, which will be forthcoming at a date to be determined through their longtime record label Nuclear Blast. Catch Sylosis on Twitter at @sylosis.