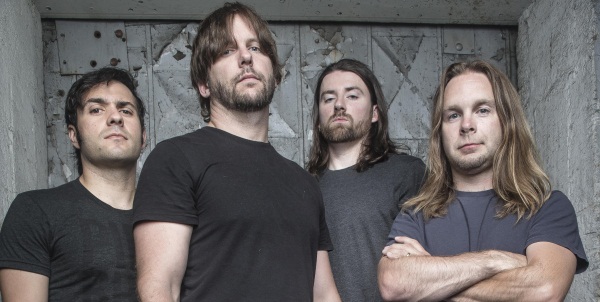 Ahead of their headline show at the Underworld in Camden, Rock Sins were able to catch up with Trevor Phipps and Nick Pierce from Unearth. With their new album Watchers Of Rule coming out it was a great chance to speak to the guys about the tour and album as well as their classic album The Oncoming Storm how metalcore as a genre has changed since they began.

Rock Sins: So you’re a couple of dates into The Hell On Earth tour, with tonight being the final UK show. How has the tour been so far?

Trevor: It’s been great, this is the sixth show and the UK has been awesome so far, it’s been small clubs a lot like this one and it’s been packed out. It’s been good fun.

Rock Sins: Have any of the shows really stood out so far?

Trevor: Are we talking about UK or Europe here?

Trevor: I think the best show so far was Turock Open Air in Essen, there was thousands of people there and it was just a great vibe. The whole city was just taken by the festival that day which was cool. There were metal stages, pop stages, just a bunch of different stuff.

Nick: Electronic stages too, it was wild. Whole streets were packed with all kinds of crazy stuff.

Trevor: Last night was good but Bridgend had something a bit more in terms of energy, it was a pretty sick show. And I’m hoping tonight will be good because London is usually the winner over here.

Rock Sins: Has it been good to hang out with the other bands on the tour?

Trevor: Yeah we’re all on the same bus so we all have to get along.

Nick: It’s more we’re stuck together than hanging out (laughs).

Trevor: Yeah but the dudes in Shadows Fall have been our friends for a long time, since we both started in the late 90’s so we’ve kinda grown up together which is a cool thing. Pay No Respect are in a van but the rest of  us are all in here together so there’s been some late nights and movie nights and sharing a couple of shots. Nothing too crazy.

Rock Sins: Unearth’s new album is coming out later this year, are you excited for people to here it?

Trevor: Very excited, I can’t wait for people to hear it. We’re all very proud of the songs, Nick had a lot to do with the writing this time as it’s his first record with us so you and Buz did a lot of back and forth.

Nick: I think 80% was probably done by me and Buz and then Ken wrote a couple of songs. Erm but yeah everything was done online, I live in Seattle and they all live in Boston so everything  was done via email or a couple of Google chat sessions.

Trevor: Just to talk about structure and stuff, then I do all the lyrics. That kinda happened over a long period of time cos Nick hurt his back which set our schedule a bit, we did a tour and then our producer Mark Lewis had other projects so we kinda had to work around him. It was almost a full year of me tracking vocals because we’d only have a few days opening at a time that Mark had so it was a difficult record to make but there’s a lot of heart and soul in it and blood, sweat and tears.

Nick: The end product is definitely what we wanted, I think we’ve achieved something we’re all proud of and I think our fans will love it and all the new kids that hear it, I reckon it’s gonna be a gateway record.

Trevor: It’s a vicious record too.

Nick: Very in your face.

Rock Sins: Have you been playing many new songs live or have you mostly focused on the older songs for this tour?

Trevor: Since no songs have been released we’ve only done one a night and two in total. We’re doing a track tonight called “Burial Lines” and that’s a later track on the record. We did the first single which is a song called “The Swarm” and we’ll be doing that one again soon but for now we just wanna focus on the older songs and tell people we have a record coming out, probably give them a taste and then next month we’ll start playing a bunch of new songs live.

Rock Sins: A lot of bands tend to do tours where they’ll play one of their old albums in full, if you could do that which album would you pick and why?

Trevor: We just did a 25 date tour in the US and Canada playing our album The Oncoming Storm and with this tour we’re not calling it that because there’s a load of bands on it so we don’t have the long set, we have almost an hour most night so we can’t do that record in it’s entirety and play other songs but the majority of the setlist tonight is from that record, we’re doing six or 7 each night from Storm so it’s kinda similar the the US tour we did just a little bit shorter.

Rock Sins: You guys were one of the first metalcore bands to break through, do you think the genre has changed much since you began?

Trevor: Yeah it’s definitely evolved, some changes are good others are bad. But we took a sound, so did other bands from that era who took their own approach to mixing metal and hardcore but it’s gone in so many different directions from there. I know for a while it seemed like labels or press were trying to kill the term metalcore, it became kinda like a bad word. But then it seemed all the bands kids gave a fuck about were playing metalcore, so now it’s just branched off into so many different sub genres of metalcore. There’s like pop-metalcore…

Nick: Deathcore, you name it.

Trevor: Yeah there’s deathcore and then there’s the stuff with electronic music and dubstep in it.

Trevor: It’s gone off in so many different directions, but we’re proud to be on the forefront of that with some other bands in the late 90’s and kinda lay down a precedent.

Nick: I think the new album kinda solidifies that too, I think it kinda opens up a wider range of what metalcore can be.

Trevor: On the heavier side of things.

Rock Sins: Do you think there are any newer metalcore bands who you feel could be quite heavily influenced by you?

Trevor: I mean yeah sure I think you can pick out bands who are influenced by us, I don’t wanna name any of them. But it’s an honour I think when you can here your influence on a bands sound and there’s some bands I think that do very well and you can tell they listened to our earlier material but that’s really cool.

Rock Sins: Finally if you could sum up Unearth’s live show in five words what would you say?

Nick: There you go, yahtzee!

Rock Sins: Cheers guys, thanks for everything.

Trevor: No worries man check out our new album Watchers Of Rule!