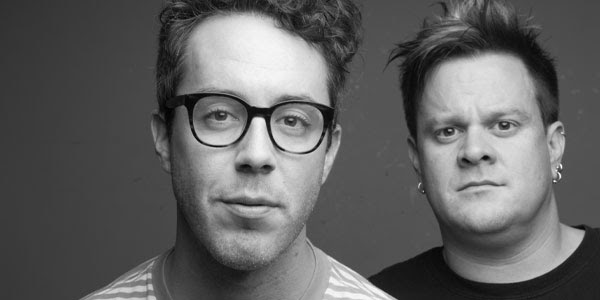 Hands up who likes songs that make you feel good? Most of you? Excellent! (There’s always a few miserable so and so’s). One of the years’ most uplifting albums is on the way courtesy of Texan indie pop-rock duo People On Vacation (that’s Bowling For Soup’s Jaret Reddick and Smile Smile’s Ryan Hamilton if you didn’t already know).

The brand new People On Vacation album, the wonderfully named “The Chronicles Of Tim Powers” will be available in CD and Mp3 collections on the 8th of December 2014 through Brando Records. The album is named after a member of People On Vacation’s Pledge Music campaign that reached it’s funding target in only a matter of days and the end result is eleven songs that will make you laugh, smile and cry in turn, all the while managing to keep a feel good air to them. The full track listing and album artwork can be seen below:

People On Vacation – The Chronicles Of Tim Powers Track Listing

The first full official music video for a song from the album (namely You May Not Believe In God) will be available soon. But in the mean time those who want a taste of The Chronicles Of Tim Powers can check out the lyric video for the song Punk Rock World below:

Lastly People On Vacation will be returning to the UK in early – mid December for an extensive tour of England and Scotland and will be their first trip to the UK since April when they teamed up with their good friends Patent Pending. Those of you who want to see Jaret and Ryan in the flesh (plus their good friend Linus Of Hollywood in support with more support still TBC) can see “People On Vacation Save The World” at the following locations:

People On Vacation “Save The World” December 2014 UK Tour

Anyone wanting tickets should head to www.wearepeopleonvacation.com/tour.php. Regular and VIP tickets are available for all shows. Regular tickets are available priced at £12 plus postage and fees or £14 plus postage and fees for London. VIP Tickets include a meet and greet, special acoustic performance and the chance to bag the best spots in the venue for the full gig.

Stay tuned to Rock Sins for further updates from the People On Vacation camp including a review of The Chronicles Of Tim Powers in the coming weeks.