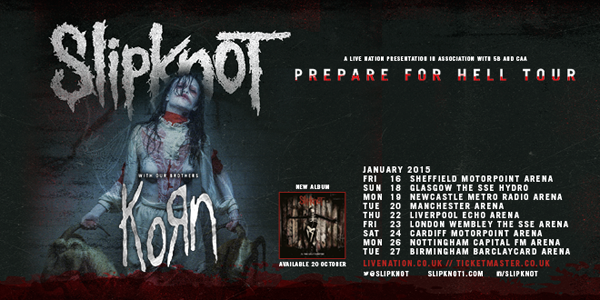 Mondays can be a bit rubbish in general can’t they? Not when Slipknot announce they’re returning to the UK for their first full headline tour over in six years they’re not.

Slipknot haven’t done a full tour in the UK since late 2008 when they sold out all over the country, including three nights at the Hammersmith Apollo in London with some mighty support in the shape of Children Of Bodom and Machine Head. Headline performances at Download and Sonisphere have occurred three times since then, most notably their début UK festival headlining performance in 2009 which has gone down in history as one of the greatest performances of all time at Donington.

Now, with new album .5 The Gray Chapter exactly seven days away from being released, the Iowan metal superstars are returning to the UK for their first full arena tour of the whole country and doing it in some style with nine shows up and down the length of the country. What’s more, they are bringing their brothers in metal KoRn with them in a repeat of the US version of the Prepare For Hell tour.

Tickets for the tour will be on general sale on Friday 17th of October at 9am at Ticketmaster on the following link – https://www.ticketmaster.co.uk/artist/763913. Keep your eyes open for pre-sales through O2 and Live Nation as well. Prices for tickets are £39.50 plus booking fees and postage. The Irish date is priced at €59.50. A fan pre-sale for tickets will be available starting TOMORROW. Those interested should register at the official Slipknot website www.slipknot1.com. VIP packages including meet and greet options are also available from the VIP Nation website www.vipnation.eu.

Slipknot’s new album .5 The Gray Chapter is released next Monday the 20th of October 2014 through Roadrunner Records and is the band’s first new album in six years. The Gray Chapter is the first album not to feature either Paul Gray (whom the album is titled after) or Joey Jordison, who left Slipknot at the end of last year. For the very latest please visit Slipknot’s official website www.slipknot1.com (if you didn’t take the earlier link above) or their Facebook at www.facebook.com/slipknot. For those who haven’t seen it or even if you have, here’s the video for the first single from The Gray Chapter, The Devil In I: 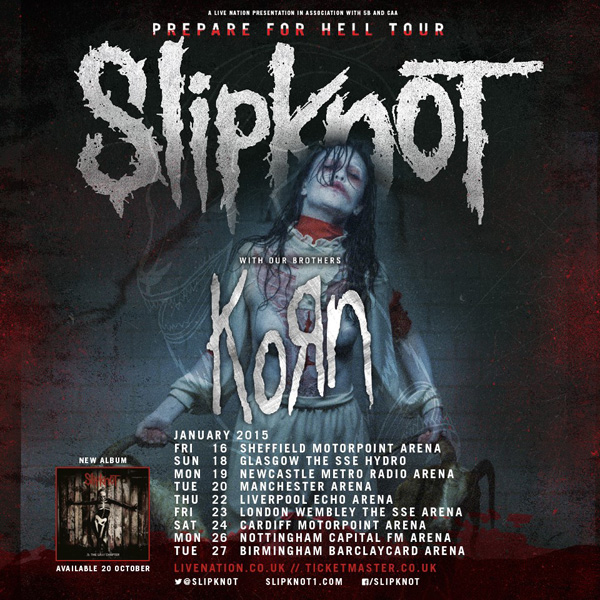