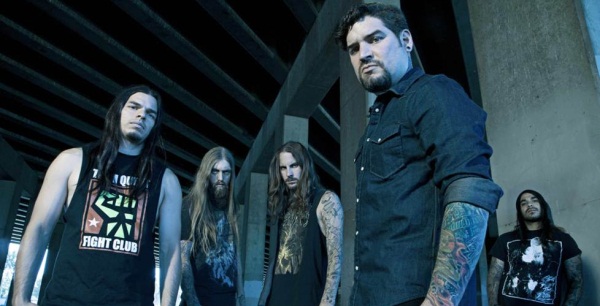 One of 2014’s most eagerly awaiting metal tours is also one that so easily could have never happened. But, happily for a lot of people, it has happened, and Suicide Silence had made their way back across the pond for their first full UK tour since new vocalist Eddie Hermida was welcomed into the fold. With a quality supporting cast in tow, Rock Sins sent James along to London’s famous Koko in Camden Town to see what Suicide Silence and co had to offer on a cold November evening….

First up, Black Tongue (9) turn out what is, genuinely, one of the best opening slots of the year. Disgusting, sludgy riffs and breakdowns are backed up by what is almost a seamless step-up into bigger venues for Black Tongue. The riffs are more than big enough to fill the greater space of the Koko but it is the bands stage presence that really makes the difference; each member projecting an appropriate sense of darkness and despair even to the highest balconies in Koko. The more nuanced lead guitar lines might be slightly lost in the mix but the riffs are more than able to hold the audience’s attention

Fit For An Autopsy, (6) in comparison, never really appear to be much more than functional. There’s nothing inherently wrong with the bands own brand of deathcore but there really isn’t anything that sets them out as heavy hitters. Definitely the weak link of tonight’s bill

Thy Art Is Murder (8) are a little bit hit and miss tonight; opening with ‘Defective Breed’ doesn’t quite ignite the crowd the way an opening songs should and vocalist CJ seems to be struggling with the enunciation of the vocals which leads to incoherent and ineffective screams. However, when they drop the biggest songs off latest album ‘Hate’ the reaction is the best any band receives tonight. ‘Purest Strain of Hate’ sees the entire front half of the Koko’s floor devolve into a mass of flailing limbs while an utterly flawless ‘Reign of Darkness’ to close makes EVERYONE lose their minds. A flawed performance, but, at it’s best one that would be hard for any band to top.

Suicide Silence (10) though, are not just any band. They’ve come back from tragedy with the strongest album of their career to date and have been utterly flawless since.  Both tight and accomplished performers, ‘Suicide Silence’ also know how to inject a healthy dose of fun into their set. Not an easy task with a back catalogue that includes song names as tasteful as ‘Bludgeoned to Death,’ ‘No Pity For A Coward’ or newer cuts like ‘Cease To Exist.’

Its also partly down to their back catalogue that Suicide are such a fantastic live act in 2014. Where Thy Art have about two utterly monstrous hits Suicide have a full hour set rammed with them and enough left over to easily add another fifteen minutes. Indeed, this is the only complaint that you could level at tonight if you were feeling particularly churlish: it’s just too short with ‘You Only Live Once’ fading out at the disappointingly early hour of 9:30. But really, this is just nit-picking; Suicide Silence are back and hotter than ever. The only way is up.

Fit For An Autopsy – The Sea Of Tragic Beasts