I’ve done close to 100 interviews this year, some have been great, some strange, and some utterly bizarre. My favourite by far, was chatting to the lovely Harriet Bevan at Damnation. The frontwoman from doom lords Black Moth is not only incredibly talented musically, infinitely articulate and stunningly beautiful, she is also one of the nicest and natural people we have ever interviewed. Join us as we talk influences, university and the future of Black Moth.

This is Lisa Fox for Rock Sins, and I am here with Harriet from Black Moth. How are you?

I’m great thank you. How are you doing?

I’m very well, thank you. So how was the show at Damnation today?

It was awesome, really good fun. I didn’t really know what to expect and I wasn’t sure what room we were playing in. We got there and the first thing that hit me was that it was a room that I had done a few exams in. So that was a nice surprise, obviously it was a bit more fun today than it was slaving away at those English exams. The room was rammed as well which was awesome, a really good crowd.

Fantastic. So you guys played Dessert Fest this year?

How was that for you?

Oh I love Dessert Fest. It is the most fun in the world, amazing bands, the line-ups are always ridiculously good and really varied. I love it, and Belgium was really brilliant as well. We were quite a late addition to the bill, but we were very lucky to get on that and it was an amazing day. It was just a really cool place, the venues were awesome. I liked it a lot.

Last year I worked at merch at Dessert Fest London, and your merch was there all weekend. Everyone wanted the tote bags to carry records in.

I thought we never sold any of the tote bags.

Oh no we sold loads of tote bags last year.

Oh that’s good. I thought that we had done a mis-fire on that one and actually no metal heads wanted tote bags. There we do. I’ll get some more.

Black Moth work really hard, is it important for you to be on the road?

Oh god yeah. We don’t even question it. We have been doing it for so long now that it would almost be stupid to slack on it. We have literally been doing this since we were kids, and it means the world to us, it is what we love. The hard working thing just comes naturally. And also it is just hard work. I always think I’ve got an amount of respect for just about any band because it is damn hard work for the very little reward. I suppose it is an addiction really. You’re constantly chasing that high of playing those shows.

The buzz of it. Is that your favourite part?

I think so. I mean it is very rewarding making a record you are really happy with. But that is a slow burner, a lot of hard work, and then you get the reward a bit later. But playing live is an instant high, just being in the music and sharing it with a room full of people there and then, which is why I don’t like people recording live sets. I think I’m much more about it being, you’re here right now, that is it. Come to another gig if you want to see us again. I think there is something you just can’t capture about being in the room with them there and then. But that is just me.

Did you say you studied English?

I did yeah, here.

How did you end up doing music then?

Good question. Why did I do it? I loved English, and to be able to spend three years reading books and writing about them is a real privilege. I loved it. Even before I started studying English I was already in bands, and that is what I was doing. I don’t really know what I thought I was doing when I was doing English. I certainly all the way through knew I wanted to be in a band, but it has probably helped with my lyric writing I guess and just general life education. But I loved it. I suppose my attitude to music as well has always been – I’m a singer at the end of the day, I don’t have any theoretical training or anything like that. When I write music I just write whatever comes to me and I write the lyrics. I suppose English works.

So who inspires you musically?

Oh god so much. Usually things that inspire me most are musicians who are constantly questioning and changing what they are doing. Daring to do different things, daring to bring out an album that is totally different to their other work, that kind of thing. I have to say, in terms of inspiration, I was thinking about this the other day, about which specific musicians have inspired me… I always used to deliberately not say female musicians when I was asked that because I just thought it was too obvious, and I don’t like being lumped together with female singers. But if I’m being perfectly honest I think that the most inspiration for me has come from seeing women on stage, like Donita Sparks from L7 and PJ Harvey was a massive influence. I don’t think I can really over-estimate how important that was for me to see women on stage doing it. I think otherwise if you don’t see that and you are not exposed to it you almost don’t really know if you can do it, because it is such a man’s world. It is far more often you see men in this genre. Also I suppose Kim Dale as well from Breeders, I went to see the Breeders when I was very young and I was really excited to see women up there rocking the stage. I suppose they were the big inspirations.

And now you are one of the ones inspiring future generations.

So what are your plans for the rest of the year and going into next year?

Towards the end of this year we have got three weeks in Europe, November, December. And that is going to be pretty great, and then in the New Year we have got a gig on the 26th January at the Chackwell Arms in London. And then after that I think it is going to be more gigging and touring. We start writing the third album. We have already got cracking with that. I’d love to play more festivals. We are hoping to get some of them nailed next year which would be really nice.

Yes please, thank you Andy. We played Download a couple of years ago, it was incredible. Again, we just had no idea that it was going to be as well received as it was. The tent was full and it was probably one of our highlights as a band, it was really special.

If you had to give yourself a message five years ago what would you say to yourself?

Stop worrying for god sake. And I think I could say that to myself now in five years’ time from now. One thing I have learned is to just enjoy the ride. Five years ago I would have been stoked to see the sort of things that we are doing now as a band. In a way it didn’t really matter to me because the thing for me was always just playing gigs and writing the music. I think I’d have carried on doing it, and I will carry on doing it no matter what happens, whether we get massive or whether we just end up playing in pubs till we are in our sixties. But I think one thing I’ve really learned is to just live in the moment and selvedge what joy comes of this and just see what happens and take it as it comes.

Just enjoy the ride. I love that whole ethos from the seventies of just live free and be happy and do it.

Well yeah it is the only way to be really. I’m a massive believer in that. Live in the now man.

Exactly. So what is the most crazy thing that has ever happened to you so far? Just because of living in the now.

Just because of living in he now – I don’t know. I think sometimes the idea of being on the road is a lot more mundane than people realise. We do a lot of crosswords. It was quite amazing when Donita Sparks from L7 got in touch with me because I mentioned her in an interview, and what a big inspiration she was. Her husband sent me a message on Facebook and I have ended up in fairly regular contact with her. That was pretty wild, because she is just such a huge hero of mine from my youth. They really did show me that you can do whatever the hell you want, and so to actually be able to count her among my pals now is actually a really nice thing.

So the site is called Rock Sins, what is your biggest rock sin?

Oh god, that is a tough question. The trouble is I don’t believe in sins. I have no shame. People always ask me what my guilty pleasures are and things like that and I don’t have any guilty pleasures. I think a pleasure is a pleasure. And sins are a pleasure, so that is all I can say.

That is probably the best answer I think I have ever had to that question, so very well done, I like it.

I can only apologize.

No don’t at all. Thank you very much for talking to me. You are really lovely.

You can also check out a review of Black Moth’s performance at Damnation where as Harriet said they performed in a packed room where once upon a time she took some of her English exams – the review is available to read here. Please follow Black Moth on social media – @blackmothmusic on Twitter and https://www.facebook.com/themothpit on Facebook. 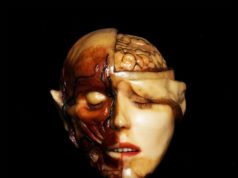