With the recent news that Sonisphere Knebworth won’t be happening in 2015, booking bands just got a lot easier for the Download Festival – not that they generally have problems anyway. The latest batch of rock, metal and alternative acts have just been announced by Andy Copping and his team for Download 2015, and it’s another great collection of bands.

Topping off the latest batch of bands to join the fun at Download 2015 are Swedish metal legends In Flames. Having had to cancel their appearance at last years’ Download, Anders and co are back twelve months later to put that to rights. Alongside them are one of the finest thrash metal bands of all time, the mighty Testament! Donington Park in 2015 will also see the debut of the ultimate metal party man in the shape of Andrew WK. Recently reactivated grunge rockers L7 will also play one of their first shows in fifteen years at this years’ Download Festival.

Those who like their classic rock will have plenty to shout about with British rock legends Thunder returning to Download, alongside fellow riff veterans Black Star Riders and former KISS man Ace Frehley (lets hope if he plays on the Sunday he doesn’t bump into Gene Simmons backstage!). Alter Bridge and Creed fret manipulator Mark Tremonti’s solo project Tremonti will also be appearing at Download for the first time.

In the news at the moment for his departure from Asking Alexandria, Danny Worsnop brings his new outfit We Are Harlot to Download for the first time, where they will be joined by more debutants in the shape of Chelsea Grin and Stray From The Path. After having one of the biggest crowds in the whole weekend at Bloodstock last year, Evil Scarecrow will bring their unique show to Download for the very first time.

Fresh from their well received appearance on the Prepare For Hell tour with Slipknot and KoRn, King 810 will also be attempting to make up for their non appearance at Download last year following some legal issues that occurred just before Download 2014, with their compatriots HellYeah, All That Remains and The Ghost Inside all returning alongside them. Defeater are another band who also return to the Download line up in 2015 having been unable to fulfill their original booking last year.

Alongside the likes of Black Star Riders and Evil Scarecrow, there are plenty more British bands who’ve been added to the line up; Goth rockers Fearless Vampire Killers, raw punks Gnarwolves and south coast metallers Creeper. The international flavour also continues with Swedish metallers Bombus and Aussie rockers Hands Like Houses joining the line up which is rounded out by Blood Youth.

All of the above bands join headliners Slipknot, Muse and KISS plus the likes of Judas Priest, Faith No More, Motley Crue, A Day To Remember, Five Finger Death Punch, Slash and Myles Kennedy and many many more at the 2015 Download Festival.

Tickets for the festival, including the last few remaining “RIP” packages (which are always hugely popular), are available now at the official website www.downloadfestival.co.uk. Further line up announcements will be made in the coming weeks and months, and as soon as any more announcements are made you’ll be able to read them right here. 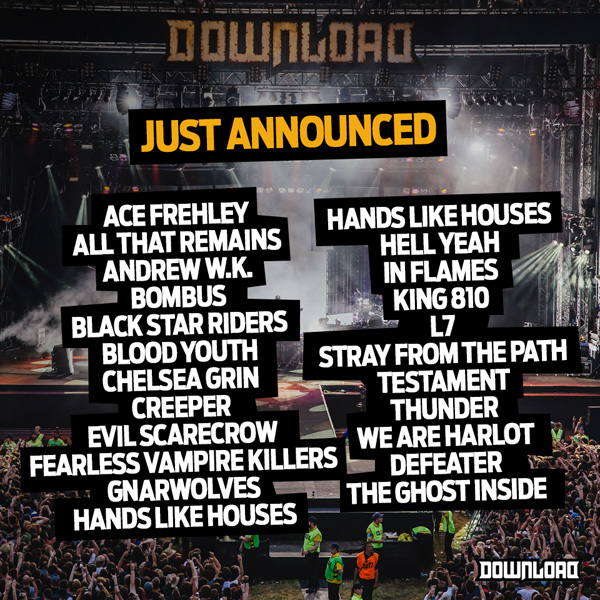