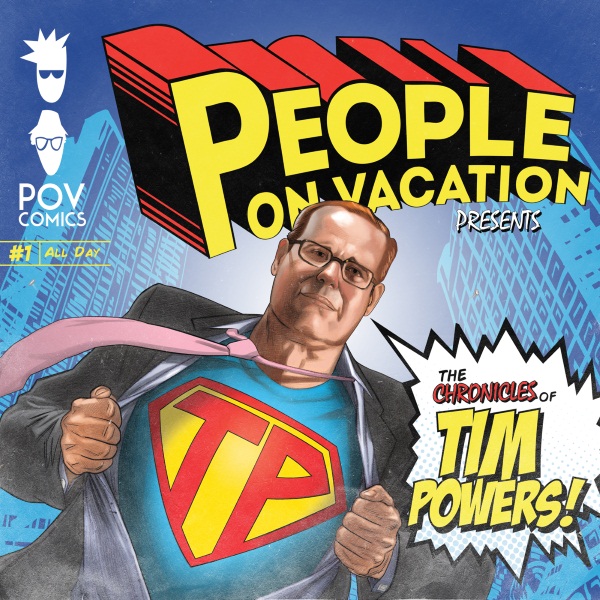 People on Vacation’s new album is an enigma. Caught somewhere between a hopeless despair and a passionate, intense belief that everything will be alright in the end, The Chronicles Of Tim Powers is the indie rock duets best release yet and sees them flexing their songwriting muscles.

The schizophrenic attitude of the album is evident even within the first twenty seconds of excellent album opener Don’t Ask The Question. This is mostly down to the brilliantly divided vocal duties; Bowling For Soup’s Jarrett Reddick brings his nasally best to the choruses, but it’s Smile Smile’s Ryan Hamilton who’s the real highlight here. Hamilton brings a real sense of maturity to People On Vacation’s sound with his melancholic, floaty, indie-fied voice that is perfectly suited to Chronicles lyrical content.

The album deals with love, heartbreak and moving on. It addresses these with a delicate blend of sincerity and humour; though at times it feels like Hamilton is just about keeping Reddick in check, stopping him bursting forth with toilet humour and dick jokes, but they manage to pull it off nonetheless. The sickly humour gets a bit over the top on You May Not Believe in a God, where Texan ridiculousness outweighs any sentiment the song might have had; it’s a good song, but it feels like it belongs on a Bowling For Soup release rather than here.

In contrast to that, All I Ever I Really Wanted has a lovely, somber attitude – the lyrics are well written, painting a stark, sad picture of heartbreak – and the acoustic guitar and bells providing the instrumentation fit perfectly. It’s one of the best songs on the album, though would arguably be better off with zero Reddick involvement, as his constant, sugar-high enthusiasm threatens to ruin the morose tone.

Musically the album is pretty diverse, with the pair dabbling in all sorts of different genres. There’s a chunk of electronic influence, there’s a gospel choir, there’s country, there’s the obvious pop punk stylising and Journey to the End provides a ballad brimming with pop sensibilities. It all contributes to creating quite an eclectic album, but despite that it still manages to sound cohesive, with the pairs vocals guiding the listener through their struggles.

The most interesting thing about Chronicles is it’s utter refusal to be classified. In 2014 and the beginning of 2015, pop punk and emo have both been undergoing a resurgence, and it would have been easy for Hamilton and Reddick to pick one and run with it, but instead they’ve crafted a unique sound for themselves. People On Vacation are a unique band in a unique position, and it’ll be interesting to see where they journey to from here.

People On Vacation’s The Chronicles Of Tim Powers is released on February 2nd 2015 through Brando Records & Que-So Records.