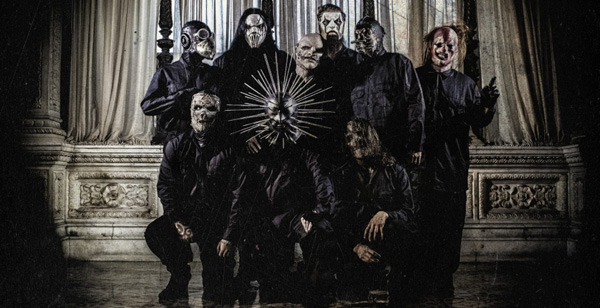 Well well well, this is a night that has been a long time coming. I’ve been a self confessed maggot since 1999 but have somehow never managed to see my favourite band play ‘indoors’. Well, tonight that 16 year streak of misfortune ended, when I witnessed, no, I experienced, Slipknot Prepare For Hell in Glasgow.

First though, we have rising stars King 810. Far from contrived wannabe hardmen, what we actually see on stage is 4 normal guys who happen to come from an abnormally violent background. Vocalist David Gunn doesn’t seem totally comfortable in front of the large crowd, in fact he appears to be more shocked than anyone that his band from Flint, Michigan are opening for Slipknot. Commencing with ‘Killem All’, it isn’t till fifth song ‘War Outside’ that David really relaxes, and we see a spark of what a phenomenal frontman he can be. Final track, ‘Fat Around The Heart’ is a truly regal experience that lets us glimpse inside the brutal world of King 810. The crowd aren’t jumping about, but they aren’t leaving either. They are watching in appreciative silence, trying to figure out what they are seeing. Know what though, whatever you think of them, King 810 inspire one hell of a reaction… and that, after all, is what music is all about. (8)

With only 40minutes to play, we know going in that KoRn‘s set is going to be ferocious. What we did not expect was the barrage of bangers that drag us down memory lane (‘Twist’, ‘Here To Stay’) before hurling us in to the future (‘Love & Meth’, ‘Hater’). The ecstatic response of the crowd propels us back in to the present day, with the realisation that Korn are one of the seminal bands of our generation (‘Freak On A Leash’ and ‘Blind’ anyone?). Between the power of Fieldy’s bass and the punch of Munky and Head’s guitars, Korn are musical perfection.  The set is not without humanity however, as the band play a trick on frontman Jonathan Davis by pretending to fluff the intro to ‘Good God’, only to surprise him with a birthday cake before resuming the song. Shocked and delighted in equal measure, the vocalist squeals “You guys are dicks! I thought we fucked up!”. The birthday surprises don’t end there though, as members of Slipknot invade the stage and present the bashful birthday boy with a second cake at the end of their set. KoRn are a band that never fail to delight, and tonight is no exception. (9)

The haunting echoes of ‘XIX’ ring out across the crowd, as an elegant white curtain ripples in front of the huge stage. The time has come for the main event, Slipknot are here. A spotlight appears as Corey Taylor‘s agonised vocals ring out across the room. As ‘Sarcastrophe’ kicks in the curtain flies up and reveals a giant illuminated goat’s skull looming over the crowd. The crowd surges forward as percussionists Shawn Crahan and Chris Fehn are thrust upwards on their trademark rising drum kits, like pillars of metal guarding the stage.Clown leers down from his pedestal, master of all the maggots below. The set resembles a circus of horrors, complete with a giant illuminated goats head, a hell of a lot of fire, a clown and magic mirrors. It is an audio and visual spectacle like no other.

The stage is literally on fire as Slipknot bash out stunning renditions of ‘Before I Forget’,’The Blister Exists’ and ‘Dead Memories’. The real hilight are me are the newer tracks, ‘The Devil & I’ and ‘The Negative One’ are sure to be remembered as classics for years to come. Ok, so the set isn’t perfect but it is still vastly superior to 99% of the bands on the scene. There are glitches in the sound, a few noticeable omissions (particularly ‘Left Behind’ and ‘Pulse of the Maggots’) and the order of play is not to my liking, but when you’re in a band the size of Slipknot, you’re never gonna please everyone. Besides the crowd response is immense, as Corey himself says “Its not often the great big mouth is lost for words, but holy shit Glasgow”. Changing it up each night, you never know what mix you’re going to get, and we are treated to ‘Opium Of The People’ and ‘Disasterpiece’ as well as the outrageously good ‘The Blister Exists’, during which Chris pulls a bunch of flowers from his kit and hands it to a lucky lady on the side of the stage.

Slipknot close the main set with a storming rendition of ‘Spit It Out’ followed by what was, in my opinion, the best performance of the night, the violently insightful ‘Custer’.  Before returning for an astonishing encore of ‘(sic)’, ‘People=Shit’ and ‘Surfacing’. As Slipknot leave the stage for the last time, ‘Till We Die’ plays; a haunting reminder to the maggots that the 9 will always live through the beating heart of metal; Slipknot. (9.5)

The Prepare For Hell tour with Slipknot, KoRn and King 810 continues across the UK for the next week or so, stopping off at the following locations:

Remaining tickets can be purchased directly from Live Nation at https://www.livenation.co.uk/artist/slipknot-tickets. We cannot recommend this tour enough. If you don’t have a ticket yet, snap one up before it is too late. YOU WILL NOT REGRET IT!

Not enough Slipknot for one day? As far as we’re concerned there’s no such thing as too much Slipknot – so please check out Rock Sins huge exclusive interview with the one and only Chris Fehn (aka #3) from The Knot themselves backstage in Glasgow right here as he discusses a huge variety of topics. Further coverage from more dates of Slipknot’s Prepare For Hell tour will also be forthcoming over the next week so please keep visiting Rocksins.com regularly!