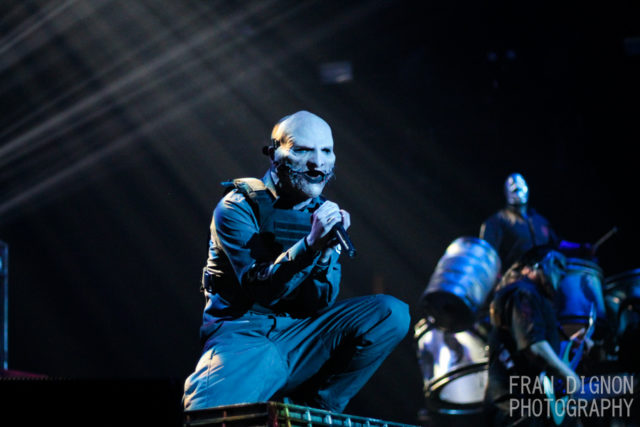 Slipknot in the flesh are a band that make people put down the camera and the phone and live in the moment.

Slipknot’s first full UK tour in over six years has been eagerly awaited since the day it was announced some months ago. Throw in the fact the Prepare For Hell tour also had KoRn on board, and the biggest metal tour of the whole year was set to take place before January was finished. With a sold out Wembley Arena in London eagerly awaiting Slipknot’s first show in the capital since December 2008, Rock Sins wasn’t about to miss out on what was due to be a momentous evening.

Much to the annoyance of many in attendance including this reviewer, the chance to see whether King 810 lived up to their hype and good review from the Glasgow date of this tour (read that here) disappeared due to the almost hour long wait to get into the standing area at Wembley. As a result, by the time the stage was in view it was almost time for one of the best support bands one could hope for.

With the strains of Twist in the air and looking full of energy and enthusiasm, KoRn (8.5) took the stage and promptly set about putting London in the palm of their hands. Fieldy’s chuggy bass tones resonated through the perfect tuned Wembley sound system as KoRn ripped through the likes of Here To Stay, Right Now and Falling Away From Me.

Jonathan Davis, kilted and sporting a huge grin on his face a lot of the time was rolling back the years with a tremendous vocal performance throughout. Shoots & Ladders was suped up by the addition of part of Metallica’s One which nearly brought the house down before Got The Life & Freak On A Leash reverberated around a full arena which was in full party mode. “We’ve been workin’ on somethin special just for tonight” announces Jonathan, at which point half of Slipknot appear on stage. What’s more, Chris and Clown are wearing a puffer jacket and a polo shirt respectively. What follows next was rightly described by fellow Rock Sins’ writer Sam Dignon as “a moment” with a KoRn / Slipknot cover of the Beastie Boys Sabotage making Wembley erupt. Follow that with a closing Blind, and you could have easily witnessed a headline performance. KoRn got everyone ready for Slipknot in true style. 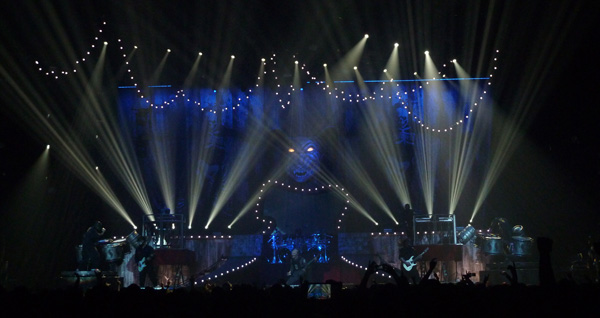 Slipknot (9.5) were utterly mesmerising from the second the opening, haunting XIX kicked in. An opening salvo that included Sarcastrophe, The Heretic Anthem and Psychosocial was never going to be anything other than an overwhelming success. The new material from The Gray Chapter all sounded phenomenal, aside from a minor hiccup with the sound during the otherwise excellent Devil In I, and every word was hollered with venom back at Corey and co by the twelve thousand plus maggots in attendance. Every member of Slipknot was on top form atop the dark, menacing staging, with Sid Wilson’s smile almost visible under his mask as he threw himself around the stage from top to bottom.

At one point in the set, having surveyed the carnage unfolding all around, something was evidently noticeable; There was barely a single camera, phone (or god forbid, tablet) in sight. Just nine people on stage united with twelve and a half thousand fans going thoroughly batshit and embracing the music and the experience. If ever it was in doubt, Slipknot in the flesh are a band that make people put down the camera and the phone and live in the moment. Then again, when you can look all around and everywhere you turn people are screaming “You can’t see California without Marlon Brando’s eyes” back in your face, it’s of little surprise.

The last half hour or so raised the bar yet further with every song having more impact than the previous. Duality & Before I Forget were both sung so loudly the choruses are likely to still be echoing round the rafters at Wembley as you read this. Spit It Out (as standard) inspired sheer wanton destruction, with this reviewer taking out one of his Rock Sins colleagues upon Corey’s command of Jump The F**k Up. Meanwhile, the chorus of main set closer Custer live is something akin to a religious experience, albeit one that causes thousands of people to bounce like their lives depend on it.

The encore, as one might have expected, was designed to drain every last drop of energy from the incredibly willing assembled maggots inside the sold out Wembley. Collectively they obliged, giving everything as a continuous sea of bodies moved, jumped, moshed and crowdsurfed around the arena floor to the triple punch of (sic), People = Shit and an almighty sprint through Surfacing to finish off.

“We will see you sooner than you think” was part of Corey’s parting message to an adoring crowd – we’re not entirely sure we agree considering we’ll be seeing him and the rest of Slipknot in less than five months at Download. That being said, few shows throughout 2015 have even the faintest hope of being as good as this one and it underlines just how much everyone present would like another Slipknot UK arena tour at the earliest opportunity. Brutal in the most enthralling manner, Slipknot as a live entity are as good as they’ve ever been, and that is very good news indeed.

If this review wasn’t enough for you, Rock Sins has full photo galleries of both KoRn and Slipknot from this amazing night at Wembley on the Prepare For Hell Tour. You can check them out on the links below:

Please also check out our interviews with all three bands from the Glasgow date of the 2015 UK Prepare For Hell Tour, links are below:

Whenever we have any more news on Slipknot, KoRn or King 810, you’ll be able to read it right here at Rock Sins so keep checking back with us regularly.