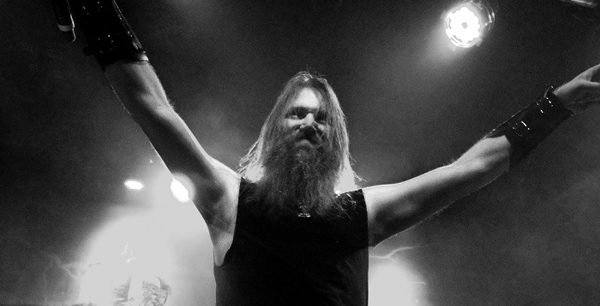 Kicking off 2015 with a bang, the mighty Amon Amarth have been tearing up the UK at a number of intimate gigs, with support from Huntress and Savage Messiah. On Saturday the 24th they landed in the cold and gloomy Stoke-on-Trent to add a little unforgettable Viking touch to everyone’s lives…

As an eight year old thrash band from London, this was a massive gig for Savage Messiah (8) and they certainly kicked off the night to a blisteringly fast start. Opening with ‘Iconocaust’, Savage Messiah quickly had the crowd engaged and singing along with every single lyric regardless of whether they were a fan or not. Although getting off to a brilliant start, frontman Dave Silver ran in to technical difficulties when his guitar and amp would not cooperate, forcing him to retire the instrument and stick purely to vocals, which would surprisingly benefit the band for the remainder of the set. Allowing the crowd to witness the frontman without an instrument, it became quickly obvious that his stage presence is very much akin to Bruce Dickinson (Iron Maiden), and the energy created by one man alone sent the room into a frenzy. An amazing opening job done by a powerful band.

Following on from such an energetic opening act would be a difficult task in itself, but Huntress (5) didn’t quite live up to the expectations. Frontwoman Jill Janus is well known for her goblin/witch like stage presence; however it only ever came across as slightly uncomfortable and somewhat awkward, as attempts at crowd interaction failed to be reciprocated at all. Picking out the Huntress fans in the room was not a difficult job though, the majority may as well have been glued to the barrier and constantly made sure they stood out from the rest, by going absolutely crazy. Although disappointing for the first 20 minutes of the set, the same cannot be said for the remainder. Interest within the crowd peeked when Jill Janus announced their next song, ‘I Want To F**k You To Death’ and suddenly the majority were moving and energy flowed, it became very apparent that everybody was genuinely enjoying themselves. Regardless of the less than amazing set, Jill Janus’ vocals will always be a massive highlight of a Huntress show. With a set of lungs like a pair of balloons and a vocal range that could shock even Pavarotti, just listening to the frontwoman sing is definitely an unforgettable experience.

It was surprising to see Amon Amarth (10) performing a gig in such a small, venue such as The Sugarmill. With the sold out crowd near to bursting point (even dangerously filling out the whole second floor balcony), it was amazing that the gig still felt intimate. The Swedish metalheads are known for their use of pyrotechnics and stage props. As it was impossible to have in the smaller venue, it became questionable as to how the band would create the usual atmosphere; but they certainly managed it.

With a ‘Deceiver of the Gods’ back drop lightly swaying and a harsh blue light coating the room, the intro to ‘Father of the Wolf’ began playing. The atmosphere in the room was already bursting with excitement, the crowd absolutely roaring as one by one the band made their way onto the stage. Constant intense energy was being created as frontman Johan Hegg’s astonishing vocals projected across the room for all songs, the crowd interacting and moving with every rhythm. Unusually for Amon Amarth, the setlist included songs they very rarely play live from 2011’s Sutur Rising such as ‘For Victory or Death’,’The Last Stand of Frej’ and ‘War of the Gods’, which of course went down amazingly well with the crowd – an absolute treat for everybody there.

Finishing the set with ‘The Pursuit of the Vikings’, Amon Amarth clearly wanted to end the night with a bang. With Johan Hegg encouraging the crowd to repeat the lyrics after him, even if they didn’t know the song, not one person in the room stayed silent. Definitely one of the most memorable and energetic Amon Amarth gigs of all time.

Please also check out our exclusive photo gallery of Amon Amarth & friends from The Sugarmill below!