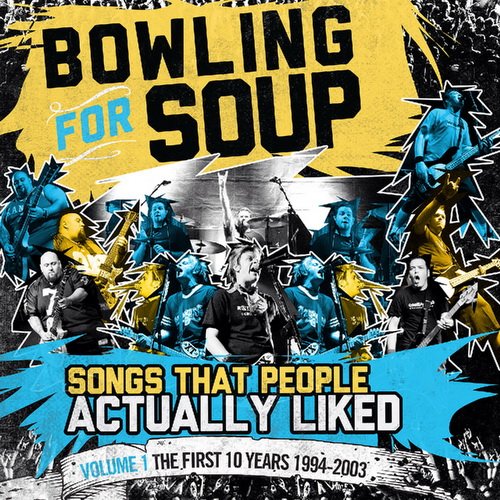 In 2011, Bowling For Soup’s ex-record label released “The Very Best Of Bowling For Soup” without the bands consent. This new, officially authorised release (humorous titled Songs People Actually Liked Volume 1) is almost a reaction to that album. On the Pledge Music campaign that funded this, frontman Jaret Reddick said that the band felt that the twentieth anniversary of the mighty Soup was the time to finally “do it right.”

And boy, did they do it right. Not content with just one album to cover their expansive career, the band decided to split it down the middle and release two albums – one for each decade. As far as pop punk back catalogues go, Bowling For Soup’s is almost untouchable and this album demonstrates that. Only the best of the best from the bands first ten years is featured here, with mega hits such as “Girl All The Bad Guys Want,” “Punk Rock 101” and “The Bitch Song” lined up alongside lesser known album cuts like “Dance With You.”

The best thing about this greatest hits compilation is that, unlike so many others, it doesn’t simply seem like a cash grab. It’s not just a re-release; in addition to the now compulsory new song, 20 Years (That’s A Lot Of Beers), each of the classic tracks have been completely re-recorded to now sound tighter and even more singalong-able than ever before. The re-recordings don’t lose any of the punch of the originals, and there have been no changes or modernisations applied; everything has been re-done here to a precise standard.

Not to downplay the new song, however. 20 Years is a perfect celebration that Bowling For Soup has even managed two decades together. The lyrics are reflective and genuinely funny (we haven’t lost any hair/we haven’t lost any pounds/we haven’t lost any fans/cause we’re the best fuckin’ band around!) and the musicianship faultless if not especially challenging.

Songs People Actually Liked Volume 1 is the perfect place to start for BFS beginners. As for those who are long time Bowling For Soup fans, it breathes new life into some much loved songs and neatly has them all in one place with some little touches for those who’ve been with the band since the early days (The minor lyric change “Did you just say that again?” on Punk Rock 101 is one such example). A finer collection of pop punk songs you’ll be hard pressed to find in 2015, unless perhaps it is Songs People Actually Liked Volume 2.