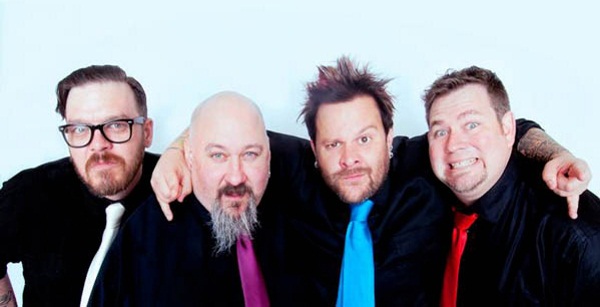 Just after the release of part one of their greatest hits album, Songs People Actually Liked, Bowling For Soup’s lead singer, Jaret Reddick, was kind enough to give an interview with Rock Sins’ Will Stevenson. Here it is!

Could you tell us a little about the re-recording process what was it like to revisit these old songs?

Jaret Reddick: It was pretty much our normal formula for this day and age. We get in the studio, Linus of Hollywood, and I do a set of scratch tracks, then the guys start playing over those and then I sing…
It was AMAZING to hear the old songs come to life. I think all of us were surprised by a few of them.

What made you want to release this huge greatest hits album?

Jaret: I just think it was time. At first it was something I wanted to do for our 20th birthday, but it was too much of an undertaking to cover the entire 20 years so breaking it up made it manageable and leaves the door open for other fun stuff down the road!

How did you decide which tracks to include?

Jaret: First we picked the obvious ones. Songs that had a video or had been some sort of single. Then it came down to fan favourites as well as songs that had an impact on the band in some way. It wasn’t easy!

As pointed out in your new song “Twenty Years,” you’ve been doing this punk rock thing a while now. Do you ever get the urge to change musical direction?

Jaret: Not with Bowling For Soup. I am so lucky to be in this band, I love it. And I think our fans expect a certain “thing” from us, I know I do! So I get doses of other musical direction with other projects…Namely People On Vacation and Jarinus.

Do you listen to pop punk? If not, what genres do you tend to listen to?

Jaret: I am a music fan. I literally listen to everything! Except the Blues. I hate the fucking Blues!

A lot of pop punk produced these days is more serious and ’emotional’. Do you feel pop punk has lost the comedic style that influenced it before and is this a positive or negative change?

Jaret: I think a lot of us chose comedy as an element to add in the early days. Most bands moved on from that after a few years. I look back on many of those bands and see that becoming serious may have actually taken the fun out of being in a band in the first place. I am generalising, but we have all seen it happen, time and again.

But I don’t feel like humour was ever a required ingredient. For example, Green Day had some funny stuff from time to time, but I wouldn’t have ever considered them a humorous band. New Found Glory is another one. Same thing. I like some of the new pop punk stuff. I read a lot of people giving current bands flack for being to commercial…Have we forgotten that pop punk has the word POP in it? That’s the same shit that happened to BFS when we got played on pop radio, a genre we helped create was too cool for us. And we continued laughing, for over 20 years now!

Would you ever do a ‘serious’ album?

Jaret: Not in Bowling For Soup, we have serious songs but the smirk will always be in our swagger!

You’re known for having an especially funny live show. Have you considered doing a comedy tour with no music?

One of the rewards from the pledge music campaign was a round of golf with the band. Who is the best golfer?

Jaret: Probably Chris, but Gary is pretty good too. I just started playing again a year or so ago, I am coming along…We take Erik for comic relief!

Thank you for your time.
Jaret: Thank YOU!

Bowling For Soup’s brand new album Songs People Actually Liked – Volume 1 – The First Ten Years 1994 – 2003 is out now on Brando & Que-So Records. You can check out Rock Sins review of the Pledge Music funded album on this link here. Jaret Reddick is available to follow on Twitter at @jaret2113. He is also returning to the UK this week with People On Vacation for a huge UK tour, the details of which can be found here.